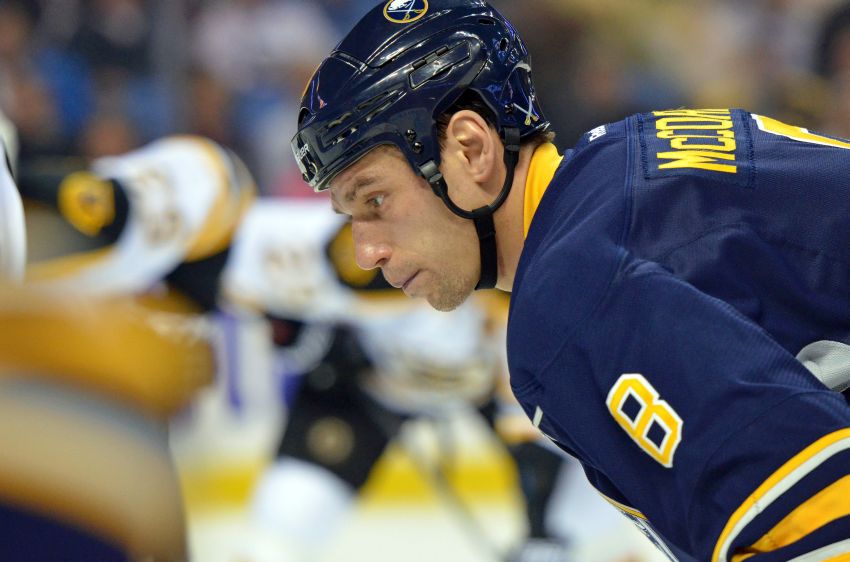 BUFFALO – On Jan. 3 in New York, gritty Sabres forward Cody McCormick blocked a shot, something he has done 126 times in his career.

This time, however, the pain felt different. It lingered.

“I had pain in my calf after for no real reason,” McCormick told the Times Herald during the first intermission of Sunday’s 3-2 loss to the New York Islanders inside First Niagara Center.

McCormick didn’t know it then, but he had developed blood clots that would spread to his lungs.

The 31-year-old played three straight games after blocking the shot, only missing some practice time. In his final appearance this season, a 2-1 loss Jan. 9 in Tampa Bay, he scored a breakaway goal.

McCormick wanted to get examined when the Sabres returned from their road trip. On Jan. 10, he took his daughter, Aubrey, to the rink for some “daddy-daughter time,” he said. The team told McCormick to get looked at then, so he had his wife, Alyssa, pick up Aubrey.

Right away, a CAT scan found clots in McCormick’s lungs that originated in his calf. He spent two nights in the hospital. It hasn’t been determined if blocking the shot caused the clots, he said.

McCormick’s just glad he was examined in time.

“I didn’t want it to go much longer than that, just the research and reading the Internet, you read some pretty negative things on the Internet,” he said. “So I try to keep my mind off that part of things. But there’s definitely a danger to them.”

McCormick is hopeful he can return in September for training camp. He has no clear timeline, however.

“That’s all I can really think about, I guess,” he said about next season. “I don’t want to think the other way. So I try to focus on that.”

“Now it’s taking medication on my end,” he said. “The medication keeps me from playing hockey.”

It doesn’t keep him away from the rink, though. McCormick has been watching games in the press box recently. When his teammates practice, he works out.

“I come in, I hang out with the guys,” he said. “It’s a great group of guys just to chit chat with.”

Naturally, the experience has been grating at times. McCormick, who plays an up-tempo, tenacious style, is already getting restless.

“It’s not like any other injury where there’s pain. I feel fine,” he said. “I think that’s the frustrating part, where I’m not able to do what I want.”

But he understands he must wait and let the medication help him.

“I’m still educating myself on it,” McCormick said. “It has to dissolve, and the blood thinners make it so you can’t put yourself in a position to be injured. They’ll be a couple checkups here and there, but for the most part just let the medication do its work.”

McCormick returned to the ice briefly Saturday morning before his teammates skated. He just wanted to help Marcus Foligno with some drills. He wasn’t even wearing his full equipment.

“It was just fun to get back on the ice, shoot, pass – that sort of thing that you miss when you’re not out there,” McCormick said.

The Sabres, who had Monday off, host the Ottawa Senators tonight.

One thought on “Sabres’ Cody McCormick had blood clots in lungs, hopes to return next season”