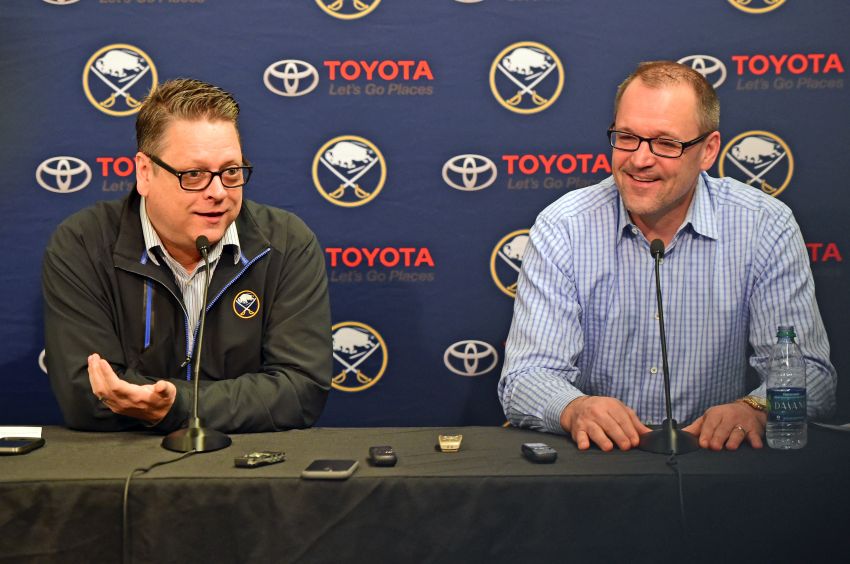 “So that will be our statement to the players, that yes, the goal is to reach the playoffs, and that we actually do expect that we can do that,” Murray said Monday during an end-of-season news conference with coach Dan Bylsma inside the First Niagara Center.

The season of growth after consecutive 30th-place finishes clearly pleased Murray and Bylsma. They spoke optimistically about the future and joked about their relationship during their 40-minute chat with the media.

Clearly, they believe the Sabres are heading in the right direction.

“I think we’re in good shape, a huge improvement this year,” Murray said.

For the first time in years, the Sabres could enjoy a quiet summer. While their roster still needs some work, most of it appears to be set. Bylsma and his staff, a group Murray frequently speaks to and said is “great,” have settled in almost a year after arriving.

The Sabres possess a strong stable of young talent, most notably rookie center Jack Eichel, a potential franchise player. Still, they have some glaring needs to address if they want to make the postseason for the first time since 2010-11.

Lehner recently underwent ankle surgery and will likely resume training in two weeks. Even at what Murray called “80 percent” following his return in mid-January, Lehner impressed him.

“Twenty-one games is not enough, but in that period of time he showed me that he has the potential to be what we need, and that’s be our hardest-working player and make the saves that he’s supposed to make,” Murray said.

Still, Murray wants to re-sign Johnson, an unrestricted free agent in July. Johnson, who compiled better numbers than Lehner, has said he would be interested in returning, although he clearly wants to pursue a starting opportunity if one is available.

“I think both (sides) said, money being equal, that he would like to come back also,” Murray said. “I … can’t speak for other teams, but it only takes one desperate hockey club that believes that he’s a starting goalie based on what he did this past season and then the money is not equal.”

Murray’s other need? He joked he’d like a defenseman capable of quarterbacking the power play to drop from heaven.

“I don’t know if I can do that, but that would help us a lot,” he said. “If I can’t do that, this goes to Dan, we have some really top-end forwards, I believe. I think they’re capable of playing in that position (on the power play).”

The Sabres have other needs, most notably a scoring winger to play on the top two lines. Murray, as he’s illustrated in barely two years as GM, isn’t afraid to make aggressive moves.

“I think we have cap space,” he said. “I do have some GMs that will talk to me and make a trade with me, so that’s a positive. We’ll be involved in free agency. (I don’t) know how much right now. There are going to be good free agents, no question. Is it extremely deep? Probably not. But it doesn’t have to be extremely deep for us. We’ve got some good prospects coming.”

Murray said he’s comfortable with those young players filling in.

“We don’t have to go out and sign a star and three role players because we’re short,” he said. “We’re not short. I think we’re in good shape. I think our young guys are all going to take a step ahead next year.