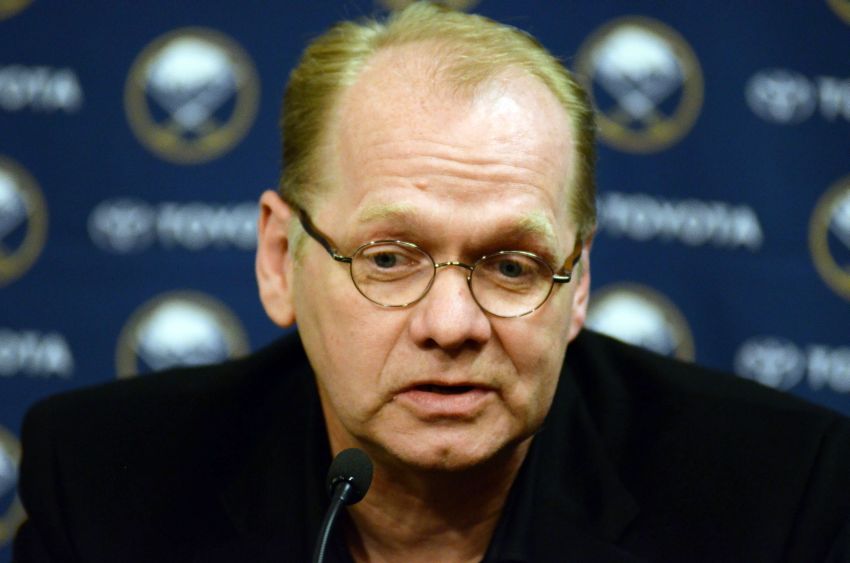 NEWARK, N.J. – By tonight, following what promises to be a busy, even chaotic day at the NHL Entry Draft inside the Prudential Center, the Buffalo Sabres could be radically reshaped for the future.

With four of the first 52 picks in a deep draft, including the eighth and 16th selections, the Sabres should nab some elite prospects. But general manager Darcy Regier’s rebuild goes beyond simply adding draft picks.

Starting goalie Ryan Miller and ace scorer Thomas Vanek, two franchise cornerstones with one year left on their contracts, are dangling. So, almost certainly, is the enigmatic Drew Stafford.

Regier has said Miller and Vanek could be dealt. Both have also acknowledged their time could be up.

This is all new, you know. Two full seasons into Terry Pegula’s ownership, the Sabres were supposed to have won a Stanley Cup.

At this time in 2011, Regier was the one wheeling and dealing for proven talent. The Sabres had become the talk of the league, convincing Robyn Regehr to waive his no-trade clause and trading for Christian Ehrhoff’s rights before signing him to a mega 10-year contract.

It didn’t work, though. The Sabres, a team that had prided itself on growing its own talent, have missed the playoffs the last two seasons. So they granted themselves a mulligan in April and began starting over.

Of course, the Cup goal is still discussed. But, as Regier said following the season, “suffering” could accompany that dream.

So here they are they, having accumulated 10 picks and looking to sell off more assets.

Today should kick off a franchise-altering summer.

“I’m excited because it adds to a group of young players we currently have – (Johan) Larsson, (Zemgus) Girgensons, (Mikhail) Grigorenko, Mark Pysyk and others, even the slightly older group in (Marcus) Foligno and (Tyler) Myers and (Tyler) Ennis and (Cody) Hodgson,” Regier recently said about the draft and the challenge before him. “So when you look at the bigger picture, and then you include two good second-rounds picks in what is a good draft, it provides a real good solid opportunity for us to project down the road in a year or two and look at a group of very good young players.”

Kevin Devine, the team’s director of amateur scouting, believes the draft’s so good the Sabres’ second-round picks might’ve been firsts in other years

“It would be close,” Devine said. “That’s how deep the draft is.”

Devine thinks the Sabres will try to get five or six forwards, three or four defensemen and one goalie. The Sabres forward and defense depth was whittled away considerably last season.

If the Sabres traded down early, it would probably be the 16th pick they received from Minnesota for former captain Jason Pominville, Devine said.

The Sabres haven’t had 10 picks since the draft went from nine to seven rounds in 2005. They have two first-rounders for the second straight year and the third time since 2008. Grigorenko fell to them at No. 12 last year before they dished the 21st and 42nd picks to Calgary and grabbed Girgensons 14th overall.

Last week, Regier basically doused any hopes the Sabres could move up and pry away one of the first three picks, calling it “impossible.” He noted, however, they’d explore all their options. It’s expected Colorado will select slick center Nathan MacKinnon No. 1 and defenseman Seth Jones and winger Jonathan Drouin will follow.

The Sabres haven’t picked so high since selecting Vanek fifth overall in 2003.

Vanek, while never the 50-goal scorer many envisioned, has developed into a leader and one of the NHL’s better wingers. He’s captain material and someone the Sabres might want to build around.

Pegula and Regier have both said they’d like the Austrian and Miller, the 2010 Vezina Trophy winner, to return. But Regier understands the players have a say.

“They’re exploring their options as well,” Regier said. “Part of that’s predicated on what we do.”

The Sabres reportedly haven’t approached either about a contract extension.

As the Sabres traded Pominville, Regehr and Jordan Leopold in April, Vanek said he “would probably look in the other direction” if the Sabres had a two- or three-year rebuild, comments he reiterated following the season.

Miller, meanwhile, sounded like he wants to return but knows the Sabres will trade him.

Even if neither gets traded today, Regier expects lots of business to get done throughout the league.

Regier added: “When it starts to flow or breaks, it’ll go, and you just have to be ready to make decisions from that point.”