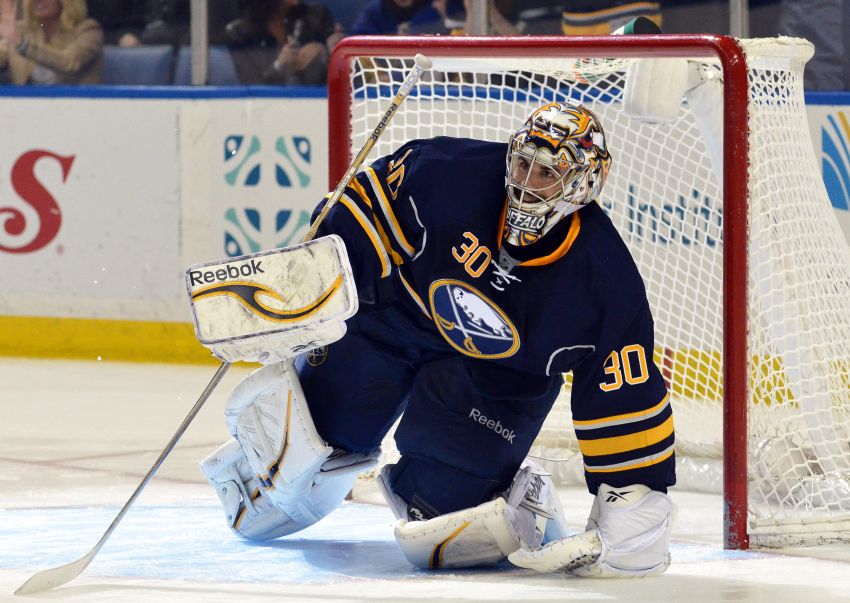 BUFFALO – With his future as the Sabres’ franchise goalie iffy, Ryan Miller said he’s trying to find a balance. The veteran doesn’t want to jump to any conclusions as rumors swirl he’ll be traded from the struggling club this offseason.

“I’m just trying to be open to the opportunity,” Miller said Saturday as the Sabres cleaned out their lockers inside the First Niagara Center after missing the playoffs a second straight season. “If it’s to be in Buffalo, I’ve been a Sabre my whole career. That’s where I like to be. That’s great.

At some point soon, Miller, who has one year left on his contract like leading scorer Thomas Vanek, will talk to general manager Darcy Regier about his future. Vanek also plans to have a meeting.

Some high-profile veterans, including former captain Jason Pominville, have already been dealt. Former coach Lindy Ruff was fired in February.

The Sabres recently turned to youth. In just a short time, the Sabres morphed into a dramatically different team.

“It was a strange year,” Sabres defenseman Tyler Myers said. “I had never been a part of anything that drastic before. It’s new territory for me.”

Still, it’s unclear whether the Sabres will rebuild fully or simply retool a bit.

Sabres defenseman Christian Ehrhoff added: “I’m hoping it’s not going to be a long rebuild like we’ve seen in Edmonton, for instance.”

The Oilers’ futility has earned them the first overall pick the last three seasons.

Vanek, who believes the Sabres look like they’re rebuilding, said, “If it looks like it’s a long rebuild, then it probably makes sense for both parties to move on.” The 29-year-old made similar comments earlier this month.

Having missed the playoffs four of the last six seasons, the Sabres haven’t possessed that combination often.

Defenseman Mike Weber said the Sabres “have a lot of changes to make.”

“We need to just go in a different here, really change the culture here,” Weber said.

What does he mean?

“It speaks to how we need to treat each other in the room,” Weber said. “I think a lot of that’s been lost here over the last couple years. Everyone wants to win.

Weber said everyone, including himself, needs to showcase more consistency.

“Everyone needs to be held accountable for when they’re not playing well, and we’ve got to find a way as a team to boost each other up and to power through some struggles,” he said. “That’s been our biggest downfall. We get lost in these ruts.”

“It just sucks us in,” he said. “We don’t have enough fight to fight out of it. I think that’s the culture that I’m speaking of. We need to find that battle, that intensity to get ourselves out of it.”

Miller isn’t totally convinced he’ll be out of Buffalo. He cited Vancouver goalie Roberto Luongo, who stayed with the Canucks despite assuming a No. 2 role, as an example.