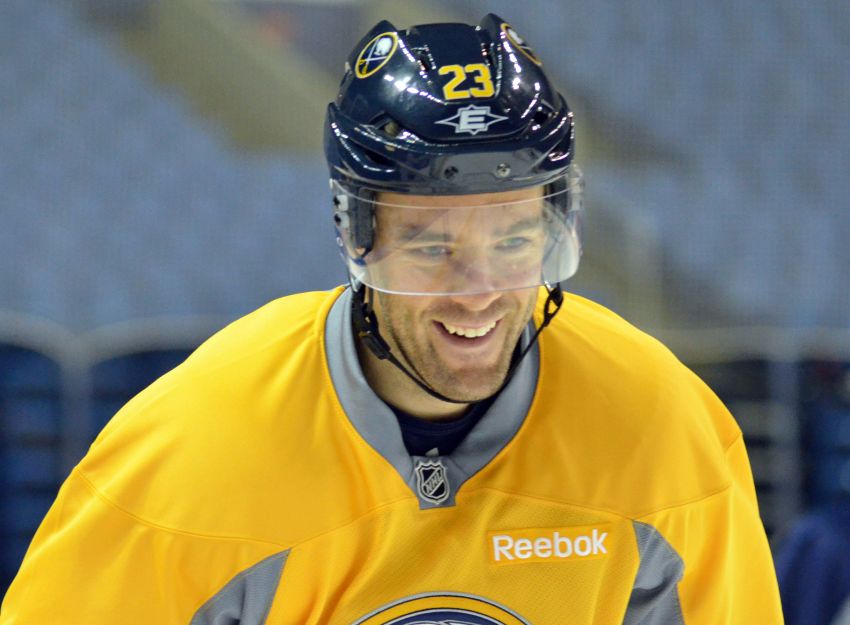 BUFFALO – Forget about Ville Leino’s shaky past with the Sabres and the widespread belief he’s a bust. Start judging the Finn differently.

The winger feels poised for a breakout season under new coach Ron Rolston.

Why should someone with only 10 goals and 31 points two seasons into a six-year, $27 million contract be given a clean slate?

Leino’s finally healthy after years of discomfort, having undergone a second hip surgery during the offseason. He’s playing in the top six again, this time at right wing, his favorite position, not center. He’s even back on the power play.

“He’s got that opportunity now,” Rolston said Monday inside the First Niagara Center. “He feels good. His health is good. He’s looking forward to a good start. So I think he’s excited about that.”

But Leino, who will turn 30 on Sunday, knows this could be his final opportunity here. The Sabres can still use a compliance buyout on him following the season.

Right now, however, Leino’s one of the Sabres’ top offensive threats heading into Wednesday’s season opener in Detroit, skating on the second line beside center Tyler Ennis and Steve Ott.

“He definitely has a ton of potential,” Ennis said about Leino. “Yeah, I think he’s due for a breakout.”

Injuries limited Leino to only eight games last season, all of them after Rolston took over. Leino’s hip shelved him the first 27 contests. A lung injury cost him the final month.

Still, he showcased glimpses of his old slick self in between, scoring two goals and six points.

“I felt like I got back to (how) I’ve always played hockey,” Leino said. “Even though it was just eight games it felt good for me. I got a lot of faith in getting back to that.”

Now, Leino said, “I know I can play wing.” He can operate down low and in the corners without worrying about having to get back first on defense, a responsibility he had as a center.

“It’s a huge relief to know that you’re going to be a winger,” Leino said. “You’re in your comfort zone a little more.”

Thanks to the surgery, he’s even more comfortable. Leino, who had his left hip repaired in 2010, needed the right side fixed badly.

“It’s been a few years since I felt this good,” Leino said. “It will only get better as the scar tissue breaks in.”

By now, Leino’s story is well known. Despite only one full, productive NHL campaign – 19 goals and 53 points with Philadelphia in 2010-11 – the Sabres massively overpaid Leino in free agency to play center, a position he hadn’t played since coming to North America in 2008.

Not surprisingly, Leino, a supreme puck carrier, struggled in the middle and with Ruff’s system.

Leino lost ice time and confidence while compiling only eight goals and 25 points in 71 games in 2011-12.

“Sometimes with Lindy I played 10 minutes, 11 minutes,” Leino said. “It’s really hard for a player like me to feel comfortable out there if you play 10 minutes. If you don’t touch the puck, if you don’t play power play, obviously that’s going to affect a lot.”

Does Leino feel like he has a clean slate with Rolston?

“I don’t think anybody has a clean slate overall,” he said. “But it’s definitely cleaner than with Lindy.”

Off the ice, Leino, who left a looser (and more successful) dressing room with the Flyers, once said he found the Sabres “way too serious” during their struggles.

The room has changed significantly, however. The many youngsters – the Sabres have three teenagers on the roster – have given the room a new feel.

“It is a pretty upbeat group, a lot of energy and everybody sees a lot of new faces,” Leino said. “So it’s refreshing, for sure.”

He added: “It’s looser, definitely a lot looser. It’s a lot closer to what we had in Philly to what we had the last two years. So it’s a pretty good atmosphere right now.”