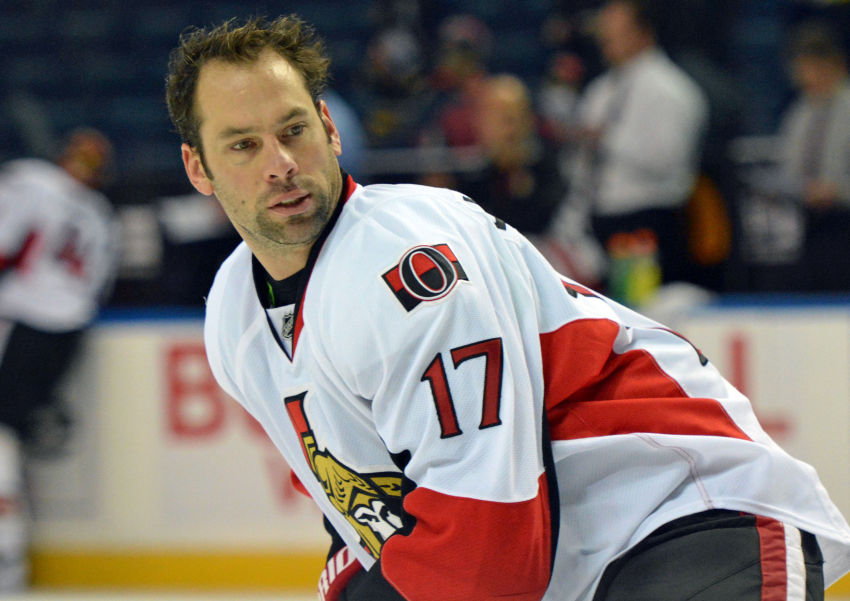 How old is Legwand? He played against Sabres coach Dan Bylsma, who turned 45 on Saturday and retired in 2004.

“He’s old enough that did happen,” Bylsma said inside the First Niagara Center.

The Nashville Predators drafted Legwand here second overall on June 27, 1998, one pick after Vincent Lecavlier, at what was then known as Marine Midland Arena. He made his NHL debut on April 17, 1999, two months before the Sabres played in the Stanley Cup final. No other current teammate played in the NHL until captain Brian Gionta, 36, debuted in 2001.

“It’s like it comes full circle to get the chance to play where you were drafted,” Legwand said.

These days, Legwand, fresh off a career-worst nine-goal, 27-point season with the Ottawa Senators, is graying, entering perhaps the twilight of what has been a solid 1,057-game career. The Sabres possibly absorbed his $3 million salary on June 26 so they could acquire Robin Lehner, their new No. 1 goalie.

Still, the 6-foot-2, 205-pound Legwand should enjoy a regular role with the Sabres, possibly as their third- or fourth-line center. He spent the first two days of training camp between Nick Deslauriers and Marcus Foligno.

“Now he’s definitely into the veteran category of his career,” Bylsma said about Legwand. “But he’s always been … kind of a straight-line skating guy, up and down. There’s not a lot of flash and there’s not a ton of – I know he’s going to read this and comment on it tomorrow – playmaking. He’s a fast skater, an aggressive skater, a smart hockey player, and that’s the way he’s got to play.

“He’s got to bring that game no matter how old his legs might be. That’s the kind of player he is and has been his whole career.”

Legwand added: “I think I can still contribute and play key roles and do whatever the coaches ask of me.”

The American earned a two-year, $6 million contract from Ottawa in 2014 after a strong 14-goal, 51-point, season with Nashville and the Detroit Red Wings. But his role diminished last season after the Senators fired coach Paul MacLean.

On a team filled with young, raw talent, Legwand’s experience should help. With Eichel, Legwand and Sam Reinhart, the Sabres have three former No. 2 picks. Legwand recently told the teenage centers that by December they’ll be wondering, “Is this thing over yet?”

Legwand’s one of hockey’s last throwbacks to a different era. When he entered the league, the game was just beginning the dreadful Dead Puck Era, a stretch of seven or eight years in which clutching, holding and hooking sapped skill and goals from the game.

While goal scoring is still low, Eichel and Reinhart are beginning their careers in faster, tougher game.

“Sometimes it’s going to take them a little while,” Legwand said. “They’re going to make mistakes. … It’s a quick game. You don’t have next week to wait for a game. You have the next day. … I think these kids are coming up now. The foundation’s there for them to be great hockey players in this league for a long time.”