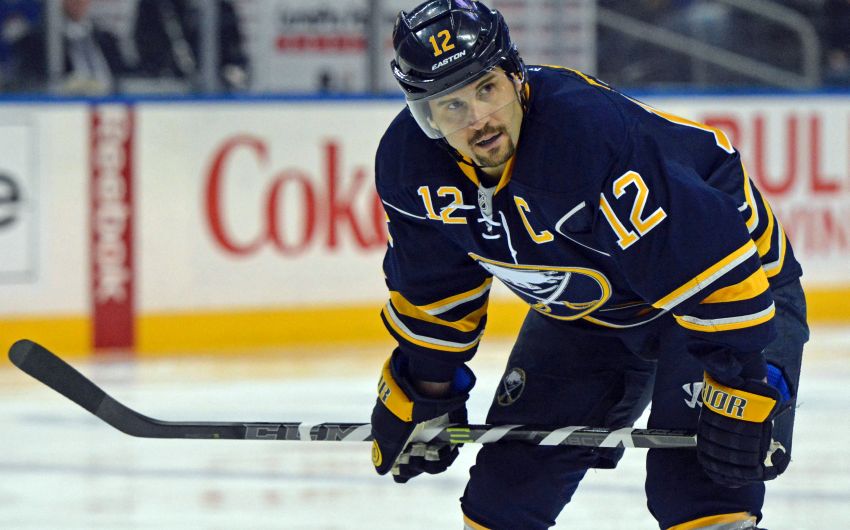 BUFFALO – Sabres captain Brian Gionta has finally started scoring again. With two more assists Wednesday, the winger has four goals and 11 points in the last nine contests, his hottest stretch in more than a year.

Gionta, after months of offensive struggles, looks like the slick veteran who has averaged 26 goals in his full NHL seasons. The production has helped buoy the Sabres’ late-season goal surge and a two-game winning streak entering tonight’s tilt against the Chicago Blackhawks inside the First Niagara Center.

But these days, Gionta’s offense is a bonus. The Sabres signed the respected 36-year-old, a 2003 Stanley Cup winner, to help shepherd the young team through an uncertain rebuilding process.

“His leadership alone has helped us get to where we are with the steps we’re making with the younger guys,” Sabres winger Patrick Kaleta said Thursday. “Numbers are numbers. I don’t believe it shows if you’re a good hockey player or not. It’s the way you approach the game, the way you play the game, and Brian does everything the right way.”

Through all the losing, through all the uncertainty this season, the Sabres have mostly stayed in a good place. Players are upbeat and still appear to enjoy coming to the rink every day.

“I try to stay as positive as I can,” Gionta said. “You come in and you do the same thing day in and day out and hopefully it rubs off on other people.”

“I think there’s always just that trust factor from the guys in the locker room to know that Gio’s going to be leading the charge, day in and day out, the way he prepares, the way he takes care of himself, the way he approaches the game,” Ellis said.

The Sabres’ awful record hasn’t changed Gionta’s approach, which is “the integrity of the game,” Sabres coach Ted Nolan said.

“Whether you’re a team going in the playoffs or going for the Stanley Cup, which he was a part of, his approach hasn’t changed,” Nolan said. “I think that’s how you have longevity in this game, that’s how you win championships, with people like that. Brian’s a shining example to our young guys what it takes.

Players gravitated to Gionta, Montreal’s captain for four seasons, immediately. Nolan awarded him the prestigious ‘C’ before the season opener.

“It was an easy room to come into,” Gionta said. “They’re very accepting, and guys were great with the transition with the new guys that came in, myself included.”

The Sabres felt Gionta’s absence after he suffered an upper-body injury Dec. 21, losing 12 out of 13 games without him. Nolan noticed players felt more comfortable when he returned to practice weeks later, comparing his presence to that of a parent.

“He’s got that great balance between the openness and the accountability factor,” Ellis said. “Guys can come in with anything. He can settle the room down or he can take control of a room. It’s that comfort level. It starts to rub off on guys.

“I think that’s a sign of a great leader, he’s able to do what’s needed, whether it’s a pat on the back or hold someone accountable, Gio goes about it the right way. There’s some guys that have different leadership styles, and the way Gio does it, he does it the right way.”

Ellis and Kaleta have played a combined 694 NHL games in the last nine seasons. They understand the game well. But both veterans try to pick up whatever they can from Gionta.

“It’s been a learning experience and a real pleasure to watch a guy like Gio and what he does on a day-to-day basis,” Ellis said. “It never hurts also that he’s a winner, and guys know that he’s a champion.”

Kaleta added: “If I can be a sponge and learn one thing from Brian, I’m going to be a better person, better hockey player.”