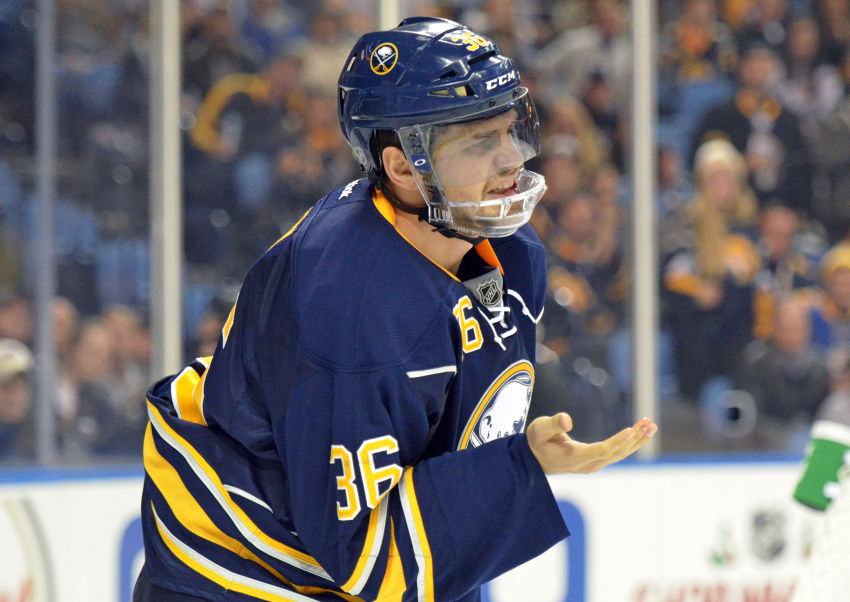 Patrick Kaleta has some enemies around the league. ©2015, Dan Hickling, Olean Times Herald

BUFFALO – Dan Bylsma’s memories of winger Patrick Kaleta pestering his old Pittsburgh Penguins teams are too fresh. To the Sabres coach, the veteran agitator is still the enemy. Having him on his side is going to take some getting used to.

“I have a hard time not wanting to kill him,” Bylsma joked this afternoon inside the First Niagara Center. “But I’ve told him that. I let him know I’m trying to like you, I’m trying to put it behind me. … He still does inspire that in me when I see him.”

Bylsma felt that Friday when Kaleta was “finishing checks and going hard through guys.” He also feels it when the Angola native flashes his sly grin.

Through two days of camp, Kaleta, who’s on a tryout with an AHL contract, has “stood out in how he practiced,” Bylsma said. The Sabres don’t have many open spots up front. But Kaleta, an NHL regular most of the past seven seasons, has a “legitimate chance” to make the big club.

“When you go into a season and look at contracts and you try to put people with those contracts into situations, we don’t have a lot of opportunity,” Bylsma said. “But I think as a veteran and as a guy in Pat’s shoes you have to come out and do exactly what he’s doing in camp, which is play his style, play his game.”

That game, of course, is hard-nosed and ultra-aggressive with some occasional flashes of skill.

Early in today’s scrimmage, Kaleta zoomed in down low, quickly extended his arms and earned a penalty by shoving prospect Brycen Martin to the ice. A day earlier, Kaleta scored a nifty penalty shot goal, assisted on Justin Kea’s goal and also drew a penalty.

“It’s not a real game out there, but in a sense it is, and a goal is a goal,” Kaleta said. “I’m happy to show that I’m able to contribute in that manner. Today I was able to show I can still hit.”

Camp practices have been brisk, something that favors Kaleta’s style.

“I think it’s guys wanting to show that they’re here and they’re willing to do whatever they can to make the team,” Kaleta said. “When you’re not a top-six player and you’re in the bottom six battling, part of your game is going to have to be physicality. Teams cannot play without being physical nowadays. … That’s just guys going out there and doing what they need to do to succeed.”