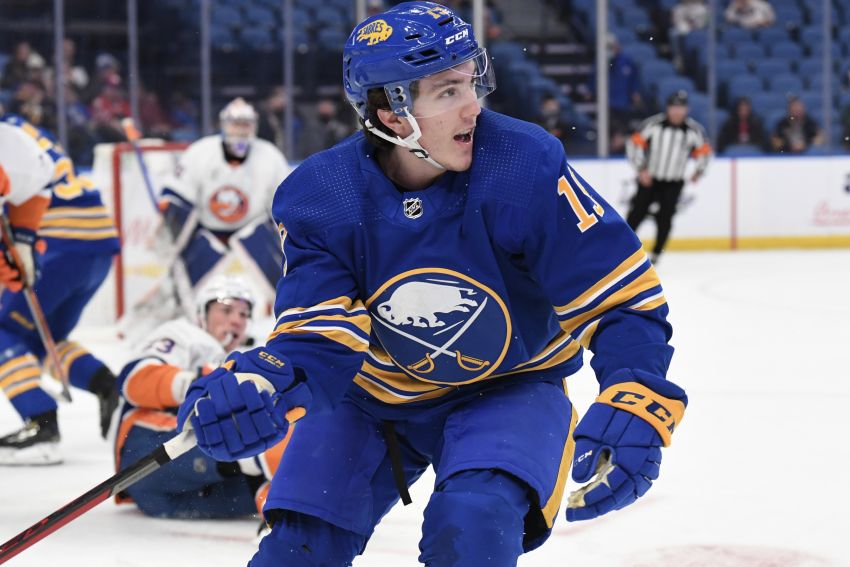 BUFFALO – In the waning minutes of Tuesday’s 6-3 win, Sabres winger Peyton Krebs grabbed the puck in the left circle and skated to the goal line before quickly finding linemate Victor Olofsson in the opposite circle.

Krebs caught the New York Islanders and perhaps even Olofsson, who was wide open, off guard. Olofsson converted the slick pass, putting the Sabres up 4-3.

“Saw him backdoor and just made a quick pass to him,” Krebs said following Wednesday’s practice inside KeyBank Center.

The adroit feed illustrated Krebs’ dynamic playmaking talents. Just 27 games into his NHL career, Krebs, 21, has consistently showcased elite vision and a supreme ability to think ahead of the play.

“Sometimes he knows you’re open before you know you’re open,” coach Don Granato said after the Sabres prepared for tonight’s home game against the Ottawa Senators. “That’s a special talent, he’s a talented, talented guy. … What a play he made. I don’t think anybody on the ice knew that Victor Olofsson was open, including Victor in that moment. …

“There was no coverage, no thought of coverage by New York to that area, that spot. And yet Peyton knew that that was a potential scoring opportunity.”

When Krebs’ no-look backhand pass created winger Alex Tuch’s first goal with the Sabres, Tuch, having previously played with the rookie, acknowledged he knew the puck could be coming to him.

But playing with Krebs can be an adjustment for some players.

“He sees things and surprises guys that you just have to be ready to receive the puck,” Granato said.

Sabres defenseman Casey Fitzgerald said: “When (Krebs) has the puck, you know he’s looking for someone so you just try to get open.”

Krebs, a natural center, has been skating at left wing because Granato wants him to play on one of the top two lines. Long term, Krebs probably projects to be a pivot. Right now, however, he’s fitting in well beside Olofsson and center Dylan Cozens.

The trio, which Granato put together for Sunday afternoon’s 5-3 win over the Montreal Canadiens, combined for two goals and seven points Tuesday. Krebs recorded two assists, upping his point total to eight in his first 14 outings with the Sabres.

“Vic and Cozey are unreal players,” said Krebs, who was acquired from the Vegas Golden Knights in the Jack Eichel trade. “You get them the puck, they’re gonna do great things. We just have to learn on how we can take that skill and use it as a unit and work together to get pucks back and little things like that. I think we played solid in Montreal there, just had to clean up a few little details that take us into that next step and allowed us to play well against New York.”

Krebs also played left wing for a bit with the Rochester Americans prior to his first recall.

“For Peyton, there was a little acclimation period for him shifting to the wing (in the NHL),” Granato said. “But for him, he figures out ways to contribute, so as soon as he started to figure out ways he could contribute on the wing, it was exciting for him.”

Krebs said: “In the NHL you kind of play everywhere in terms of moving on the ice. It’s the first man back, you’re gonna play center either way. I don’t know. It’s not much different for me. I kind of just try to do my thing out there.”

Granato wants his players to develop versatility in case they’re needed in another spot.

“They need to be comfortable at all positions,” Granato said. “We shift them around in practice so they’re more comfortable, because you get in these games and you lose guys to injury all the time, it’s consistent within the league. You can’t bank on normal, there is no normal, it’s adaptability. The best teams and the successful teams … adapt faster, better. That’s part of it, having guys play different positions.”