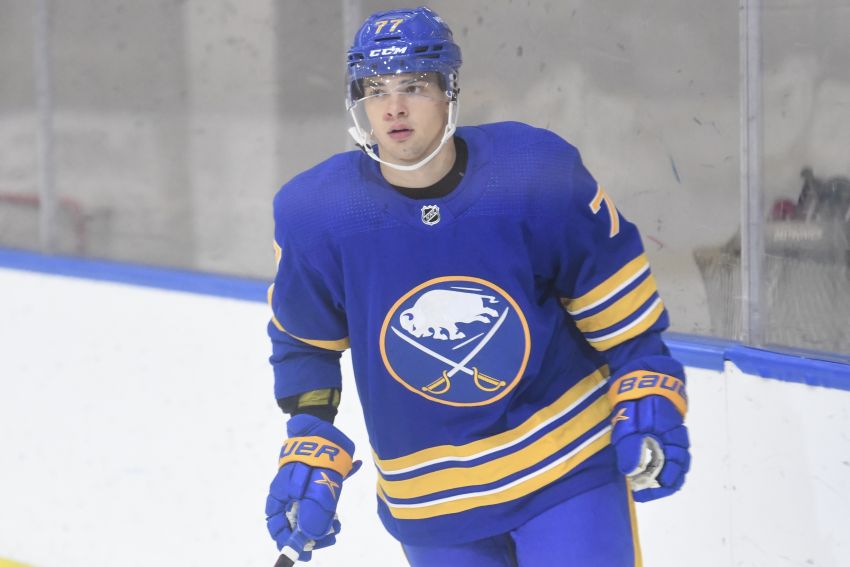 BUFFALO – Coach Don Granato said it’s only natural that Sabres rookie JJ Peterka might be pressing as he battles to earn a roster spot out of training camp.

So far, Peterka, 20, has had an underwhelming preseason, registering just one assist in three outings.

“I would love to score a little bit more right now,” Peterka said this morning inside KeyBank Center. “But for me, it’s just trying to find my game and getting the rhythm back.”

In the NHL, of course, the German winger can’t get by on skill alone. He learned the same lesson last season with the Rochester Americans. After a slow start, he ended up registering 35 goals and 80 points in 80 outings, playoffs included.

Peterka matured rapidly, focusing on details and playing a tighter game. That dynamic rookie campaign raised expectations he would crack the big club this year.

“We want to get him playing on instinct, but obviously before he can do that and get more rope, he has to learn, ‘OK, what areas am I really responsible for?’ said Granato, whose Sabres host the preseason game tonight against the Carolina Hurricanes. “I think he’s more aware of that, knowing he had to learn a lot of that in Rochester last year and stop and pay attention to details he never had to at previous levels.

The Sabres are putting Peterka in positions to succeed. The prospect skated at right wing this morning beside center Dylan Cozens and Peyton Krebs, a spot he will likely occupy tonight. He was also the net-front presence on the second power-play unit.

“Exciting,” Peterka said of his line. “I mean, I played with Krebsy a little bit in Rochester. I think we had pretty good chemistry there. I mean, with Cozy, great player, great playmaker. So, yeah, I think just excited for the game.”

Tonight’s game, the fifth of the Sabres’ six exhibition contests, will feature a lineup close to what they might dress on opening night.

Only one regular, winger Victor Olofsson, will be scratched.

Granato said goalie Craig Anderson will start and be backed up by Ukko-Pekka Luukkonen. Anderson appears to have the option to play as long as he wants tonight.

“It’s all about getting ready so however many minutes guys need, we’ll let him do that,” Granato said.

The rest of tonight’s line combinations and defense pairings are below.

Granato said Sabres center Sean Malone, who returned from a lower-body injury last week, is day to day. The West Seneca native has missed the last two days of practice.