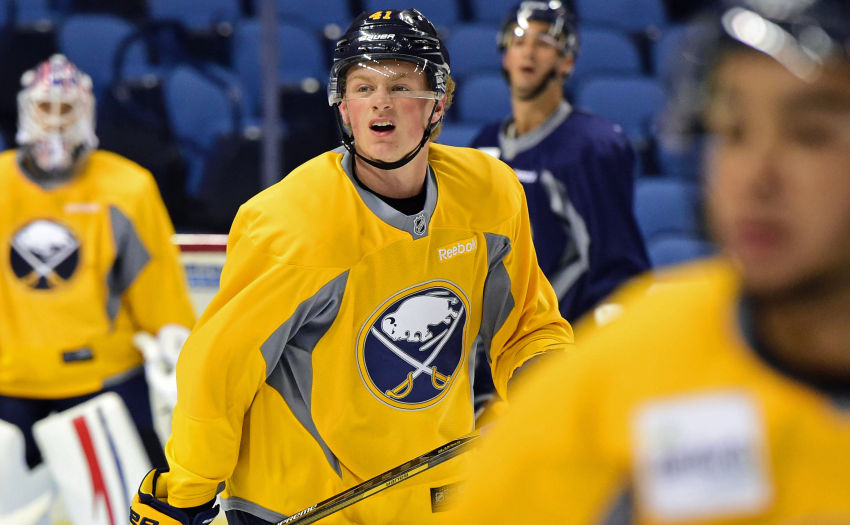 BUFFALO – Sometimes, Josh Chapman said, he can’t help himself. When one of the Sabres’ talented youngsters like Jack Eichel or Sam Reinhart is on the ice, it’s only natural to watch them for a moment.

“You get caught staring sometimes, for sure,” Chapman said Friday after rookie camp opened. “(Eichel’s) a really flashy, skilled player. Same with Reinhart and a bunch of other guys. They’re fun to watch. But you don’t want to watch them if you’re playing against them.”

Luckily, Chapman, a rough-and-tumble defenseman who earned a two-way AHL-ECHL contract thanks to an impressive development camp, will be on the same squad as Eichel and Reinhart for the rookie camp “Prospects Challenge” exhibition games the Sabres will host tonight and Monday inside the First Niagara Center.

Two months ago, Eichel’s Sabres “debut,” a development camp intrasquad scrimmage, drew 17,115 fans. While tonight’s crowd against the New Jersey Devils will likely be smaller, the game, Eichel’s first in a Sabres uniform, has much more significance.

“It seems a lot more like hockey season,” said Eichel, the second overall pick in June. “Everyone’s a lot more dialed in, I think. It’s a little different playing in September than playing in the beginning of July. I think everyone’s trying to prepare for the season and find a role somewhere.”

Eichel already has his role for the upcoming season. Barring injury, he’ll be in the Sabres’ opening-night lineup as their second or third center. But for every strong prospect in rookie camp, there are two or three Chapmans – players with a limited skill set scrapping to carve out a role in the organization.

Chapman’s father, agent and some friends plan to watch him tonight. Pulling an NHL jersey over his head will be a “really special moment,” he said.

The July 10 scrimmage quickly became a surreal experience for Chapman. Thanks to a grueling pre-draft process, Eichel looked drained during the scrimmage. Meanwhile, the undrafted Chapman, an invite to that camp, was enjoying the game of his life.

When Chapman fought Justin Kea, the crowd erupted. On Friday, he said he could still hear the cheers in his head.

“I’m a big energy guy, big energy player, and I feed off that,” Chapman said.

An excited Chapman left Buffalo feeling he had made a positive impression on the Sabres.

“I was confident if you put in the hard work, you’re going to get guaranteed results,” he said. “I’m a heart-and-soul player. I find I fit really well with Buffalo, and especially what Rochester is trying to build here.”

The Elmira Jackals, the Sabres’ ECHL affiliate, called Chapman later in the month. The Rochester Americans, their top affiliate, phoned a week later and offered a contract.

Chapman, who was going to a concert in Toronto, was speechless.

“I was really happy with that,” he said. “It’s been a really good summer.”

Notes: Eichel, who recently moved into Matt Moulson’s house, said the veteran gave him his own room, a bathroom and a set of “rules of the house and rules of living with” his family. Those rules,” Eichel said slyly, are “confidential.” … The Sabres also face the Boston Bruins on Monday. … Eichel, according to a roster sheet, will wear No. 41, the development camp number he was given. He will wear No. 15 during the season.