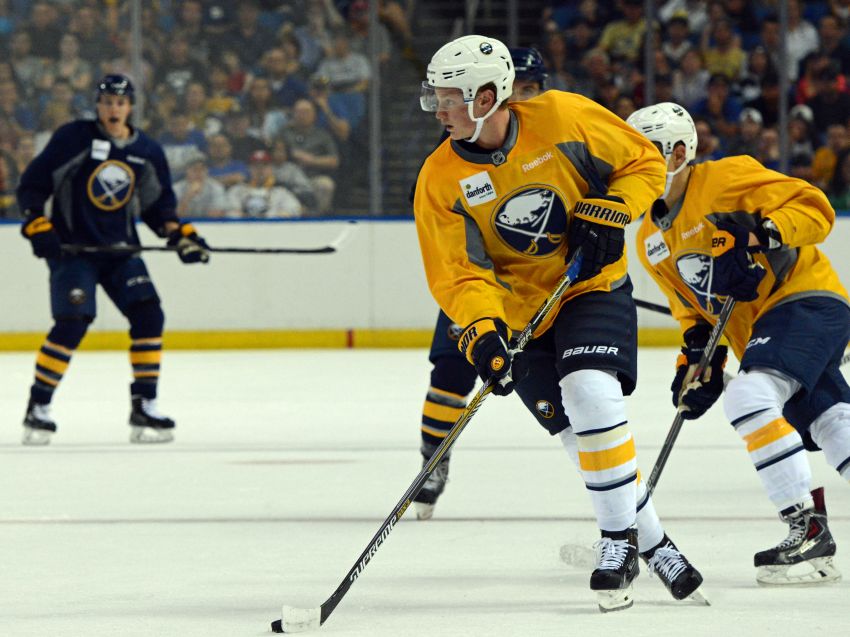 BUFFALO – The 17,115 Sabres fans who chose a hockey scrimmage – or, more appropriately, an opportunity to watch center Jack Eichel – over spending a beautiful Friday night in July outdoors probably don’t regret their decision.

For $10, they watched their newest star up close, saw center Sam Reinhart score twice and were treated to a five-on-five development camp exhibition with some unusual intensity.

“That was probably one of the most fun games of hockey I think I’ve ever played in my life,” said winger Justin Bailey, a Williamsville native who scored early. “You go out there for warm-ups and you get the little nervous jitters.”

The scrimmage, thanks to Eichel’s presence, had the buildup of a real game at the First Niagara Center. As the week went on and the ticket count swelled into record-setting numbers, it became apparent something special was happening.

“This only happens in Buffalo,” defenseman Jake McCabe said.

Eichel, who didn’t score in his Gold team’s 5-2 loss to the Reinhart’s Blue squad, said “it’s crazy to think there were 17,000 people here for a scrimmage in July.”

“It says a lot about Buffalo and how passionate they are about the Sabres,” the second overall pick last month said.

Reinhart, the second pick in 2014, added: “To see that, that’s something else. I don’t even know how to describe it.”

For Sabres fans hungry for a winner, Friday signaled the start of a new era.

“Pretty awesome,” Sabres coach Dan Bylsma said. “There’s been a lot of hype about the number of people coming. It started even this afternoon, this place was jammed around the rink. Even coming to the game with the weather, it had a feel of excitement of a playoff game almost with the people that were here.”

Eichel created some excitement just by stepping on the ice. The 18-year-old showcased some glimpses of his slick self. At one point early, he got around Joe Gatenby in tight space along the left wall, zoomed to the net and create a strong scoring chance. Eichel also got stuffed on a penalty shot after displaying his smooth hands and shot high on a shootout attempt following the game.

Clearly, the long week of camp and all of his recent commitments have drained Eichel.

“It’s been a long week and a lot going on,” Bylsma said. “That’s not as explosive as he can be. I was hoping to see a blast of explosion. He had a couple times in the first period where he did have that.”

Eichel added: “I feel like I’ve been bouncing around everywhere lately. I haven’t been able to settle into a groove of skating and training. I haven’t been on the ice as much as I wanted.”

These scrimmages usually bring out the best from some undrafted players, the youngsters looking to get noticed. Friday was no different.

“I didn’t like … there was a no call on the hit,” said Bylsma, who basically said he liked the fight by tapping the microphone and asking if it was on.

Even in July, prospects are fighting for their futures.

“It’s another game,” Eichel said. “Whatever you do, you want to show the Sabres staff, you want to make an impression.”