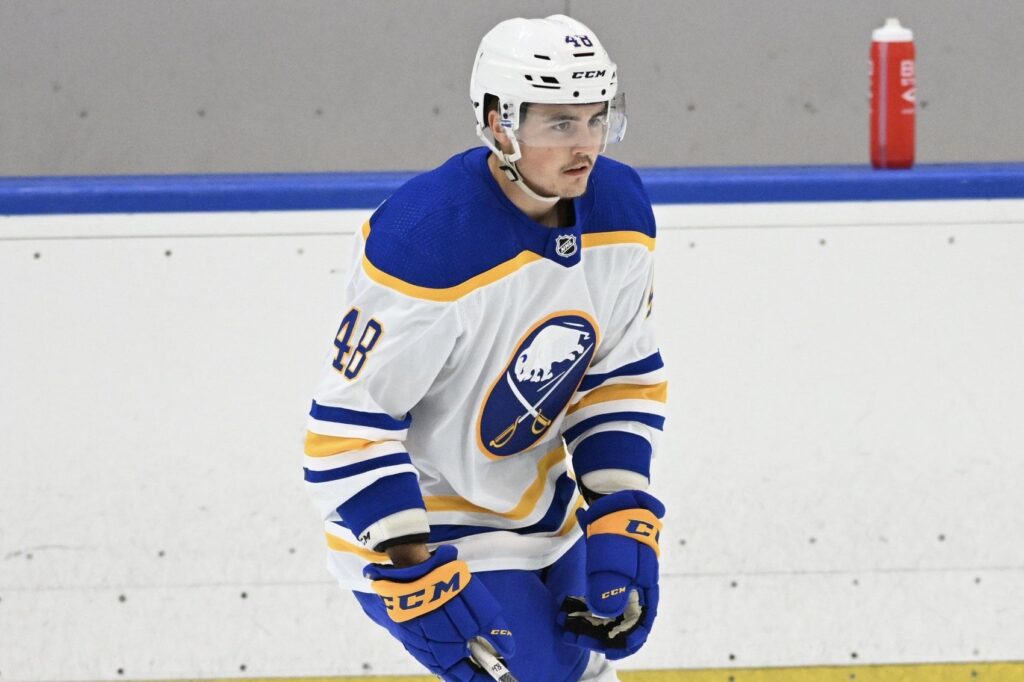 BUFFALO – As the Sabres killed a penalty early in the third period of Thursday’s Prospects Challenge opener, center Tyson Kozak grabbed the puck at the far blue line and zoomed down the left wing on a two-on-one.

When Kozak hit the circle, instead of passing to winger Linus Weissbach, he cut to slot before deftly backhanding the puck the into the net for the short-handed score.

The skill Kozak displayed in scoring his second goal of the night and the game-winner impressed coach Seth Appert. But so did the youngster’s aggressiveness.

Kozak, 19, opted for the grittier play, and he could’ve played a steep price.

“It’s a great goal and it looks so pretty and poised and all those things but at the end of the day, it’s also a fearless goal,” Appert said following the Sabres’ 4-3 win over the Montreal Canadiens at LECOM Harborcenter. “He plays in hard areas. … A lot of players, especially young players, are going to settle for the snap shot on the short side and they’re not going to take that puck to the back post, because this is big boy hockey and sometimes you take pucks to the back post and you get lit up.

“And I had no doubt that he was going to take that to the back post. Everything else was just posturing to try and fake people.”

The Sabres, who play the New Jersey Devils tonight, have a slew of intriguing forward prospects participating in the rookie tournament. Matthew Savoie, Isak Rosen and Aleksandr Kisakov are all high draft picks. Weissbach and winger Lukas Rousek made strong impressions as rookies with Appert’s Rochester Americans last season.

But Kozak, a seventh-round pick in 2021, 193rd overall, has grabbed the Sabres’ attention thanks to a style Appert said “has a lot of bite, a lot of substance.”

He added: “He just has a presence about him. He has a compete about him. His skill is transferable skill because it’s hard skill. It’s not just flash. There’s a lot of substance to his game that we’ve felt every time we’ve been with him. I think he’s a winning hockey player and I thought he showed that tonight.”

The Sabres signed the 5-foot-11, 172-pound Kozak, who enjoyed a breakout junior year with the Portland Winterhawks last season, to a three-year, entry-level deal last month.

“It was a surreal moment for me – me and my family,” said Kozak, who whose tip late in Thursday’s second period gave the Sabres their first lead. “Definitely exciting.”

Not many seventh-rounders, of course, earn contracts. Even fewer crack the NHL. Since 2005, only two the Sabres selected – winger Victor Olofsson and defenseman Brady Austin – have played for them.

Kozak’s exploits already have some observers wondering why he lasted so long in the NHL Draft. He said he began his Western Hockey League career in 2019-20 as “a defensive-minded centerman.”

“Just going into the WHL my first year, I wanted to be a reliable guy that they could put in all situations,” said Kozak, who was injured in his first Prospects Challenge appearance last year.

Then Kozak said he focused on developing the offensive side of his game, and in 2021-22, he reaped the rewards, setting career highs with 32 goals, 37 assists and 69 points in 66 games.

The Manitoba native traces the confidence he has been showcasing to last season.

“I had a pretty successful year in Portland,” he said, “and owe it all to my coaches and teammates back there, put me in good situations and helped me succeed.”

Sabres prospect Josh Bloom, who suffered an upper-body injury Thursday, is day to day, according to the team.

The Sabres believed earlier this week a lower-body injury would sideline the Czech the entire tournament.

Kulich, 18, skated with his teammates this morning.

“We take precautionary measures early,” Appert said. “He was a little sore from something he came into camp with and that was aggravated in some of the testing and things like that. But upon a second review and a more in-depth look from our medical team, it was deemed that there’s no issues at all.”