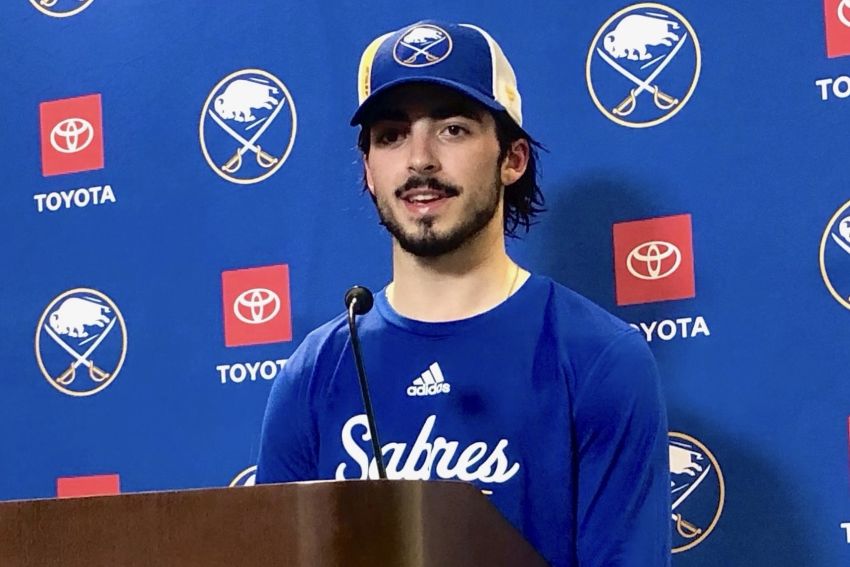 The coach settled on two.

Two months ago, a shoulder injury forced Savoie, the ninth overall pick on July 7, to stay off the ice during development camp. So Appert had to wait until rookie camp opened at LECOM Harborcenter to watch the ultra-talented center up close.

“His pace of play is so high with and without the puck,” Appert said after the Sabres prepared for tonight’s Prospects Challenge opener against the Montreal Canadiens. “A lot of times guys of his age and his caliber offensively might not have the work level, the hunt of the puck he does. I just was incredibly impressed with how competitive he is on the puck, how smart he is. You could see it in that first keep-away passing game. He sees things that other players don’t see.”

But that’s just one part of what makes Savoie a high-level prospect. Appert said the youngster also possesses maturity that belies his young age.

While Wednesday’s practice marked Savoie’s first with the Sabres, Appert did not sense any excitement from the rookie, which he said is “a good thing.” Savoie simply treated the session as an opportunity to prove himself.

“He has a real presence about him for a young man,” Appert said. “When you talk to him, when you give him instruction, anything, he doesn’t come across as an 18-year-old kid. (He) carries himself very mature, got a real good presence, is energized on the ice.

“But (he) didn’t seem like a kid in a candy store (Wednesday), like it’s Christmas morning. Felt like he’s ready to be here, ready for the moment and ready to go out and show what he is.”

On a different team, Savoie might show he’s worthy of a roster spot during training camp. But the Sabres stress development and patience. The odds of them rushing him to the NHL straight from junior at his age are slim.

Besides, they appear to be set up front. They likely know the 13 or so forwards they’ll keep for the regular season.

Still, the Sabres can keep Savoie for nine games before the first year of his entry-level contract kicks in. It’s a free trial of sorts. He knows he can make their decision difficult.

“That’s all really a player can do,” Savoie said. “Make the decision to send you home tough and make them not want to send you home. I want to play good enough to be able to stick around as long as I can.”

He added: “My biggest goal is to definitely play some NHL games this year. It’s not easy to crack the roster at the start of the season.”

Savoie arrived Monday in Buffalo after attending the beginning of training camp with the Winnipeg Ice, his Western Hockey League team.

On Wednesday, he centered Aleksandr Kisakov and Isak Rosen, two of the Sabres’ other top forward prospects. Winger Linus Weissbach also took reps on the line.

Appert said Kisakov, a second-round pick in 2021, is “a little bit of a magician with the puck.”

“His edge control is really special,” he said. “Savoie has that explosiveness in his skating, but Kisakov’s edge control and cutbacks and his ability to find secondary plays is really unique.”

“It’s maintenance, it’s day to day,” Appert said. “And at the end of the day, we’re keeping our eyes on bigger things, right? This is a prospects camp.”

Update: Appert said this morning that Kulich has a lower-body injury and will miss the Prospects Challenge.