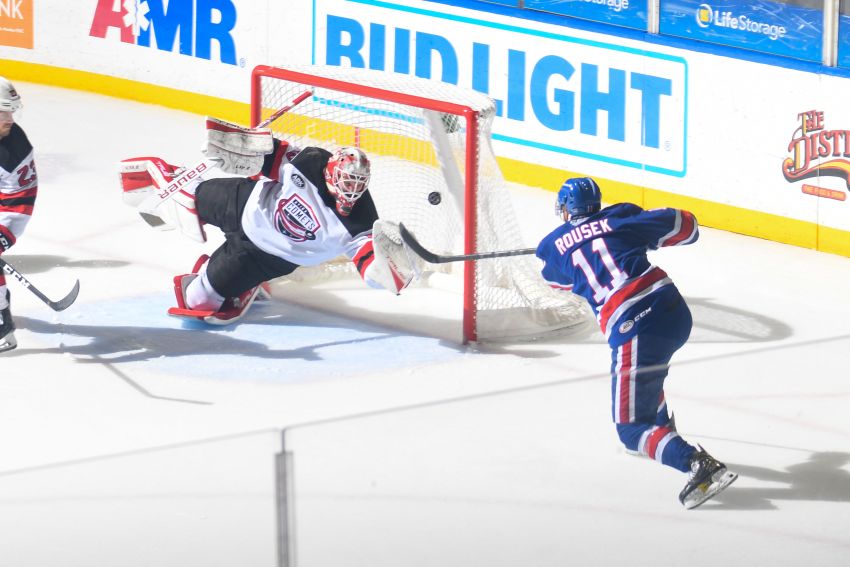 ROCHESTER – Considering the Americans boast one of the AHL’s deepest forward groups, it’s easy for rookie winger Lukas Rousek to be overshadowed.

Sean Malone and Michael Mersch each cracked the 20-goal mark. Brandon Biro, Mark Jankowski and Brett Murray all spent time with the Buffalo Sabres this season.

But Rousek, who underwent ACL surgery before the season, has started standing out even among those names, developing into a prospect to keep tabs on. Over the past three weeks, the Czech has quietly become a scoring threat.

His first-period goal in Sunday’s 4-3 overtime win against the Utica Comets – he connected on Peterka’s nifty backdoor pass – was his second of the playoffs and third in eight games dating back to April 23. He did not score his first goal until his 17th regular-season appearance.

“Guys love to play with him because he finds plays,” Amerks coach Seth Appert said Sunday following Game 3 of the North Division semifinal at Blue Cross Arena. “Quinner and Peterka giggle in practice at some of the stuff that Rousek can do, how he sees plays that most people don’t see. So nobody minds when I’m shuffling lines and I throw them with Lukas because he’s a very smart, creative player.”

Rousek, who played four seasons of pro hockey in the Czech Republic, endured a long rehab before making his AHL debut on March 18.

Appert said when Rousek reported to Rochester early in the season, he embraced his challenge.

“He showed up every day, he’s like the first guy here, doing his rehab, a smile on his face, saying hello to everybody, just happy as a lark,” Appert said. “That young man put a lot of work in and it’s been impressive how he’s handled this level of hockey being out that long.”

The Sabres drafted Rousek in the sixth round in 2019, 160th overall.