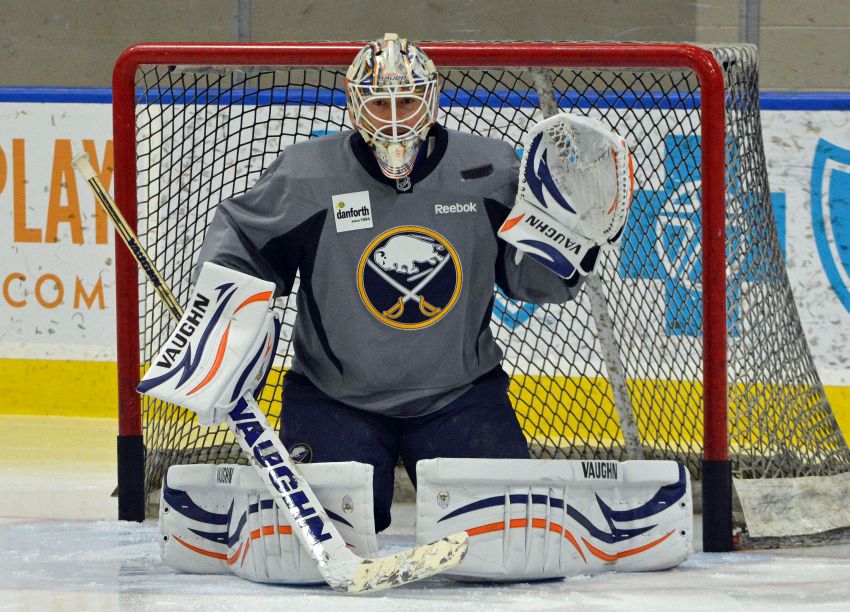 “Everyone wanted Lindback, Lindback,” Nolan said Thursday inside HarborCenter after the Sabres prepared for tonight’s road game against the Ottawa Senators.

Nolan refused to sit Neuvirth, starting him eight straight games before the Sabres traded him Monday.

“How can you justify, wake up in the morning and go to sleep at nighttime, knowing that you’re not playing a goaltender that’s playing well?” Nolan said. “You can’t do it.”

Nolan has played the hot hand all season, something he plans to keep doing for the final 18 games.

“If somebody shows something, they’re staying in,” Nolan said.

Lindback finally played Tuesday, making 32 stops in a 3-0 loss in Tampa Bay. But Sabres newcomer Chad Johnson, part of the Neuvirth deal with the New York Islanders, will make his first start tonight.

“Another one of these guys who’s going to get a great opportunity to show his skill and do it well,” Nolan said. “You never know how it works out down the road.”

Johnson added: “When you join a new team, there’s always new faces and some new systems you need to get used to. So there’s always butterflies going the first game.”

Clearly, Johnson has the upper hand in the goalie battle. The 28-year-old, one of the NHL’s best backups last season in Boston, has a year left on his contract. Lindback will be a free agent.

The Sabres desperately need a goalie for next season. Johnson has a terrific opportunity to impress the team’s brass.

“It’s a good opportunity for me to come in and play a lot of games,” Johnson said. “It’s all you can really do.”

The Sabres are Johnson’s fifth team since 2009-10. He also played for the New York Rangers and Arizona Coyotes before joining Boston, where he developed into a strong No. 2 behind Tuukka Rask with the Bruins, going 17-4-3 with a 2.10 goals-against average, a .925 save percentage and two shutouts in 27 games.

That earned the Calgary native a two-year, $2.6 million contract from the Isles on July 1.

But Johnson struggled playing behind former Sabres goalie Jaroslav Halak on Long Island. His numbers this season – 8-8-1, 3.08 and .889 in 19 appearances – are among the league’s worst.

Johnson has allowed five goals five times this season, including his last nod, a 5-3 loss to the Carolina Hurricanes on Saturday.

Still, Johnson believes he played well at times with the Isles.

“I let in like 18 goals in four games,” he said. “That’s going to hurt your statistics. Obviously, in the overall picture, your statistics, they don’t look great right now. But I had a lot of good games. The last five or six I was playing good hockey.

“In this league, you got to play well all the time, and if you don’t, organizations will lose faith in you and they look elsewhere. I’m confident in my game. I’ve obviously had success in the past and even this year, too.”

Of course, if Johnson had difficulties backstopping the first-place Isles, what could happen in front of the Sabres’ porous, league-worst defense? Opponents have pumped 35.3 shots a game on the Sabres this season. The Isles have allowed only 28.2 shots a game.

“You always have games when you’re going to get a lot of shots,” Johnson said. “In Long Island the last game, like after two periods, I had 36 shots. It wasn’t a great game there, so I guess for me it’s preparing the same as usual. You never know what to expect. Even in Boston, there was times I had 40-some shots a game or 30-something.”

Naturally, leaving one of the NHL’s best teams for its worst has “been pretty different, without a doubt,” he said.

“You go from a change of atmosphere, a team has success this year, and then to a team that’s obviously not,” he said. “So there’s definitely a bit of an atmosphere change. The guys are really good. (It’s a) nice group again.”

That change was discussed on TSN during Monday’s trade deadline coverage. As Johnson waited on hold, he could hear the panel discussing his season and the Sabres. When he got on the air, he was asked about his new team tanking.

“I’m sitting there on hold while they’re talking about my season in negativity with the organization and where I’m going and what they’re doing,” he said. “I think … they can say whatever they want, everyone can have their own opinion. That doesn’t bother me. It’s the idea of the setup, I guess, of it all, to me was a little bit on the unclassy side.”

One thought on “Sabres goalie Chad Johnson ready for debut, has chance to grab No. 1 job”