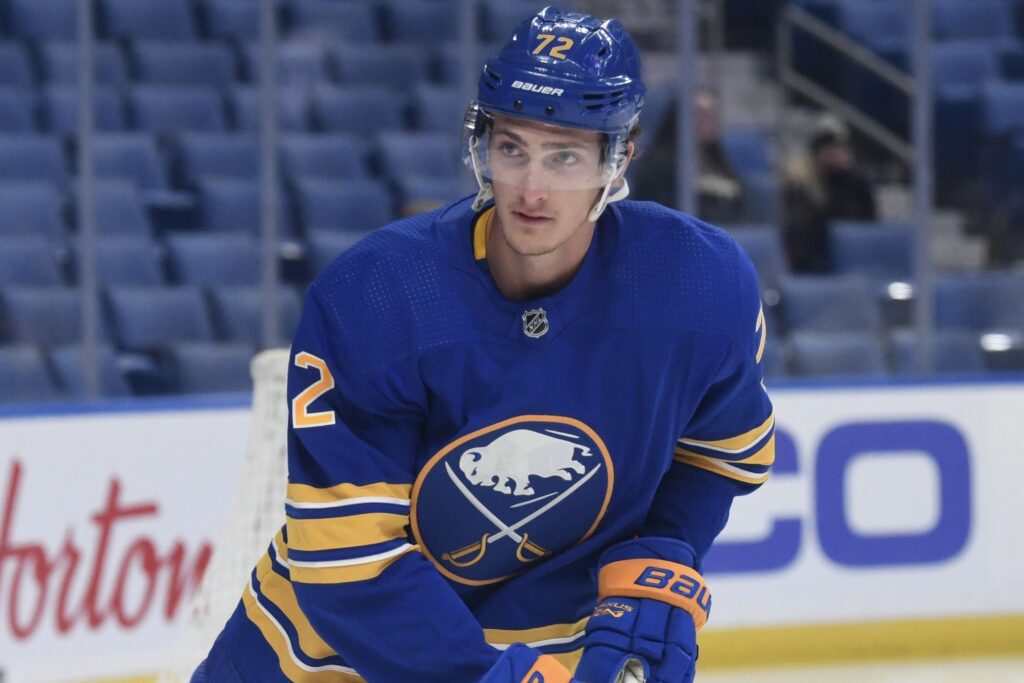 BUFFALO – Over his 145-game NHL career, Sabres forward Tage Thompson has only showcased glimpses of what coach Don Granato called his “incredible potential.”

“Which is different than actual potential,” Granato said prior to Monday’s 5-3 preseason loss to the Columbus Blue Jackets. “He can do things in moments but we need him to sustain more and to do it more consistently.”

Thompson, 23, has enjoyed little consistency over his three years here, often getting scratched and moving up and down the lineup. Still, at times, he has utilized his 6-foot-7, 218-pound frame and heavy shot so effectively he looks like a power forward capable of scoring 25 or 30 goals.

“I still use the word ‘potential’ with him,” Granato said inside KeyBank Center. “We can look at what he actually is right now, it’s nothing compared to what he could become and he needs to continue focusing on that. He’s done a good job of that but there’s a lot more for him.”

Having scored seven goals and 11 points over the final 21 games last season, Thompson began the offseason oozing with confidence. He parlayed his career-best stretch into an invitation to represent Team USA at the World Championship.

“That confidence carrying into the summer is a big piece,” Thompson said.

The genesis of Thompson’s productive stretch can be traced to Granato’s strong belief in him. Seven years ago, Granato coached Thompson at the U.S. National Team Development Program.

Shortly after Granato took over the Sabres, he moved Thompson, who had been sitting out games, up to a scoring line beside center Casey Mittelstadt and Rasmus Asplund.

“He gave us a ton of opportunity,” Thompson said. “Our line in particular, me, Mittsy and Aspy, we were given a lot of ice time and a lot of responsibility. I think we all appreciated that and we wanted to prove him right. I think for the most part we did. …

“A lot of that confidence, for sure, just comes from Donnie trusting.”

Granato trusts Thompson so much he used him at center Monday between rookie Linus Weissbach and Kyle Okposo.

The Sabres’ dearth of talent has forced Granato to get creative to fill the position. He moved Zemgus Girgensons, a winger for about the last five seasons, to center at the beginning of camp. Granato has also been using Arttu Ruotsalainen, a winger as a rookie last season, in the middle.

Thompson played center growing up before he was shifted to wing in college.

“We look at our centers and we’re very young and have new guys in there so we have to keep an open mind and potentially be as creative as we can be and see what may be the best situation for us,” Granato said.

During the summer, Granato called Thompson and told him he was thinking about trying him at center.

“I like all forward positions just about the same,” said Thompson, who scored a power-play goal in Friday’s 2-1 loss to the Pittsburgh Penguins. “It’s been a while since I played center, so as of right now, I’d probably say I’d prefer wing a little bit better, but I’m excited for the opportunity to get back in the middle.”

Granato said to forget about goalie Ukko-Pekka Luukkonen’s performance in the first 40 minutes of Monday’s loss. The Sabres consistently hung the prospect out to dry, offering him little help.

As a result, the Finn allowed five goals on 21 shots.

Luukkonen, however, rebounded in the third period, stopping all nine shots he faced.

“That’s the way you judge him,” Granato said. “Obviously, the score being what it was after two (5-1), you’re contemplating pulling him out. … (I) might have done differently if it was the regular season.”

Luukkonen said: “It was nice to play well in that (third period) and at least get the chance to show that I can do better than it was in the first two.”

The Sabres, as they have in each of their four exhibition games, started slowly.

“We weren’t assertive enough,” Granato said. “We were on our heels, we were hesitant. I don’t question our intent. We just were tight and hesitant.”

Monday’s lineup resembled one the Sabres could use during the regular season. At least 16 of the 20 players will likely be on the opening night roster.

Rookie winger J-J Peterka scored a nifty goal in the third period. Mittelstadt had the Sabres’ other goals.

Notes: The Sabres play a preseason road game tonight against the Pittsburgh Penguins. … The Sabres announced a crowd of 6,327 fans, although the in-house attendance appeared to be less than half of that. … Granato said defenseman Mattias Samuelsson (lower body) will begin skating again soon.