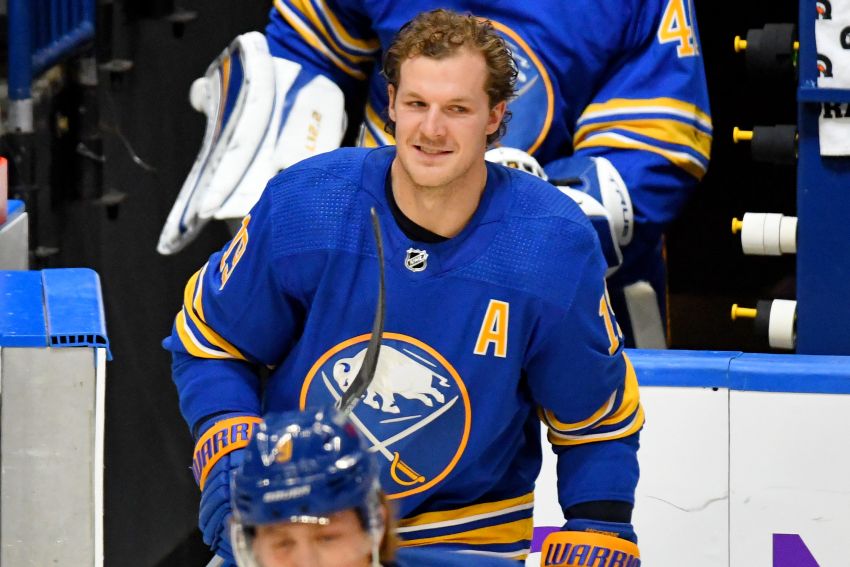 After Jake McCabe tore up his right knee Feb. 20, ending his season, the Sabres defenseman said he had some difficult conversations with his family that night.

Then McCabe, who had just returned after battling COVID-19, refused to feel sorry for himself. The American decided “being sad and mad” wouldn’t help him rehab from ACL, MCL and meniscus injuries.

“I’ve just had a really good attitude about it the whole time,” McCabe said on an end-of-season Zoom call Monday.

McCabe, who played only 13 games this season, plans to start skating again in July and said he will be ready for next year.

“Everything is going really great, so I really am just in a good spot overall mentally and physically,” he said. “At this point, I’m just excited for next season.”

Of course, it’s unclear if McCabe will be playing in Buffalo next season. The hard-nosed alternate captain can become an unrestricted free agent this summer.

Having debuted late in the 2013-14 season, McCabe owns the third-longest tenure on the Sabres, trailing only winger Zemgus Girgensons and defenseman Rasmus Ristolainen. McCabe has experienced constant losing and turmoil for seven years, so it wouldn’t be shocking if he wants a change of scenery.

Five days after McCabe was injured, the Sabres began their 18-game winless skid.

“You can’t really do anything and you’ve got all your buddies and teammates that you’ve been battling with for years and you can’t help them out,” he said of the embarrassing streak. “It just (stinks) overall.”

The Sabres have finished dead last four times during McCabe’s career, including this season. They’ve employed five coaches and three general managers over that wretched stretch.

McCabe did not play a game under interim coach Don Granato, who replaced Ralph Krueger on March 17. Granato, 53, appears to be a strong candidate for the permanent job based on general manager Kevyn Adams’ recent praise.

“He’s a really good communicator and I’ve really enjoyed my time with him so far,” he said. “He’s an easy guy to talk to. It hasn’t gone right so far in my time here. It’s very frustrating. However, I think Kevyn has a great vision for this team and moving forward they have decisions to make with the coaching staff and what not, but I think it’s going to be moving in the right direction here.”

McCabe feels good about the late-season success the Sabres enjoyed under Granato with a slew of rookies and other young players in the lineup.

One of those neophytes, defensemen Mattias Samuelsson, could graduate to regular NHL duty if McCabe leaves.

Despite his injury, McCabe would draw plenty of suitors if he hits the open market. He said he knows he will “come back stronger and better than ever.”

“We’re not a plant and pivot sport like basketball, football, soccer, so moving forward I’m not as concerned about it,” he said. “I don’t think teams should be.”

McCabe injured his knee when his leg buckled as he tried to hit New Jersey Devils captain Nico Hischier in the corner. The play looked pretty routine.

That’s why McCabe thinks the Sabres’ loaded schedule and getting sick contributed to his injury.

“I truly think that COVID played a role in my injury,” he said. “I mean, whether it was minor or not, when you look at the play, it’s something I’ve done thousands and thousands of times, ripping a guy off in the corner. I lost probably five to seven pounds during my COVID and I only skated twice and then I was back playing, so all it takes is just for those small percentage points. Two, three percent weaker and then all of a sudden something like this can happen.

“So that frankly (ticked) me off. COVID (stinks). (Stinks). It still (stinks), but it seems like we’re hopefully getting back to some more normalcy.”