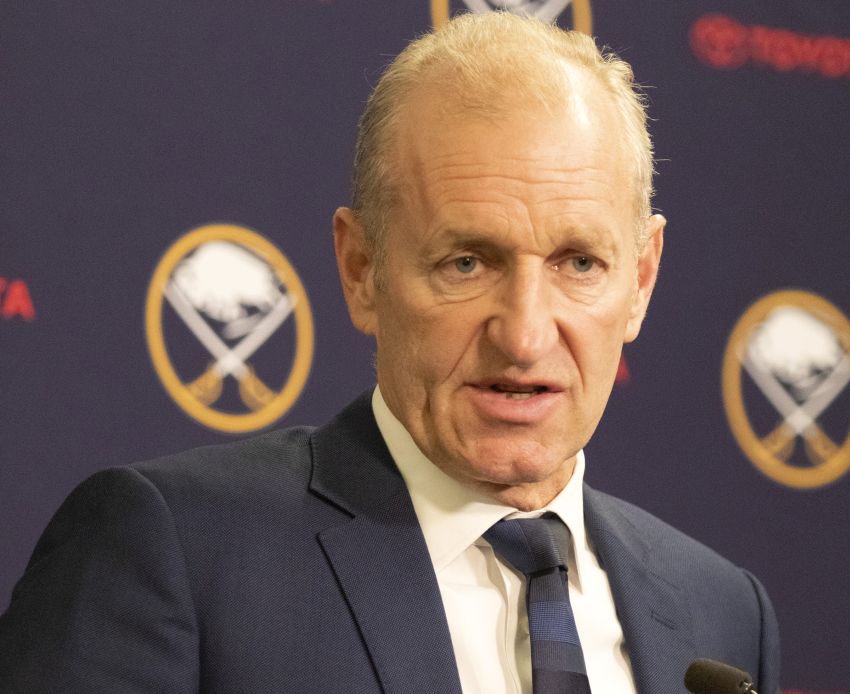 The Sabres have signed a few players with connections to Ralph Krueger. ©2020, Janet Schultz

Three of the five free agents the Sabres have signed this offseason – most notably, Taylor Hall, the 2017-18 Hart Trophy winner – have connections to Krueger.

Adams, of course, has a much smaller staff than his predecessor. Botterill also had two experienced assistant GMs – Steve Greeley and Randy Sexton – he utilized. Adams doesn’t have any assistants.

So naturally, Adams, 46, has leaned heavily on Krueger, a coach he inherited, and others. Adams needs advice and a sounding board. As a result, Krueger has quickly developed a bigger voice in the organization.

Krueger said Adams has a “very inclusive” style. That, of course, includes Sabres owners Terry and Kim Pegula. When they dismissed Botterill, Terry Pegula said they felt like they weren’t being heard.

“(Adams is) an excellent listener and also a strong leader when it comes to his processes to make decisions,” Krueger said on a Zoom call Monday. “For me, when I came to Buffalo, I came here to be part of a team of people and just like my coaching staff … I speak for the room and not just myself. Kevyn carries that same philosophy into the management team and we are all connected and integrated.

“The Pegulas have been actively involved in all the discussions we’ve had strategically here over the last months and we’ve had very many of those. It’s just a very healthy environment right now. Everything is on the table.”

Hall’s strong relationship with Krueger – the slick winger enjoyed a breakout season under the coach with the Edmonton Oilers – was a huge factor in him signing a one-year, $8 million contract with the Sabres on Sunday. When Hall, 28, was close to choosing a new team earlier that day, he requested to talk to Krueger again.

After Hall signed, he said he could see it in Krueger’s face during their video chat how badly he wanted him to join the Sabres.

“We really spent a lot of time over the last couple of days between ownership and myself and Ralph and others just really having open, honest communication with Taylor and his representatives and got to this point,” Adams said on a Zoom call Sunday. “(I’m) really excited about that.”

The first free agent the Sabres signed, winger Tobias Rieder, played for Krueger with Team Europe at the World Cup of Hockey in 2016. The Oilers drafted Rieder in 2011 when Krueger was an associate coach. Rieder was also teammates with Krueger’s son, Justin, with Team Germany at the World Championship.

The Oilers also drafted defenseman Brandon Davidson in 2010, the year Krueger joined them. Davidson played for Edmonton’s AHL affiliate when Krueger was the Oilers’ head coach in 2012-13.

Before free agency started, the Sabres re-signed winger Zemgus Girgensons to a three-year, $2.2 million contract. The Latvian, who thrived under Krueger, received, a $600,000 yearly raise.

“The important thing is all of these players are coming here for the reason, that they’re truly coming here not because we were the last option but because we were the first option for them,” Krueger said of the new players. “We have to work hard to build on this feeling that we’re getting now when we talk to the players that are coming and it’s just powerful when everybody unites like this in building the organization. And I’m pleased to be right in the middle of the team and nowhere but there.”

Smith, 28, has compiled four goals, 11 points and 276 penalty minutes in 135 games with the Amerks over three seasons.

The Sabres signed Smith to a two-way contract when they needed some toughness last season, and he played his only NHL game Dec. 31.