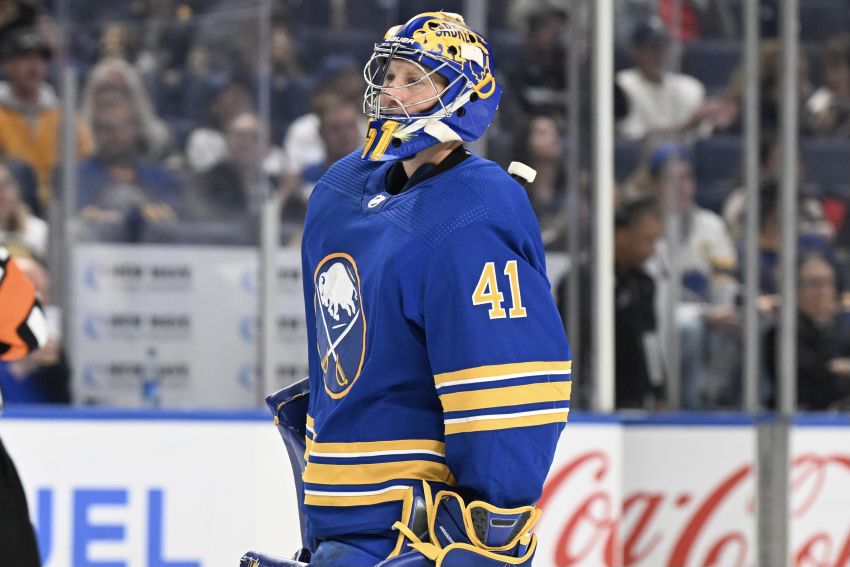 BUFFALO – Among goalies who have played at least 10 games this season, Sabres veteran Craig Anderson’s .921 save percentage ranks seventh in the NHL.

That’s 55 points higher than Ukko-Pekka Luukkonen, the rookie who has been receiving the majority of starts with Eric Comrie sidelined. Before Comrie suffered a lower-body injury, he compiled an .887 save percentage.

Anderson, 41, has performed a lot better than the Sabres’ other goalies this season. Overall, he has a 6-4-1 mark and a 2.71 goals-against average in 12 outings.

In Tuesday’s 6-0 victory over the Los Angeles Kings, Anderson stopped 40 shots, recording the 43rd shutout of his decorated 20-year career.

The American is the Sabres’ backbone and one of their biggest difference-makers.

Right now, Anderson, the NHL’s oldest player, is clearly the better option for the Sabres, who ranked last in the eight-team Atlantic Division.

Why not play him more often, or at least sneak in an extra start here for there?

Well, given his advanced age, the Sabres have been careful about his workload, making sure he has the proper rest between starts.

Only once this season has he started back-to-back games. That was on three days rest. At least a five-day break has accompanied his other starts. He recently did not play for a nine-day stretch as Luukkonen earned three straight nods.

Coach Don Granato likes the Sabres’ plan for keeping Anderson fresh and seems intent on sticking to it.

“Any of us that have aged, we know that as you age, your body, it’s more challenging to get up and go, and factor that in at the highest level in the world,” he said following Wednesday’s practice at KeyBank Center. “He didn’t wake up this morning, like you and I and everybody else. You play a game in the NHL, you wake up the next morning, you’re feeling it and so the recovery period in between until you can get your game back up to that high level is different.

“I want to make sure we’re putting all our guys in positions to succeed. And for Craig, I think that work-to-rest ratio is something that’s significant to his ability to play at the level we saw (Tuesday).”

The Sabres begin a three-game road trip tonight against the Colorado Avalanche.

In other news, Comrie participated in today’s pregame skate, his first session with his teammates since going down on Nov. 16. Granato told reporters in Denver that Comrie is day to day and the Sabres don’t have a target date for his return.