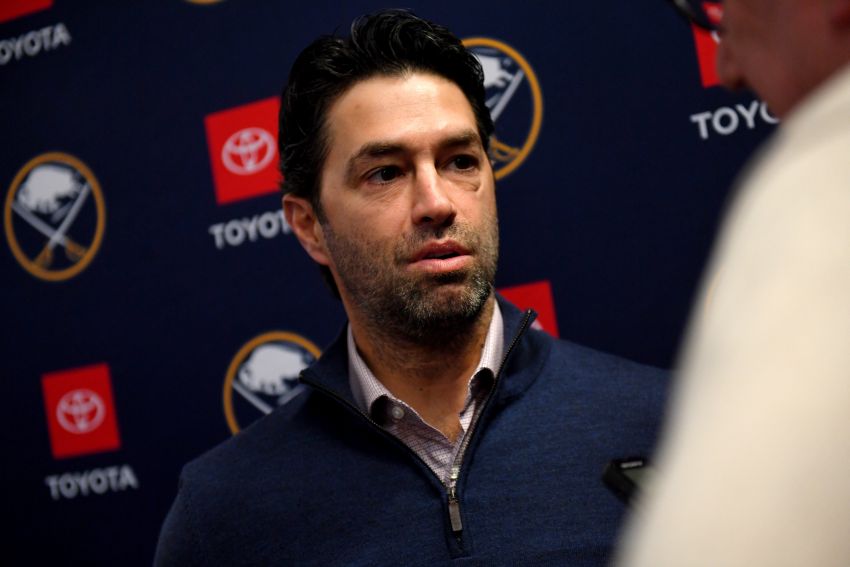 But having bounced around and played for four teams in five years, Peca knew it was time to step away after 14 seasons and dedicate more time to his family. He couldn’t accept the coaching job.

“The family makes sacrifices and has to do a lot for your career to succeed,” said Peca, who on Tuesday was named an assistant coach with the Rochester Americans, the Sabres’ AHL affiliate. “So my son had lived in five cities in five years toward the end of my career and he was at an age where I didn’t want that to happen anymore.”

So Peca, one of the most popular players in Sabres history, moved back to Buffalo and began his post-playing career with the Jr. Sabres in coaching and management roles. He was the Ontario Junior Hockey League’s Coach of the Year in 2012-13.

“I actually learned a lot over the 12 years coaching at various levels, junior and so forth,” Peca said on a Zoom call Thursday. “Never lost the passion. I think it just helped me fall even more in love with the mentoring and coaching aspect of the game.”

After Peca’s children left for college, he felt it was time to pursue coaching opportunities at higher levels. He spent last season as a development coach with the Washington Capitals, running the team’s taxi squad practices among his other duties.

When a spot on Amerks coach Seth Appert’s staff opened last week because the Sabres named Adam Mair director of player development, he looked to Peca. During several phone conversations last summer, Peca and Appert learned they shared the same views on hockey and life.

“I don’t think I’ve had many more conversations with a hockey mind that really lines up with mine as much as Seth does,” Peca said.

Appert said: “When you spend time talking hockey and people and family, I think that there’s a lot of things that really resonated for both of us that we felt we were on the same page about a lot in terms of what matters.”

The chance to coach with Appert is special to Peca.

“As thrilled as I am to be back within the Sabres organization where I spent a lot of my career, I’m more excited and this job was more exciting to me because I get to work with Seth,” said Peca, who joins ex-Sabres defenseman Mike Weber on Appert’s staff.

Peca, of course, ranked as one of the NHL’s premier two-way forwards in the late 1990s and early 2000s. The center nicknamed “Captain Crunch” for the ferocious hits he laid won the Selke Trophy as the league’s top defensive forward with the Sabres in 1996-97 and with the New York Islanders in 2001-02.

Following his arrival in 1995 from the Vancouver Canucks in the Alexander Mogilny trade, Peca spent five seasons with the Sabres, helping them morph from a rebuilding team into a perennial Stanley Cup contender.

Legendary goalie Dominik Hasek is widely regarded as the Sabres’ most valuable player from that era. Still, it’s highly unlikely they would’ve reached the 1999 Cup final or won six playoff series in a three-year span without Peca.

But Peca kept a home in Buffalo and always returned. As a coach, he wants to instill in Sabres prospects a sense of pride in the community and team.

“To understand what it means to be a Buffalo Sabre and to play in the City of Buffalo in front of those fans, it’s a gift, it’s a privilege and when players understand that, maybe they give a little bit more, they’re a little bit more emotional about what their path means to them,” he said.

These days, the Sabres are the NHL’s bottom-feeder, having missed the playoffs a record-tying 10 straight seasons. The idea of being part of the solution and helping lead the franchise back to glory excites Peca.

“One of the things I was most proud of was when I got traded from Buffalo to the New York Islanders, they hadn’t made the playoffs in eight years,” he said. “Nobody was really giving us a chance, and a lot of people … thought I’d be upset with going there, which I wasn’t because I relish the opportunity to make a difference for the organization.

“Coaching is really not much different in that respect. You’re not on the ice doing it at game time, but you can certainly have an impact as a coaching staff on the players. So I’m just really looking forward to it. I wish it was September already so we can get going.”