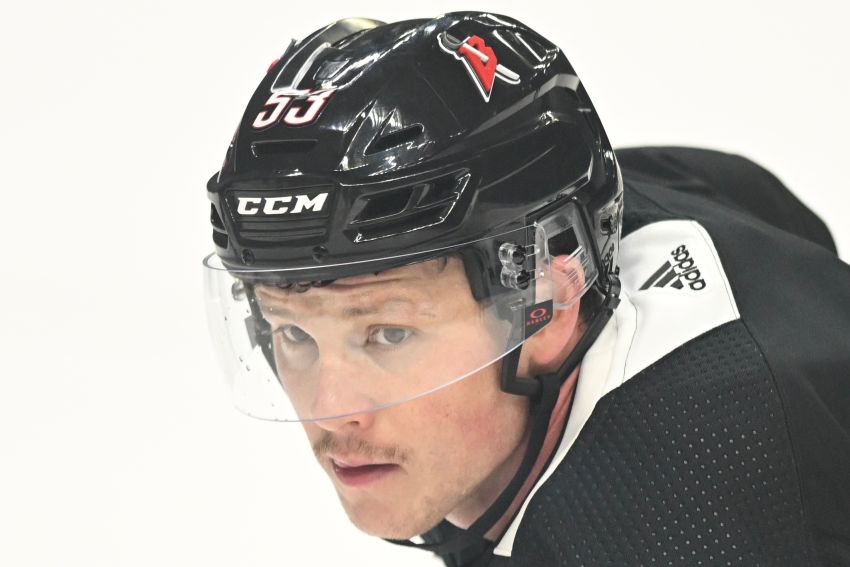 BUFFALO – Was it the jersey, the popular black and red “Goathead” the Sabres have brought back this season and sported for the first time Wednesday? Did some of the energy they showcased a night earlier in ending their eight-game losing streak carry over?

Maybe a combination of both?

For the second straight game, the Sabres enjoyed a supercharged start, getting a goal from scorching winger Jeff Skinner at the 18-second mark that helped buoy them to a convincing 6-2 victory over the St. Louis Blues.

In downing the Blues, who had won seven straight games, the Sabres displayed their early-season form, attacking in waves all night before an amped “90s Night” crowd of 17,302 fans in KeyBank Center.

A night earlier in their 7-2 shellacking of the Montreal Canadiens, the Sabres scored twice by the 52-second mark.

“We talked pregame that we felt there was a good chance our guys would be energized from last night and feed off that,” Sabres coach Don Granato said. “Skinner scores right away and there’s that enthusiasm. The guys were very excited going into tonight knowing what the night was. There was lots of chatter about the uniform and the history of the team and the franchise. Our guys love that stuff. They felt it tonight and I think the crowd was incredible in helping that.”

This wasn’t an ordinary Wednesday night game. Clearly, the jerseys, which the Sabres originally wore from 1996 to 2006, created excitement in the building throughout the Thanksgiving Eve affair.

“From the first moment that I put it on, I didn’t want to take it off after that game,” winger Alex Tuch, a rabid Sabres fan growing up, said of the jersey. “That was unbelievable. I mean, you saw the crowd get into it, started doing the wave, they started doing the Buffalo chant. They were on top of it, they were dialed in. … They were in the game from the drop of the puck and it really helped our team tonight.

Skinner said: “We all live here, right? We’re a part of the community so I think for us, it’s inevitable that that’s going to catch up into the locker room and guys are going to feed off that excitement.”

Fans kept singing 90s songs long after the audio stopped. They spontaneously broke into the “Shout” song. When they started doing the wave, Granato said the bench almost became distracted.

“It was a different level of noise,” he said. “It was a pretty neat environment.”

Tuch, who showed up to the rink wearing a blazer with the ‘Goathead’ logo stitched inside, said he “was a little nervous” about how the crowd would react Wednesday. Sure, they had won Tuesday. But they looked downright awful at times recently as their losing streak progressed.

When he saw fans filtering in with black and read attire, he knew they’d be behind the Sabres.

“I felt like I was one of the fans tonight, too, back in the good old days of the ‘Goathead’ jersey, those runs they had,” said Tuch, who had two assists against the Blues and has recorded 10 points in his last five games.

After Pavel Buchnevich’s power-play goal tied it 53 seconds into second, the Sabres quickly put the game away, roaring back with three goals later in the period.

Center Dylan Cozens scored two minutes after the Blues tied it, then winger Victor Olofsson’s power-play goal at 5:57 put the Sabres up 3-1.

Skinner scored a power-play goal at 13:01 and has compiled a whopping four goals and seven points in the last two games.

For the second straight night, the Sabres buried their opponent.

“We’re … finishing our opportunities,” Tuch said of what has changed in the last two outings. “I think not only we’re getting momentum, we’re having good starts, we’re playing simpler, we’re harder to play against. We’re winning puck battles, I think, in our D-zone that lead to offensive zone chances.”