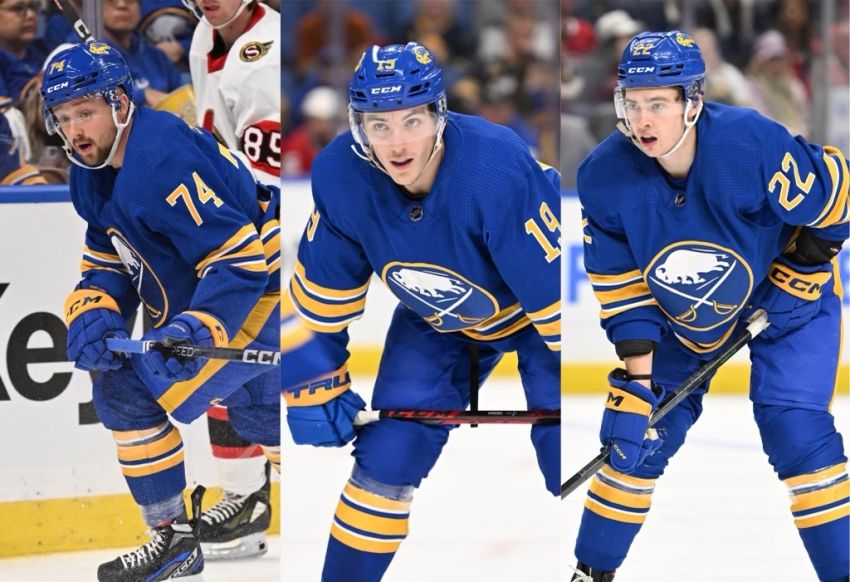 (From left) Rasmus Asplund, Peyton Krebs and Jack Quinn have each sat out two games this season. ©2022, Micheline Veluvolu

BUFFALO – For two recent games, Sabres winger Peyton Krebs sat in the press box in his suit and tie scribbling notes as he watched the action unfold below him.

Krebs, 21, enjoyed regular duty as last season progressed, playing 48 times and establishing himself as a member of the Sabres’ talented young core.

But right now, even after waiving Riley Sheahan on Sunday, the Sabres still have 13 healthy forwards, meaning one must sit out each game.

So Sabres coach Don Granato has been rotating his forwards all season, scratching one, in addition to Sheahan, for two-game stretches. Through eight contests, Krebs, Vinnie Hinostroza, rookie Jack Quinn and Rasmus Asplund have all sat out.

Someone will have to be scratched for tonight’s game against the Detroit Red Wings at KeyBank Center.

Granato has stressed he’s not benching anyone.

“The biggest message is you’re still a huge part of this team,” Krebs said prior to Saturday’s 4-3 overtime win against the Chicago Blackhawks. “We want you out there. It’s, ‘We’re going to get some other guys going.’”

An injury usually opens up a spot and depth is tested. The Sabres’ forwards, however, have remained healthy. Their defense corps, meanwhile, has three regulars injured.

“We’re really healthy up front,” Granato said. “I wish we were healthy on the back end. When you have that, you have guys, 23-man roster, and if everybody’s healthy, only 20 play. So anybody can understand that. …

“They all deserve to play. You just can’t play them all.”

Granato said the forwards have handled sitting out “about as well as you can handle it.”

“It (stinks) to have to sit a guy healthy when you know they’re competing and playing hard,” he said. “It’s not a good feeling.”

While it doesn’t feel good, Krebs said he understands why the forwards must be rotated.

“We got a really deep lineup and a lot of young guys that want playing time, so I’m just trying to stay positive every day,” he said. “… I just try to make my mark and same with those other guys. So it’s exciting. I mean, we’re all competitive and we all love to win.”

Krebs said he tries to make the most of his unique opportunity watching a game up top by studying the play, taking notes and even following the puck around with his pen.

When you view a game high above the ice, the movements looks slower and tendencies are revealed.

“You realize you have more time than you think and you can allow yourself to be a little more calm with the puck,” Krebs said.