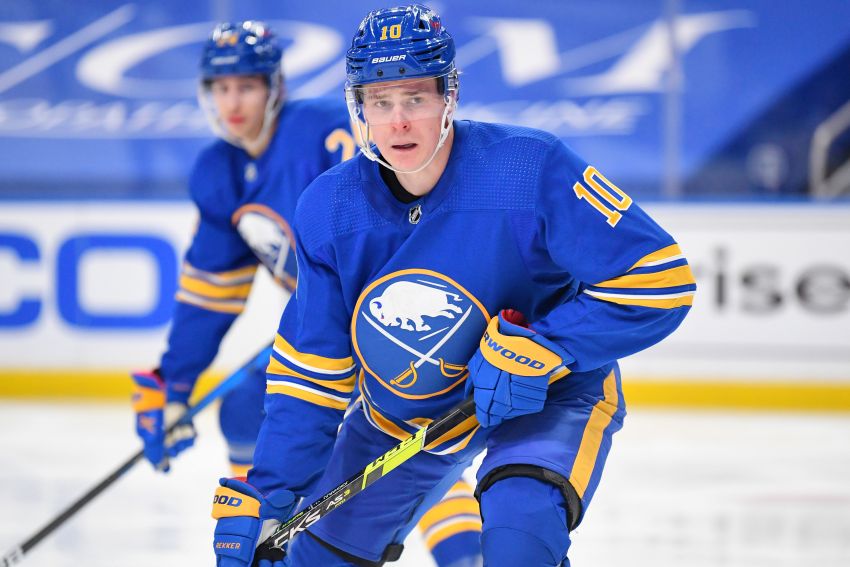 Henri Jokiharju has had two stints on the taxi squad this season. ©2021, Micheline Veluvolu

The Buffalo Sabres recalled defenseman Henri Jokiharju, who had sat out five out the last six games, from the taxi squad prior to Tuesday’s 3-2 road loss to the New Jersey Devils.

The Sabres also summoned defenseman Brandon Davidson from the taxi squad and sent rookie defenseman Jacob Bryson and center Rasmus Asplund back to the practice group.

Jokiharju, 21, established himself as one of the Sabres’ steadiest defensemen last season while playing all 69 games. But the Finn has struggled this season, getting demoted to the taxi squad twice.

What has happened to him?

“With the puck last year, he could’ve been our leader in maintaining possession coming out of our end,” Sabres coach Ralph Krueger said on a Zoom call prior to the game at Prudential Center. “He just hasn’t been able to find those plays that he had last year.”

Krueger believes Jokiharju, who often initiated the attack last season, has been overthinking or trying too hard.

“I just found he was almost overly aggressive in some of his plays of late,” he said.

To make room for Jokiharju and Davidson, the Sabres demoted Bryson, who had played eight straight games, and scratched defenseman Matt Irwin.

Bryson, 23, has quickly emerged as a bright spot in an awful season. He played beside Rasmus Ristolainen in Monday’s 6-0 loss to the Washington Capitals, skating 18 minutes, 48 seconds.

Why sit out Bryson?

“It’s not a season to overvalue those situations,” Krueger said of why some playing are being scratched. “We need to create as much energy and physicality as we need within the game, and we just felt it’s a good time for Jacob to take a rest. We love the games he’s been playing. We love his development.”

The Rochester Americans could play as soon as this weekend after having three players and a member of their support staff test positive for COVID-19, coach Seth Appert said on a Zoom call Tuesday.

So far, three Amerks games have been postponed. They paused their season late last week.

Appert said the Amerks have had two consecutive days of negative testing. If they keep testing negative, they plan to gather today as a small group and have a full practice Thursday.

The Amerks are scheduled to play a road game Friday against the Utica Comets.

“Our players have been nothing but exemplary in their on-ice work ethic and competitiveness but also in their off-ice decision making and habits that they’ve lived their life,” Appert said. “This is an unfortunate situation, it happened at no fault of our players. We made decisions that we made in terms of postponing games out of abundance of caution and to avoid a situation where we had a mass spread, either to us or to our opponents.”

Appert said according to protocol, the Amerks could’ve played last weekend. They shut down to limit the number of positive cases.