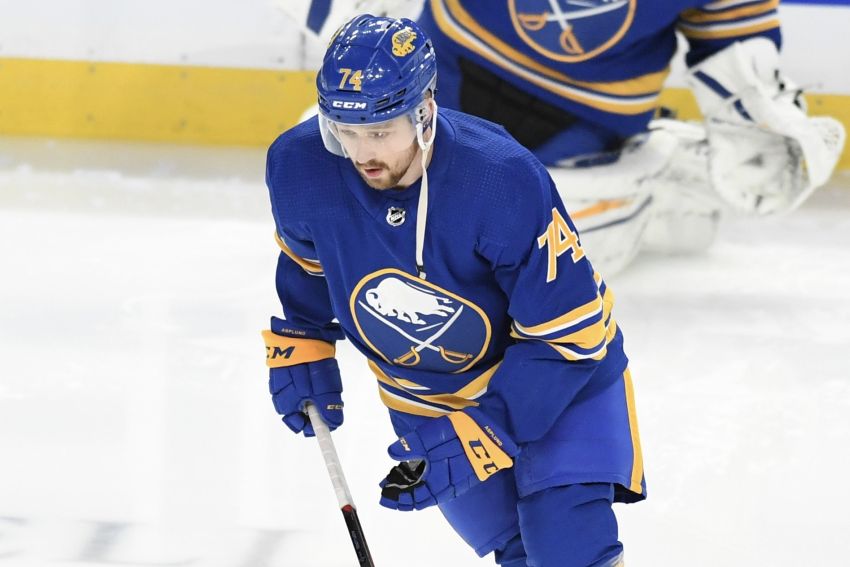 BUFFALO – The grind of an unforgiving seventh-month, 82-game NHL season has at times been difficult for Sabres winger Rasmus Asplund to handle.

Asplund, 24, said he felt tired, mentally and physically, when he hit the 30-game mark. He has also had trouble adjusting to time changes during road trips and playing back-to-back contests.

So the Swede said his first full NHL season – he played 28 games last year and 29 times in 2019-20 – has taught him he needs to become almost robotic in his daily approach.

Asplund has been watching veteran winger Kyle Okposo, 33, to learn more about his habits and routine.

“That’s thing I’ve been learning and really learned from a guy like Okposo,” Asplund said prior to Wednesday’s 3-2 shootout loss to the Winnipeg Jets at KeyBank Center. “He comes in the rink (the) same time every day, does the same things like a robot.”

Asplund acknowledged he did not have much of a routine – “I started to do different things and all that,” he said – when he began struggling offensively in December.

After the NHL All-Star break in February, however, he began doing things differently, and he has seen positive results.

“Now all my days look the same, and I think that helps me mentally and physically to be able to play at a high level every night,” Asplund said.

He added: “It’s just been for me, figure out how to be an NHL player for a full 82 games, and I think I’m starting to find the key things to be that player.”

If Asplund played for a different coach, he almost certainly would’ve been scratched this season. He ended a 46-game goal drought Sunday, scoring for the first time since Nov. 21.

“It was a lot of weight that got away from my shoulders,” said Asplund, who scored four goals of his six goals in the first eight games this season.

Most coaches, of course, don’t possess Don Granato’s patience. Instead of benching players, he usually lets them play through their problems.

Asplund, for example, averaged 13 minutes, 46 seconds of ice time during his marathon goalless stretch, about one minute below his overall season average. He has been skating at left wing on scoring line beside center Casey Mittelstadt and Victor Olofsson.

“That helped me a lot, and I’m grateful for it, too,” Asplund said of Granato sticking with him. “I think if Donny doesn’t have that approach he has to all our younger guys, I would probably be in the press box for a couple games during this stretch that I didn’t score. … I’m glad that I’ve been figuring it out and playing well now.”

Asplund has been trying to develop a new level of consistency.

The Jets played without winger Kyle Connor, whose 41 goals rank fifth in the NHL, and defenseman Nate Schmidt, both of whom entered the NHL’s COVID-19 protocol Wednesday morning.