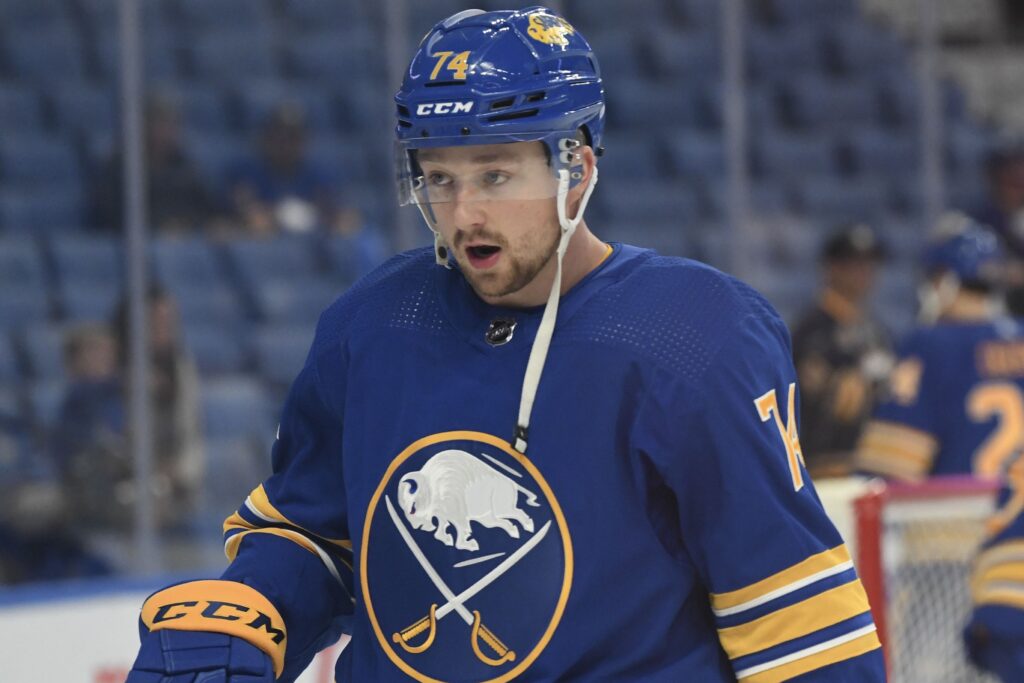 BUFFALO – Rasmus Asplund would catch himself falling into old habits. Before the Sabres winger went to sleep or when he woke up, the previous game might be weighing on him.

Asplund, 24, has worked to develop the mental side of his game. Following his arrival in the NHL two years ago, he became so tired mentally he learned exercises to help reset his mind. His new approach worked, and last season he would put games away and move on.

But at times over the last three and a half months, Asplund’s struggles have taken a toll on him. After a fast offensive start, the Swede has a 27-game goal drought and has scored just once in his last 36 outings.

“I started to fall back a little bit, too, just starting to think about things when you’re going to sleep, you think about it the next morning,” Asplund said prior to Thursday’s 4-3 overtime loss to the Columbus Blue Jackets at KeyBank Center. “I think … I’ve been able to turn it around a little bit here now again.”

Asplund has recorded just one assist in his last 14 appearances. He hasn’t scored a goal since Nov. 21. Still, he and Sabres coach Don Granato believe he has started doing the right things to be successful.

In a 5-2 loss to the Vegas Golden Knights on Feb. 1, his first outing after a false COVID-19 positive sidelined him two games, Asplund pumped five shots on goal, tying his career high.

“I’m creating scoring chances,” he said. “I think … that’s the start to be able to score.”

Asplund, at his best a consistent two-way presence, has produced offense at every level of hockey. After slow start in the NHL, he registered seven goals and 11 points in 28 games with the Sabres last year.

He enjoyed a terrific opening three weeks this season, recording four goals and 10 points in the first 11 games.

“I started off the season with my first 15 games were unbelievable,” Asplund said. “I just felt confident and all that. Then I had a stretch of 10 games where I think I played horrible, to be honest. I didn’t find my game at all.”

Granato said a player struggling to score often stresses out about it and can lose sight of the intensity and rhythm needed to play the proper way.

“He’s a very intense person,” Granato said of Asplund. “He trains hard over the summer, he’s a competitive guy. And I think a little of the psychology interfered with that, with him bringing that every night, that competitive intensity and trusting that goals follow or are a byproduct of that. And I think he lost that a little bit.

“I think he’s done a nice job to regain a focus on playing the way he needs to play and I think the results for him individually will follow if he continues that.”

Granato said Asplund possesses high expectations for himself that are difficult to live up to.

“That produces frustration in him, but he always responds with more determination,” Granato said. “He’ll put his head down, but he never feels sorry for himself. And that’s why I would, as a coach, have confidence in him certainly in the long-term of things.”

In the midst of his long dry spell, Asplund recently experienced the oddest two days of his career.

The morning of the Sabres’ 3-1 road win over the Arizona Coyotes on Jan. 31, Asplund, two other players, one coach and four members of the team’s traveling party tested positive for COVID-19.

Then Asplund received a negative test by lunchtime, so he was prepared to play.

“When I was about to go to the rink, it was a positive test again,” he said. “So it was all kinds of emotions. You didn’t know if you were going to be stuck in Arizona for a week, and you’re just starting to think a lot of how the next week’s going to look like.”

After more retesting, eight PCR tests returned negative the next day. Everyone could leave protocol and travel to Colorado, where the Sabres played the Avalanche that night.

Defenseman Rasmus Dahlin and Victor Olofsson, the other players in protocol, scrambled to the airport and boarded a flight to Denver before Asplund. They made it to Ball Arena shortly before the game and played.

Asplund’s flight, however, was delayed 20 minutes, preventing him from getting to the rink in time.