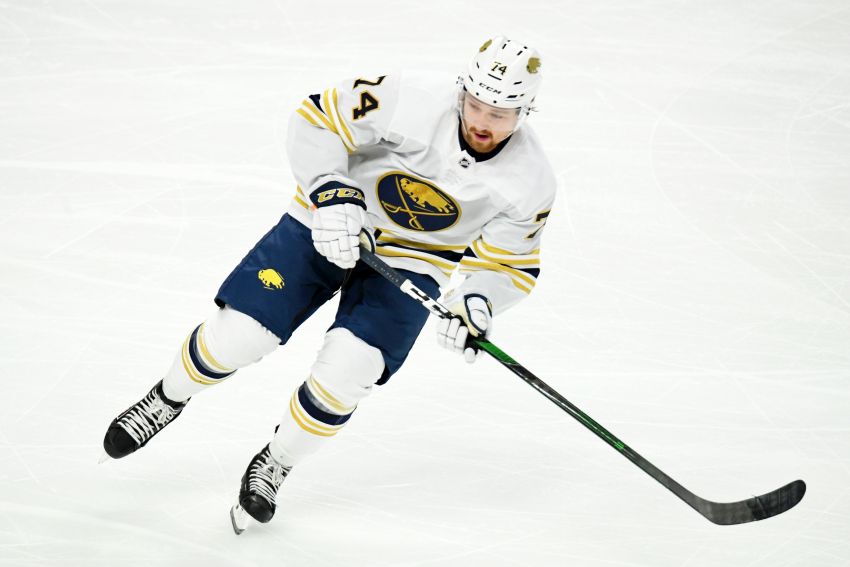 BUFFALO – After the Sabres recalled center Rasmus Asplund last month, his parents traveled from Sweden to catch some of his first NHL games.

For about a week, they watched their son, one of the Sabres’ top prospects, grow more and more comfortable.

“I knew it was close,” Asplund said of his first NHL goal.

But his parents planned to leave town following Monday’s game against the New Jersey Devils.

“It was my last chance to score with them in the stands,” said Asplund, who one-timed Casey Mittelstadt’s pass in from high in the left circle 19:02 into the game.

Naturally, watching their son score in the Sabres’ entertaining 7-1 win made his parents emotional.

“This is big, like we’re living in a dream,” Asplund said following his 10th NHL game. “I think none of us have realized how big this is and how much work we put in to get to this point.”

In other news, Sabres forward Evan Rodrigues, out the last five games with a lower-body injury, practiced this morning inside KeyBank Center.

Rodrigues said he would like to return from his “little tweak” Thursday against the Calgary Flames, the start of a three-game road trip.

Following a slow start, Rodrigues was starting to find a groove before leaving the Sabres’ 5-2 road win over the Florida Panthers on Nov. 24.

“I felt like I had my feet back under me, I was using my speed a lot, handling the puck,” Rodrigues said. “I just have a lot of confidence. Obviously, it wasn’t great timing, but it healed up pretty quick, which was nice, better than thought.”

At the end of today’s practice, the Zamboni doors opened and someone wearing a Buffalo Bills helmet and sandals drove a snowmobile on the ice.

It was Sabres defensemen Zach Bogosian, who presented the machine to assistant equipment manager George Babcock on behalf of the players for his 2,000th NHL game.

After running out to hug the players and posing for a picture, Babcock took the machine for a spin on the ice.

Bogosian had a maintenance day from practice.