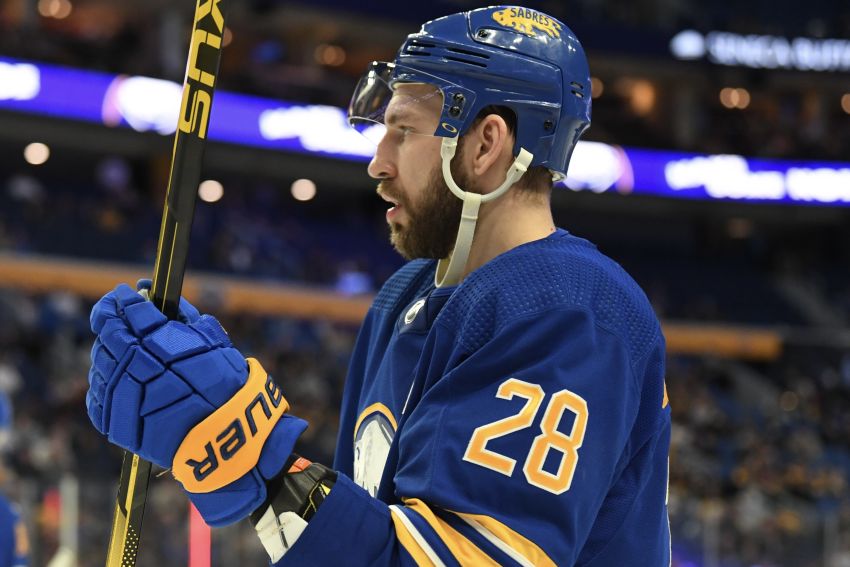 The Sabres just ended their most successful and significant month in years, finishing March 8-3-3. They’ve earned at least one point in seven consecutive outings, their longest stretch since their 10-game winning streak in November 2018.

Every team they faced in March was either in a playoff spot or battling for one.

On Wednesday, the Sabres pounced on the Jets, a team one point out of a wild card spot, holding them without a shot for first 9:13.

Winger Zemgus Girgensons scored the first of his two goals 14:39 into the contest, and the Sabres outshot the Jets 13-5 in the opening period.

But goalie Connor Hellebuyck, the 2019-20 Vezina Trophy winner, held the Jets in the game before the crowd of 8,055 fans inside KeyBank Center.

“I felt that Hellebuyck was very good for them,” Sabres coach Don Granato said. “We could’ve had some separation. There wasn’t, and credit to him. I thought the skilled players for Winnipeg made a pretty good push in the third. …

“We played very well early, and not that we did poorly late, but we played better early and couldn’t get that separation.”

Blake Wheeler tied it 4:13 into the second period before Girgensons’ second goal at 8:24 put the Sabres back up. But Mason Appleton tied it again 19:39.

Girgensons, who has scored 10 times this season, had his first two-goal game since Nov. 24, 2019 against the Florida Panthers.

The Latvian has been a consistent presence since returning from a lower-body injury March 17, showcasing strong chemistry at left wing beside center Cody Eakin and Kyle Okposo.

“Zemgus, it was nice to see him score a couple tonight,” Granato said. “He could’ve had a couple more. Smart player, he’s a worker, he’s always working, he’s always prepared to play. And by virtue of all that, he’s a heck of a leader for us. So good to see him rewarded.”

Granato has utilized the line to start games because of the tone it sets by putting the puck in the right spot and pressuring.

“That line has been good the last couple weeks, not only in their own play, but leading for us, showing us the way to play simple, hard and direct,” Granato said. “And I think guys have fed off of that.”

On Wednesday, the line created some early scoring chances and momentum.

“Simple, hard, north hockey,” Girgensons said of the trio’s style. “I think that’s how we want to start every game, set the tone that we’re gonna work hard, get the pucks deep and play a simple hockey game. Once you start playing simple, after that the game opens up a little bit and you can start making some more plays.”

Okposo assisted on both goals and reached the 40-point mark for the eighth time in his year. Hellebuyck made 35 saves. Anderson stopped 25 shots.

The Sabres have gone to a shootout in three of their last five games. They had just three shootouts in their first 63 contests.