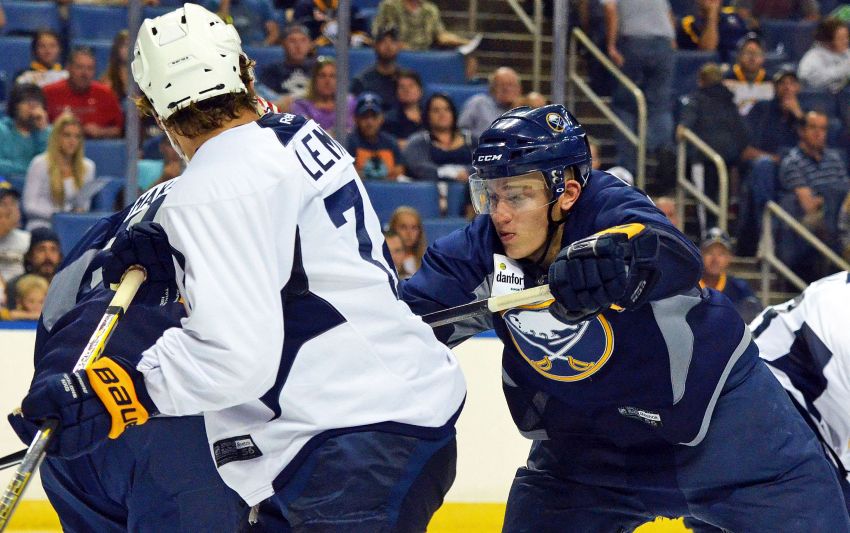 BUFFALO – While other Sabres prospects have packed on weight this summer, defenseman Rasmus Ristolainen has “lost a couple pounds.”

Later on, Ristolainen and agitating winger Brendan Lemieux jawed at the end of a period.

“Two guys with emotions,” said Ristolainen, the eighth overall pick in 2013. “We play hard. Sometimes there’s something going on. That’s it.”

Ristolainen’s transformation in the last year has impressed Chadd Cassidy, who coached him 39 total games with Rochester last season.

“Just seeing the difference in his body, physically, and we talked about it all the time in Rochester,” Cassidy said. “You forget these guys are still boys and they’re still developing. Even though they’re men as hockey players, they’re still boys as people. (It’s great) to see his physical transformation and how seriously he’s taken what we’ve tried to get him to do.”

The “little bit of the baby fat” Ristolainen lost will help his conditioning, Cassidy said. The youngster struggled finishing his shifts with the Americans.

“It usually ended up in some scoring chances against us,” Cassidy said. “(He’s) a really aggressive learner. He took every piece of advice that we have him throughout the year and executed on it.”

Ristolainen, who played 34 games with the Sabres as a rookie, called his new physique “a big thing for me.”

“I want to show for everybody and myself that I’ve been working hard back in Finland,” he said.

Cassidy said goalies Nathan Lieuwen and Andrey Makarov will battle for No. 1 job with the Americans next season.

“Those two guys are going to probably be the guys in Rochester, at least to start with, unless there’s an injury, and it’s going to be a good competition,” Cassidy said.

Lieuwen’s recovered from a late-season concussion. He sat out Tuesday’s scrimmage so the Sabres could examine other goalies.