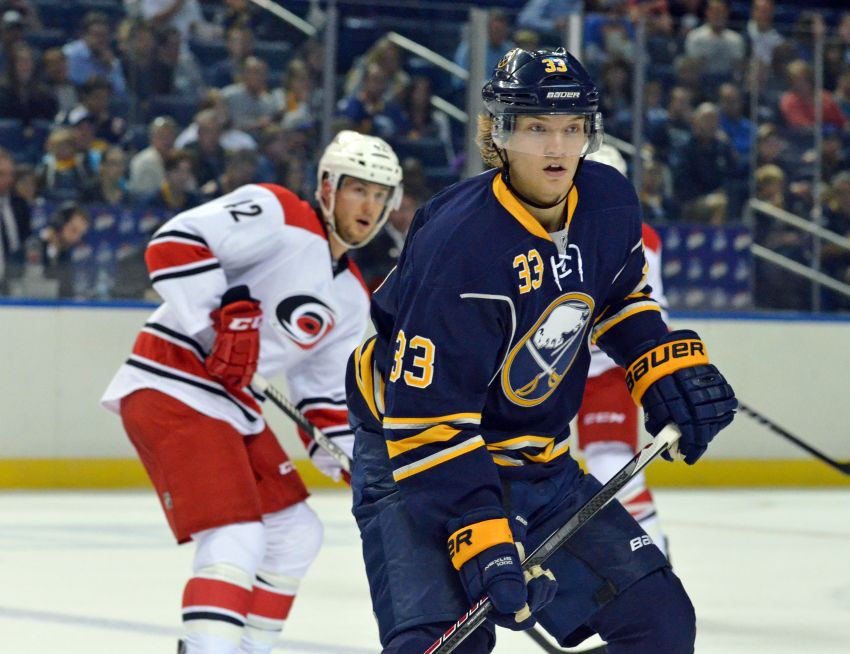 BUFFALO – This wasn’t a three-minute YouTube package of European highlights or a summer development camp scrimmage. This was slick Sabres prospect Joel Armia finally skating in some NHL action.

The hype surrounding Armia has been building since the Sabres selected the Finnish winger 16th overall in 2011. Yet few fans had seen the 20-year-old, who spent the last three seasons playing at home in SM-liiga, up close prior to Thursday’s exhibition home opener, a 5-2 win over the Carolina Hurricanes before 17,626 spectators inside the First Niagara Center.

Even curious teammates have been excited to watch Armia this training camp.

“It’s not just the people,” Sabres winger Thomas Vanek said, “all of us in here, too. You can see the talent there.”

So was Armia’s assignment. Sabres coach Ron Rolston skated him 15:11 on the No. 1 line beside Hodgson and Vanek, a terrific opportunity for the right winger to showcase his talents.

Clearly, the Sabres want to give Armia every opportunity to succeed.

Armia scored the Sabres’ first goal halfway through the second period after blocking Carolina goalie Anton Khudobin’s pass behind the net, grabbing the loose puck and racing to the open net.

“It happened so fast,” Armia said about the wraparound goal. “I don’t know what I was thinking there.”

Rolston added: “He played more confident as the game went on after he scored.”

For Armia, who debuted Tuesday in Columbus, camp has been a special experience.

“It’s the thing that I’ve always dreamed about, to play in the NHL,” Armia said Thursday morning.

Having already compiled 55 goals and 100 points over 149 games in a European men’s league, Armia’s used to competing against veteran competition.

“You play against grown men that are stronger,” Armia said. “They know how to play hockey. So that’s been a big difference in my development.”

Some natural talent has buoyed that development.

“You can see that he puts himself in good spots,” Vanek said. “Those are things you can’t teach. You either have it or you don’t, and he seems to have it.”

But make no mistake, Armia’s a raw youngster. He could be assigned to the AHL soon.

“He’s got to learn a lot of things offensively,” Rolston said. “He’s got a lot of tools. Those are the things, just how to jump in a hole at the right time, how to use other players more effectively in this league. A lot of times with a lot of skill you try to do things by yourself, and so he’s going to have to use some other players.”

Armia said jumping from Europe to the NHL and its smaller ice surface hasn’t been difficult.

“(At) first I thought it would be harder to play here on a smaller rink and it would be faster,” he said. “But I got used to it pretty fast. I feel better every day.”

“Really high skill set, probably I thought, in my eyes, the most skilled player on the ice up there in terms of his stick skills, hand-eye coordination, his ability to make plays, especially for a guy as big as he is,” said Cassidy, who coached Buffalo’s entry.

“There’s not as much time and space, so you take 15 feet off the walls,” Cassidy said. “I thought there was times when he would retrieve pucks in the offensive zone and he would turn and there would be a defender right on him, where he’s probably used to having a little more time.”

Cassidy added: “I think he’s going to continue to get better. I still think he’s got a long way to go just in terms of reaching his potential. But he is a real good player right now.”

Notes: Defenseman Brayden McNabb scored and added two assists for the Sabres. Center Johan Larsson scored twice. … Vanek wore the captain’s “C” for the second straight game. Hodgson and defenseman Henrik Tallinder were the assistants. … Former Sabres Nathan Gerbe and Andrej Sekera played for the Hurricanes. The Sabres traded Sekera for defenseman Jamie McBain on June 30 and waived Gerbe on July 3. … Sabres goalie Ryan Miller made 18 of his 34 saves in the first period. The Sabres split their goalies the first two games.