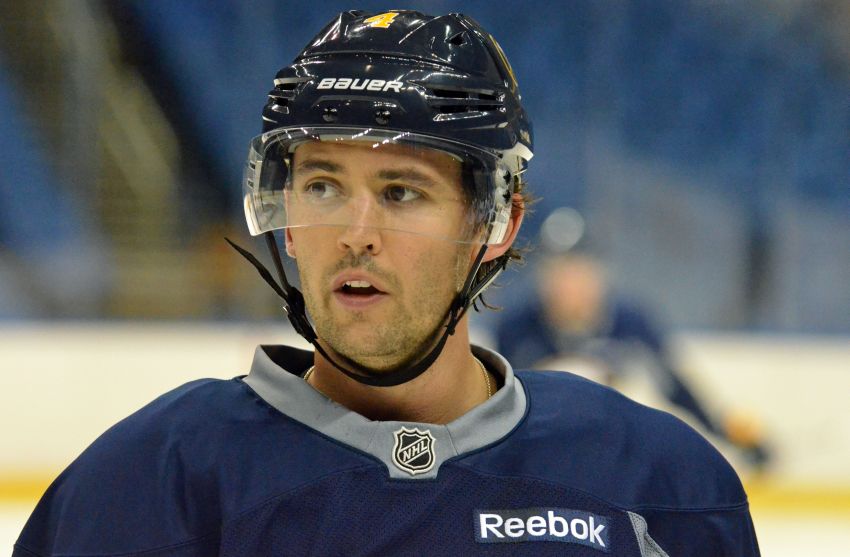 The new Sabres defenseman acknowledged Tuesday that workouts “kind of slipped away from me a little bit” during the lockout. But McBain had played briefly in Finland and felt ready for an abbreviated season with the Carolina Hurricanes following the work stoppage.

“My on-ice conditioning was just fine,” said McBain, who could face the Hurricanes tonight in an exhibition game at the First Niagara Center. “I played over in Europe. I played games. I had been in shape. So I was definitely in game shape.”

McBain, however, admitted his off-ice testing wasn’t up to the Hurricanes’ standards.

The 25-year-old stayed in coach Kirk Muller’s doghouse all year. The same slick youngster who had 15 goals and 57 points over the previous two seasons began 2012-13 as a healthy scratch.

“I was never kind of in his good graces it seemed like, and so when that happens, it’s tough to get out of,” McBain said. “So, I mean, I tried to battle through it. It’s one of those things that didn’t quite pan out, and here I am.”

McBain knew he would likely be traded during the summer. Sure enough, the Hurricanes dished him to the Sabres for defenseman Andrej Sekera on June 30 at the NHL Entry Draft. The Sabres said then McBain’s right-handed shot could help balance their defense tandems.

Following the deal, Carolina general manager Jim Rutherford criticized McBain, saying he would turn his game around but “he didn’t come to camp last year ready to play.”

“He wasn’t in good shape and because of that he didn’t have a good year,” Rutherford told reporters then. “He got himself into the coach’s doghouse and I really didn’t see that he was going to get himself out of it.”

McBain, 6-foot-2 and 200 pounds, called last season “one of those weird years.” His production dropped from eight goals and 27 points in 76 games to one goal and eight points in 40 contests.

“Obviously, the lockout didn’t help,” he said. “I kind of got off to a slow start. Things never seemed to build up. I eventually ended up getting moved at the draft. It’s just kind of the way things go. Bad years happen. So I’m looking forward to rebounding this year.”

That game is offensive.

“He’s (got) really good stick skills,” Rolston said. “In terms of talking puck possession, he can get you out of the zone, he can make a good outlet pass. He’s got a lot of poise with our puck coming out of the zone, really good in the offensive blue line. … He finds holes, he can finish. He can be a guy that plays on the power play.”

McBain said he loves having the puck on his stick, creating opportunities for forwards and joining the attack. He scored after joining the rush Sunday, when he was partnered with rookie Nikita Zadorov for the preseason opener.

McBain already feels comfortable here. Rolston coached him as a teenager at the world junior championship and new assistant Joe Sacco had him at the world championship this spring. McBain also attended the same Minnesota high school as Drew Stafford and has met Thomas Vanek at home in Minnesota.

“A fresh start was something I was kind of looking forward to,” McBain said.