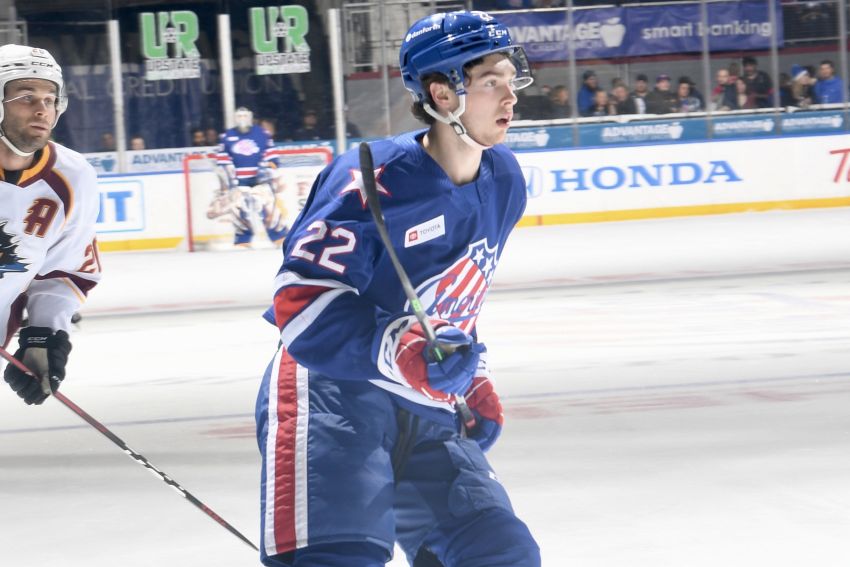 Buffalo prospect Jack Quinn has been on a tear all season with Rochester. ©2022, Micheline Veluvolu, Rochester Americans

ROCHESTER – In the opening minutes of Friday’s third period, Americans center Mark Jankowski fought off a defender behind the net and laid the puck on the doorstep for his linemate, Jack Quinn, to convert.

When goal scorers receive a nifty pass like that in close, they shoot, oh, just about every time. But Quinn, the most dangerous threat the Amerks have had in a long time, displayed poise under pressure, quickly dishing the puck to JJ Peterka on the other side of the crease.

Peterka converted the slick feed, and the Amerks went up 5-3 in Quinn’s first game back after having a minor setback in his return from a lower-body injury.

“I usually make that pass, to be honest,” Quinn said following the Amerks’ 5-4 win over the Cleveland Monsters at Blue Cross Arena. “I think I have pretty good vision. I think with JJ this year, he’s been the one giving me those passes pretty much the whole year. I feel like I’ve been getting used to it, so if there’s a chance I can give one back to him, it’s nice to be able to get it to him there.

Peterka said: “I was hoping he saw me, and he did.”

The play, Quinn’s second assist and third point of the night, illustrates why Quinn, 20, is one of hockey’s elite prospects. In his first full pro season, Quinn, the eighth overall pick by the Sabres in 2020, has developed into one of the AHL’s most dynamic players.

“The thing about it which was special is that Jack Quinn is considered a goal scorer, right?” Amerks coach Seth Appert said of Quinn pass to Peterka. “That’s the common theme of Jack, and he’s lived up to that, both in junior and in pro now. But a lot of the goal scorers are one-dimensional, and he is so not one-dimensional.

“He can play defense the right way, he can check, he can hunt pucks, win battles, he goes to hard areas and he has elite vision on top of his goal-scoring ability.”

The Amerks sorely missed Quinn as he recovered from a lower-body injury he suffered during his second NHL game Jan. 20 in Buffalo. After he recovered, the Sabres assigned him to the Amerks, and he played twice – March 4 and 5 – before aggravating the injury and missing four games.

On Friday, Appert put him at left wing beside Jankowski, a veteran, and Peterka, another rookie with whom Quinn has played with most of the year.

Following a slow start, the trio got going in the second period. Quinn scored his 20th goal 4:20 into the second period, grabbing Jimmy Schuldt’s pass at the outside of the left circle, cutting to the net and roofing a shot by goalie Jet Greaves.

Quinn, who has recorded 44 points this season, also assisted on Peterka’s first goal of the night later in the period.

While Quinn has endured long absences due to the lower-body injury and a bout with mono late in the fall, he has kept producing. On Friday, he reached 20-goal mark in just his 27th game, becoming the fastest Amerks player to hit that total since Luke Adam did it in 31 contests in 2013-14.

“He is an exceptional young man, a really great teammate, he’s a driver of our identity and our competitiveness,” Appert said of Quinn.

He added: “He has a very aggressive daily approach, and that gets him through difficult times.”

Rousek, 22, underwent ACL surgery last year and has been rehabbing in Rochester.

“It was a good first game,” Appert said. “He made plays, he looked comfortable with the puck on his stick, he didn’t look nervous. He didn’t probably get a ton of (ice) time but he got enough to get his feet wet.”

The Sabres selected Rousek in the sixth round in 2019, 160th overall. He has played four seasons of pro hockey at home in the Czech Republic.

Friday’s game was his first since April 17, when he played for Sparta Praha.

Rousek, who can play all three forward positions, said he considers himself a playmaker.

He said the biggest adjustment to the AHL has been having less time to operate on the smaller North American ice surface.

Friday’s game was Jankowski’s first with the Amerks since Nov. 27. The Sabres waived Jankowski, a veteran of 272 NHL contests, on Tuesday.

“Janko, his approach his whole season down here with us has been so incredibly impressive,” Appert said. “His play, but also the way he just goes about his business, how quickly he folded into the group. This guy’s been in the NHL a long time, right? He didn’t act like he was above being here.”