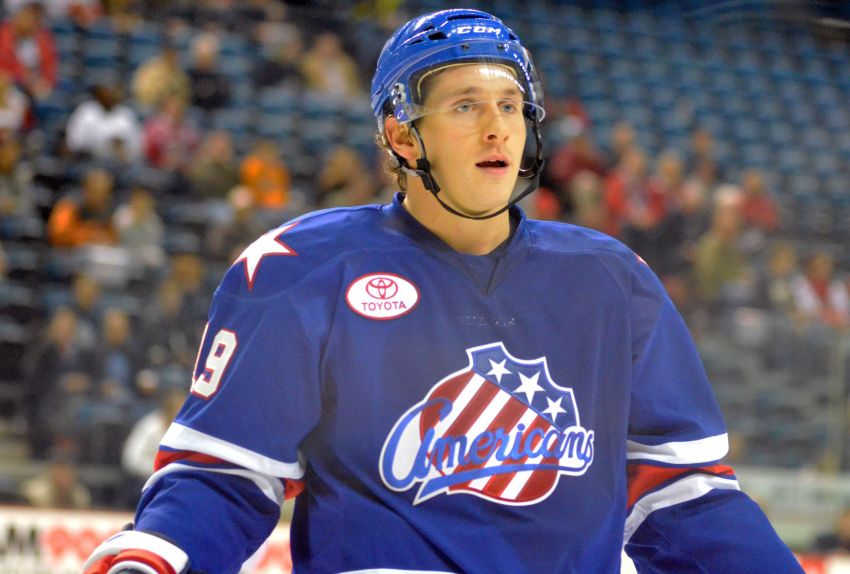 Luke Adam is one of the AHL’s top scorers this season. ©2013, Dan Hickling, Olean Times Herald

“I’m not focused on what the Sabres are doing,” Adam said Tuesday inside Bill Gray’s Iceplex. “Frankly, I don’t care what’s going on up there, what people are saying or how everything’s going.”

Adam, whose scorching eight-goal, 12-point start has made him one of the AHL’s hottest players through nine games, has successfully been concentrating on two things this season.

“I’m just focused on the Rochester Americans and focused on Luke Adam and what I can control as a hockey player to get me to the next level,” said Adam, who recorded an assist in Wednesday’s 5-3 win over the Hamilton Bulldogs.

Naturally, with the Sabres struggling so much and Adam piling up goals, he’s getting questioned about a possible recall. But the way he sees it, as an AHL player he’s “playing for 30 teams right now.”

“Yes, I am with the Buffalo organization,” Adam said. “But I’m trying to play well so someone takes notice. If it’s not the Sabres, if Darcy doesn’t think I deserve an opportunity or I’m ready for an opportunity there, maybe someone else will give me that opportunity.”

Having cleared waivers prior to the season, no one wanted to give Adam that opportunity. Getting bypassed, Amerks coach Chadd Cassidy believes, left Adam at a career crossroads as he began his second contract, a one-year deal.

“It’s kind of a wakeup call, I think, in terms of, ‘I’ve got to make some adjustments to my game if I want to get back to the National League level,’ and so far he’s shown that he’s willing to do that,” Cassidy said.

Adam started clearing his head last season. Prior to his April 2 NHL season debut, his first recall in almost 14 months, he acknowledged he had stopped worrying about the Sabres during the winter.

The Newfoundland native lasted four games, scoring once. It wasn’t a long or memorable stint, but at least he had made it back.

By now, Adam’s story is well known. He compiled 29 goals and 62 points with Portland in 2010-11, earning AHL top rookie honors. He quickly became a Calder Trophy candidate after starting 2011-12 as the Sabres’ No. 1 center between Jason Pominville and Thomas Vanek.

But following his 10th goal and 20th point on Dec. 17, 2011, Adam endured 20 pointless games before the Sabres finally sent him to Rochester, where he mostly struggled and was almost forgotten about.

“He’s already had some of those ups and downs where he got off to a great start, hit some bumps in the road, had to learn how to deal with a little bit of adversity and some situations that he didn’t like,” Amerks captain Matt Ellis said. “But I’ll give him credit, he came back this year with a great, positive attitude, almost like he left the negative energy behind.”

“What I can control right now is playing well and playing good hockey,” Adam said. “If I’m not doing that, then at the end nothing’s going to happen anyways.”

Adam’s play has wowed Ellis, his linemate in Portland.

“For him to have the start he’s having, he looks like a new player,” Ellis said. “There’s kind of an aura about him this year that he is a new player.”

It’s more than a mental approach, though. Cassidy said Adam has become better-rounded on the ice.

“The offensive side has always come relatively easy for him,” Cassidy said. “But I think he’s found when he’s kind of let his defensive game get away from him he wasn’t getting as many offensive opportunities because he was spending so much time in his own zone or not being put on the ice because he was a defensive liability.

“So we found that this year he’s committed to playing in the D-zone. He’s been a very reliable penalty killer for us. So that’s giving him more minutes, and I think all those things just give a player confidence.”