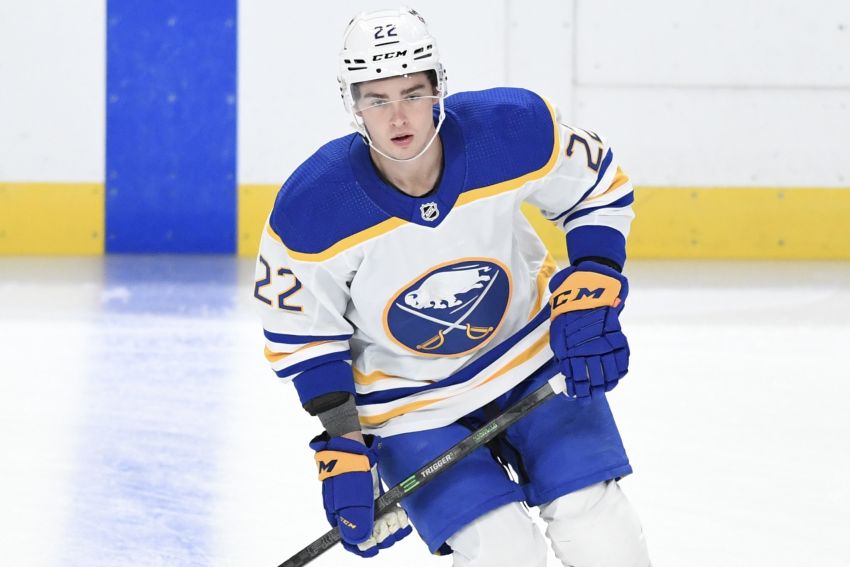 BUFFALO – If Jack Quinn hadn’t suffered a lower-body injury in Thursday’s 5-4 loss to the Dallas Stars, he likely would’ve kept playing for the Sabres in the coming weeks.

The Sabres, of course, won’t simply award their prospects a spot. But given their rash of injuries and that Quinn, 20, had performed so well – he scored his first NHL goal and assisted on another Thursday – he almost certainly would’ve earned a long look.

Instead, Quinn, who finished the game after getting injured in the first period, will miss “some time,” according to Sabres general manager Kevyn Adams.

Adams said the rookie would undergo an MRI on Friday. Right now, Quinn is one of 12 injured Sabres, a stunning number.

Quinn, who made his NHL debut Jan. 11, looked impressive in his first two NHL outings, consistently creating offense. In Thursday’s loss, he scored a power-play goal from the right circle 6:37 into the game and also assisted on center Dylan Cozens’ second-period goal. Quinn played 13 minutes, 15 seconds and pumped three shots on goal.

“It’s a bummer, he had another unbelievable goal, another assist,” Sabres coach Don Granato said following Friday’s practice at KeyBank Center. “He played through it two periods, which probably is a good sign, as far as you hope that the significance is a range there, you’re really waiting to see how significant the injury is there over the next few days.

“And the fact that he played through it, there’s hope it might not be as bad as it could be, that type.”

Quinn, who has scored an AHL-high 18 goals in only 24 games with the Rochester Americans, has already missed notable time this season.

The winger, the eighth overall pick in 2020, contracted mono and missed six weeks before returning Jan. 5. In seven AHL games since then, he has recorded seven goals and 11 points. He had a four-goal outing last Saturday.

“He’s a young guy, he’ll come back out of this even better,” Granato said. “Young guys, when they get time out, they don’t don’t stop improving. It sounds funny, it sounds odd, but it’s much like when he had mono, everyone was worried about how he’s going to come back. Well, he came back even better. They internalize more, they get to step back and soak some things in from a different angle and it does help them.”

To replace Quinn, the Sabres on Friday recalled winger Brett Murray from the Amerks.

Some other Sabres injury updates are below.

– Goalie Craig Anderson, 40, rejoined his teammates for Friday’s practice for the first time since suffering an upper-body injury Nov. 2.

– Adams said defenseman Will Butcher, who left Thursday’s game in the first period, would have a CT scan Friday to examine an upper-body injury. He said Butcher could be out a little bit.

– Adams said defenseman Jacob Bryson, out the last three games with an upper-body injury, could return for this afternoon’s home game against the Philadelphia Flyers at KeyBank Center. Bryson practiced Friday.

“I’m not comfortable putting him in tomorrow,” Granato said of Mittelstadt. “He hasn’t had enough practice to me, just watching him today, but he will probably be barking at me to be in that lineup tomorrow.”

Granato likes that Mittelstadt is itching to return.

– Adams said the Sabres hope to have winger Kyle Okposo back for their three-game western swing that begins Jan. 29 against the Arizona Coyotes. Okposo suffered an upper-body injury in Tuesday’s 3-1 road win over the Ottawa Senators.

– Adams said goalie Ukko-Pekka Luukkonen, out the last five games with a lower-body injury, is doing a little better than the Sabres originally anticipated. Adams said Luukkonen skated Friday morning. The Finn is expected to miss a few weeks.

– Adams said winger Vinnie Hinostroza, out since suffering a lower-body injury Monday, will be sidelined about four to six weeks.

– Adams said winger Drake Caggiula, out the last 22 games with an upper-body injury, went to see a specialist out of town.

Notes: Flyers defenseman Rasmus Ristolainen is expected to face the Sabres this afternoon for the first time since he was traded July 23. … Amerks forwards Ryan MacInnis and JJ Peterka both played Friday after spending time in the AHL’s COVID-19 protocol. … The Flyers have a 10-game winless skid (0-7-3) for the second time this season. They compiled a 0-8-2 mark from Nov. 18 to Dec. 8.