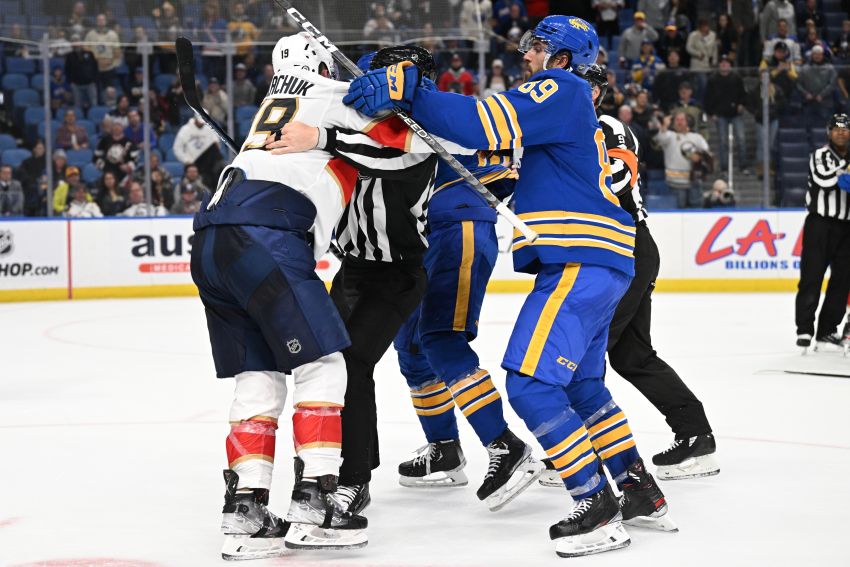 That three-month wait is too long for coach Don Granato, who loves the grit and tenacity the Sabres displayed while refusing to back down to the Panthers, one of the NHL’s heavyweights.

Saturday’s heated affair at KeyBank Center looked more like a late-season contest between two teams battling for a playoff spot, not game two of 82 in mid-October.

Melees erupted all afternoon, including one after the final horn sounded, when Sabres center Dylan Cozens and defenseman Rasmus Dahlin went after Tkachuk.

Earlier in the game, winger Alex Tuch nearly fought Tkachuk, one of the NHL’s supreme agitators, and defenseman Ilya Lyubushkin cross-checked him.

“Lots of signals to me our guys will not settle for not being better than them, than the team across the ice, and I love that,” Granato said. “We are very capable, we’re young, but to see Dahlin and Tuch and guys elevate. It’s just acclimating to another level within the NHL, and our guys are determined to do it. I can’t wait to play that team again. There’s a fire in our guys that burned hotter every moment in that game.”

“That’s the type of hockey he’s going to play,” said Tuch, whose breakaway goal opened the scoring 10:35 into the game. “I knew it. It’s something that he wants to bring to the table and I’d say a lot of us don’t really want to give him the time of day but sometimes you have to stick up for your teammates.”

Tkachuk said some of Saturday’s chaos will remembered for a long time.

“There’s some guys over there I’ll be playing against for the next eight-plus years, especially with some of the stuff that happened at the end that they did, we’ll remember that for a while,” said Tkachuk, who signed an eight-year, $76 million contract in July following the Panthers’ blockbuster trade with the Calgary Flames.

Of course, Tkachuk also infuriates opponents by scoring. He scored 42 goals and 104 points last season, establishing himself as a premier offensive threat.

He gave Florida its first lead after his roughing penalty ended in the first period and earned the primary assist when old friend Brandon Montour’s power-play goal briefly put the Panthers up 4-2 late in the second.

Dahlin responded before the period ended, however, scoring his second goal this season.

While the Sabres did not generate much offense in the third period, they fought to the finish.

“Toward the end of the game, specifically the third period, I love our compete out of our guys,” Granato said. “I mean, our guys played with a chip and they played hard. And I loved that response.”

Granato said the Sabres’ inability to find their “ultra-competitiveness” early hurt them.

“We didn’t initiate enough early, but we started to initiate more as the game went along, we responded, which is key, especially with where were at being as young as we are, regaining an identity and the compete, and I loved that response,” he said. “I thought this was an outstanding, outstanding game two to have with a level this competitive. It showed a lot out of our guys. It’s exactly what we needed. It’s the best way to get better.”

“That was just for myself nice to get in the rhythm, get into a little bit of work,” he said of the early action that helped settle him into the game.”

“Dialed in, competitive again,” he said. “Things didn’t bother him and he plowed through. So a lot of conviction. He played with conviction. That shows experience.”

Comrie registered an assist on Tuch’s goal. He’s the first Sabres goalie to have an assist in his Buffalo debut, according to NHL Stats.

“Before we went out there, he told me to get ready for the puck,” said Girgensons, who wired a shot past goalie Spencer Knight. “So I knew it was coming. It was an amazing play behind the back for him.”

Notes: Granato mixed up some lines and defense pairs, most notably putting Tuch at right wing beside top center Tage Thompson and Jeff Skinner and shifting winger Victor Olofsson to right wing beside Casey Mittelstadt and Jack Quinn. Meanwhile, Granato moved defenseman Henri Jokiharju beside Dahlin and Mattias Samuelsson to the second pair with rookie Owen Power. … Dahlin and Tuch each added an assist. … After drawing 15,364 fans for Thursday’s season-opening 4-1 win over the Ottawa Senators, only 11,481 attended Saturday’s game.