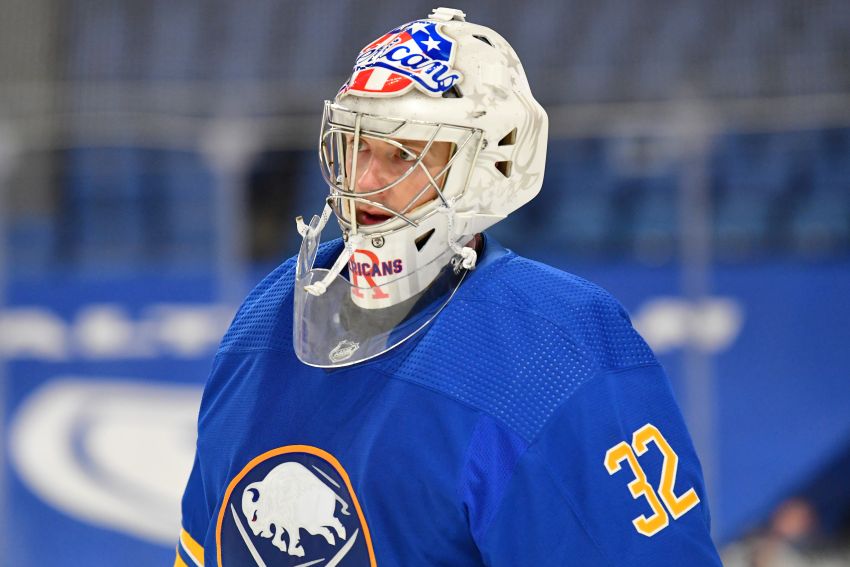 After winning his first two NHL games in Buffalo, Houser, 28, became the league’s feel-good story. A victory before about 20 family members and friends watching inside PPG Paints Arena would’ve made the most incredible week of his career even more special.

But the Sabres offered Houser no help by playing loosely and trying to trade chances with the Penguins, and they ended up getting throttled 8-4.

“We saw our youth and some inexperience because we thought we would be OK to be in a track meet,” interim coach Don Granato said on a Zoom call after the Sabres clinched last place in the NHL for the fourth time in the last eight seasons. “I like our confidence and I like our thought that we could go score, but we didn’t know what we should respect enough, starting with puck management. …

“We should all feel bad for Michael Houser in that regard because we didn’t help him today.”

Winger Drake Caggiula, who scored his first two goals with the Sabres, said he and his teammates owe Houser “big time.”

“The last couple games he’s been a stone wall back there for us,” he said. “It’s been a lot of fun playing for him and we kind of laid an egg tonight for him. He deserves better, we owe him, especially being in his hometown, we got to be better for that.”

The Sabres, who close their trying season Saturday afternoon in Pittsburgh, can start by paying more attention to Penguins center Jeff Carter, who scored four times in Thursday’s romp.

Carter, 36, completed his hat trick 4:36 into the second period, putting the Penguins up 3-2. Still, Caggiula answered less than a minute later, scoring his second of the night.

Then goals by Brian Dumolin and Jared McCann by the 7:25 mark put the game out of reach.

Carter scored his fourth goal 3:02 into the third period, making it 6-3. A player hadn’t scored four goals against the Sabres in one game since Daniel Alfredsson and Martin Havlat each did it in the Ottawa Senators’ 10-4 win on Nov. 2, 2005.

“They’re probably not the team to be trading chances with,” Caggiula said. “I think we got away from our details and what makes us tick in a proper way. I think we just gave up too many opportunities. We were too sloppy with the puck and it allowed them to keep getting Grade A chances, and eventually they’re going to start going in.”

Granato said halfway through the contest his players realized “they couldn’t get the game back.”

“When you allow a team in a game and you allow that team with a bunch of great players to be confident in what they do, it’s really hard to take that back,” he said. “Once the game is underway, you get the fans into it, it’s really hard to take that energy back. So you don’t want to give up goals, especially easy goals, because that other team, their confidence is going to skyrocket.”

Caggiula showcased his growing confidence Thursday, opening the scoring 2:45 into the game by beating Penguins goalie Tristan Jarry from the left wing.

He had scored one goal in 36 games this season entering the night.

“Early in the game I got that little break and it gives you an opportunity to shoot the puck and feel the puck early,” said Caggiula, who was claimed off waivers April 9. “I think a little bit sometimes this year I’ve been too passive. It was a good opportunity for me to just let one rip. There was no other options but to shoot it, and I think that kind of just put my mind in the right mindset.”

“He hasn’t looked like himself yet and he’s starting to look more like himself based on the history I’ve had with him,” said Granato, who coached Caggiula with the Chicago Blackhawks.