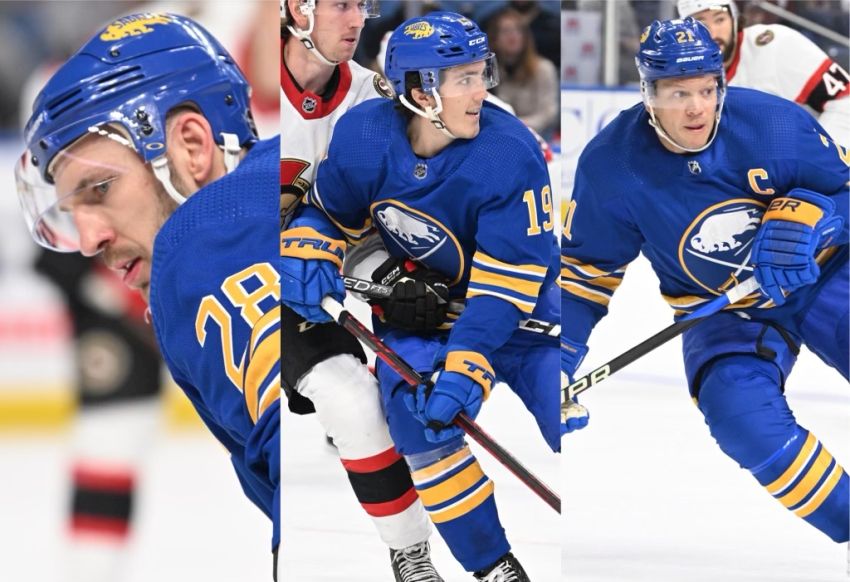 BUFFALO – In the second period of Thursday’s 6-3 win, Sabres center Peyton Krebs zoomed into the Detroit zone to chase down a loose puck and drove Red Wings defenseman Moritz Seider into the boards behind the net.

Krebs, 21, has the highest skill level of the three. But having played just 88 NHL games, he’s still a neophyte. Meanwhile, Girgensons, 28, and Okposo, 34, are the two longest-tenured Sabres.

While the wingers possess talent, there’s nothing fancy about their game. They aggressively move up and down ice and try to win puck battles.

“We all know what we’re going to do, each and every one of us,” Krebs said Friday in KeyBank Center. “I think we have a good mix. Gussy’s got a lot of speed, wins his battles. Okie’s the same thing, he can shoot the puck. Myself, I just try to win my 50-50 battles and make plays to allow them to get into those areas to score.”

The respected veterans’ style has rubbed off on Krebs, buoying his development since he moved between them earlier this month.

“(Krebs is) committed to find ways to add to his game,” said coach Don Granato, whose Sabres begin a three-game road trip this afternoon against the Boston Bruins. “And then you place those two guys on his wings, Okposo and Girgensons, and they play a very direct, straightforward game. And where Krebsy was more lateral movement and looking for lateral plays, they are forcing him to look forward.”

Prior to pivoting Girgensons and Okposo, Granato said Krebs, a healthy scratch four times last month, would jump over the boards and say, “How do I score a goal?”

“If you get 15 shifts in a game, you’re not going to score 15 goals,” he said. “So it’s really not a good idea to jump over and say, ‘I’m going to try to score a goal right now.’ You don’t read the play that needs to be made. And he’s doing that much, much better. Been very consistent. You’ve seen growth because of that stability.”

He added: “His skill in those other areas hasn’t gone away. It’s going to come back and be way more noticeable now because he’s going to have a greater foundation.”

Girgensons, an alternate captain, has been a part of the Sabres’ foundation since 2013-14. For the first eight years of his career, he endured near-constant turmoil, never sniffing the playoffs while the team burned through three general managers and six coaches.

But at the beginning of last season, when the Latvian returned from a hamstring injury that sidelined him all of 2020-21, he expressed confidence the Sabres’ latest rebuild would work.

Today, the Sabres stand at 17-14-2, are averaging a league-high four goals a game, and are contending for their first postseason berth since 2011.

“We have improved every day as a team,” Girgensons said. “The potential that maybe I saw back then probably is higher now than maybe before then.”

Girgensons said he has never had more fun coming to the rink.

“It’s been great,” he said. “This group we have is amazing. … Every guy is expecting to win every game.”

That, of course, wasn’t always the case. Over the past season and a half, however, as the Sabres added and developed more talent, Girgensons and Okposo have emerged as the young team’s undisputed leaders.

Their actions and words helped set a tone.

“I’m trying to set an example for playing the right way, and we were able to get rewarded tonight,” Okposo said following the game. “And nobody does a better job at that than 28 (Girgensons). The way that he plays every night you know exactly what you’re getting.

“Krebsy’s come a long way, too. He’s really playing well, he’s found his stride. He’s making plays out there but he’s really working. And kudos to him after a tough stretch there he’s really turned it around.”

Notes: The Bruins, whose 59 points rank first overall, are on pace to have one of the greatest regular seasons in NHL history. They’re 28-4-3 overall and 18-0-2 at home. … Bruins goalie Linus Ullmark, who left the Sabres in free agency in 2021, has quickly become the favorite to win his first Vezina Trophy. The Swede has compiled a 20-1-1 record with a 1.90 goals-against average and a .938 save percentage in 24 games. … The Sabres, who are 6-1-0 in their last seven road games, practiced on Friday at LECOM Harborcenter before flying to Boston.