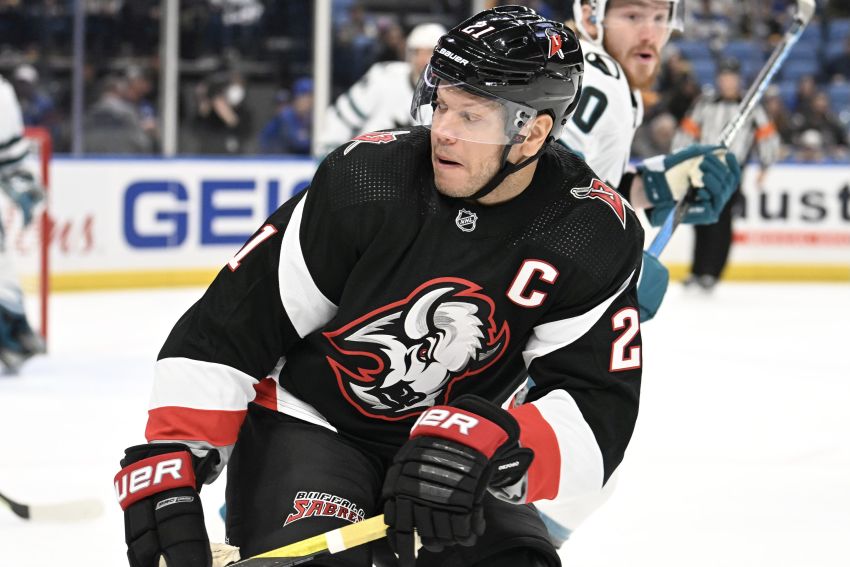 Okposo, the Sabres’ heart and soul, has embedded himself and his family in the community, Granato said, making his year-round home here.

“This is life and lots of people in life and death situations, lots of families, too many lost loved ones, too many felt the pain of this storm that went through, and to have a guy like Okie that loves this community score three I felt was appropriate,” he said.

Okposo, 34, understands the unique bond the Sabres and their rabid fan base share. The veteran winger knows he and his teammates play for more than themselves and how hockey can help the community heal.

On Thursday, the Sabres played before just their second sellout of 19,070 fans this season. Okposo, who doubled his season goal output in one night, felt a buzz in KeyBank Center before the game started.

The Sabres hadn’t played since Dec. 19 or even practiced in a week because of storm postponements and Christmas break. Still, they pounced on Detroit, opening up a 5-0 lead by the second period before earning their fifth consecutive win, their longest streak since a 10-game run in 2018.

Okposo scored 11:21 into the second period and again at 14:02 before his third empty-net goal this season completed his third career hat trick and first since Feb. 7, 2016, when he played for the New York Islanders.

“Special night, for sure,” Okposo said. “The atmosphere was incredible and right from warm-ups. First period we were buzzing, and it just felt good to play a game at home and after everything that happened this weekend. All the lives lost, all the families that had to go through what they did, the first responders to all the people with plows and snowmobiles.

“To do it in front of such a big crowd, too, I think really shows he’s our guy and he’s our leader,” he said.

The Sabres, the NHL’s highest-scoring team, picked up where they left off 10 days ago. Despite just having just a short pregame skate to prepare after they reconvened Thursday morning, they looked sharp.

“It was almost business as usual,” Okposo said. “We were thinking there might be a little bit of rust, but we were sharp this morning and we were sharp to start the period. I don’t think there were many mishandles or bobbles and things that can happen after the break. Maybe a little fatigue in the third and we kind of sat back on our heels a little bit and that might be a product of not playing a game in a while, but I thought overall we did a pretty good job tonight.”

Mittelstadt, who opened the scoring in the first period and tallied again in the second, said the enthusiastic crowd boosted the Sabres all night.

“Everyone was feeding off the energy,” he said.

Granato said he and his coaching staff minimized their strategy heading into the game knowing the crowd would be huge.

“The passion our guys have for being a Buffalo Sabre, being in our community … I could sense that energy,” he said.

Other than Skinner, all of the Sabres’ offense came from the second, third and fourth lines, illustrating their depth. Center Tage Thompson and winger Alex Tuch were held pointless.

“It’s significant,” Granato said of the depth. “Thompson, Tuch and Skinner, I thought their work ethic and their commitment and their focus was incredible. Nine days between games, I thought they weren’t as sharp, maybe, and … they worked, they did the right things, they played the right way.”

Sabres goalie Ukko-Pekka Luukkonen made 28 saves, including 14 in the third period.