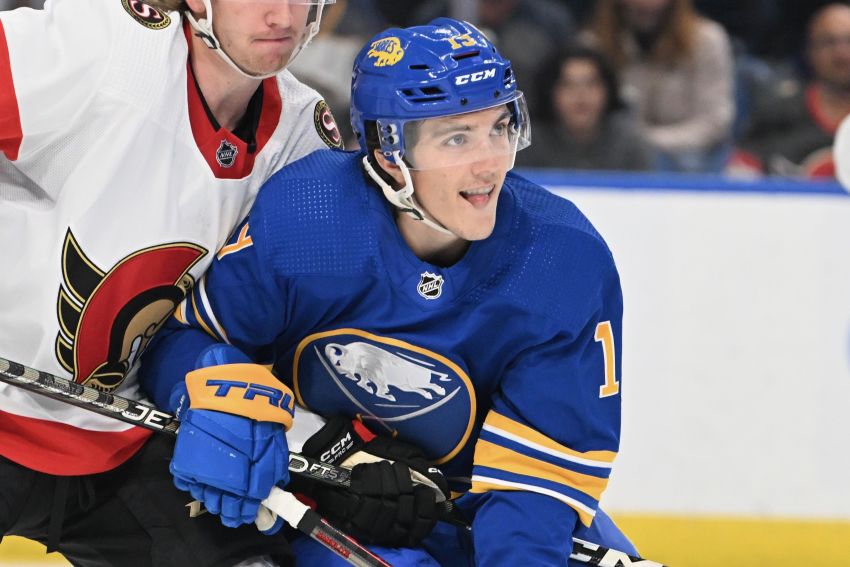 BUFFALO – When the Sabres scratched Peyton Krebs four out of five games late last month, Tage Thompson texted his teammate one night and reminded him of what he experienced not long ago.

By now, Thompson’s story is well known. The center struggled for years to make a mark. Less than two seasons ago, he was a healthy scratch. Today, of course, he’s one of the NHL’s most prolific goal scorers.

“When he was my age, he was in a similar situation and he just kept at it and look where he is now,” Krebs said prior to Friday’s 4-3 overtime loss to the Pittsburgh Penguins at KeyBank Center. “So having guys like that to lean on is huge. As long you know you’re working hard and you’re sticking with it, things are going to turn around.”

He has stood out since returning to the lineup Dec. 1, mostly between Zemgus Girgensons and captain Kyle Okposo on the third line. The trio generated a team-high 72.3 percent Corsi For in Wednesday’s 9-4 road win over the Columbus Blue Jackets, according to NaturalStatTrick.com.

He tailed Patrik Laine into the Columbus zone, forcing him to cough up the puck. After he grabbed it near the left circle, he aggressively cut to the net, undressed a defender and backhanded the puck in.

“His confidence had been growing before the goal and the goal was just a result, but (it was) definitely an injection of adrenaline and more energy,” Granato said. “… It’s something that he is working to add to his game, getting off of the perimeter and to the net more.”

Krebs, who ended a 32-game goal drought dating back to April 1, said he felt he was close to scoring.

“That goal was really nice, but I think these past few games, not just the goal, I’ve started to feel connected with my linemates, feel a lot better out there,” said Krebs, who has compiled four points in 20 games this season. “So I think it was just a buildup of it and sticking with it. I knew one of those was going to go in eventually.”

Krebs, having registered four shots on goal in his first three games back, has been shooting the puck more often. While that’s not a high number, consider he only mustered five shots in his previous nine outings.

He tried to embrace being scratched, using the extra time as an opportunity. Granato often explains how during the grind of a long season, players don’t have time to step back and reflect. That’s usually done in the summer and often buoys improvement.

“Peyton has used every day to become better,” Granato said. “His attention and focus has been on getting better. I think before, prior to this struggle, it was on results. I’m not getting results, I should feel shame, I should feel terrible, what’s wrong with me, I’m not getting results. Nothing wrong with you, you’re … 21 years old coming to the NHL.”

Krebs recently saw Thompson, 25, heading on the ice early and asked if he could join him.

“That just speaks to the kind of player he is and the person,” Thompson said of Krebs coming out with him. “He just wants to get better. He’s got that hunger. It’s great to see. And I think because he thinks the game so well and he’s got the skill, I think when you have a work ethic like that, I’ve said it before, it’s not of if, it’s just when. It’s going to come out.”

He added: “There’s not one path that everyone has. It’s different for everybody. As long as he continues to work and doesn’t lose that, he’s going to be fine.”

The Sabres face the Penguins again Saturday in Pittsburgh, completing their only back-to-back set this season.

“If there’s anything there’s some excitement being a two-game set,” Granato said. “Our guys liked it. I think the playing and coaching advantage of it is you can make adjustments and then on the coaching side you see the ability to adjust or the ability to get the right adjustments targeted, target the right adjustments. There is a benefit to it for those reasons. To play this team in particular is awesome. It’s an opportunity, is what it is.”

The Sabres made one lineup change against the Penguins, inserting defenseman Casey Fitzgerald for Lawrence Pilut.

Krebs hounds Laine to turn over the puck, turn a defender inside out, and scores. 8-2 #LetsGoBuffalo #CBJ pic.twitter.com/Ujfbgzhsrq