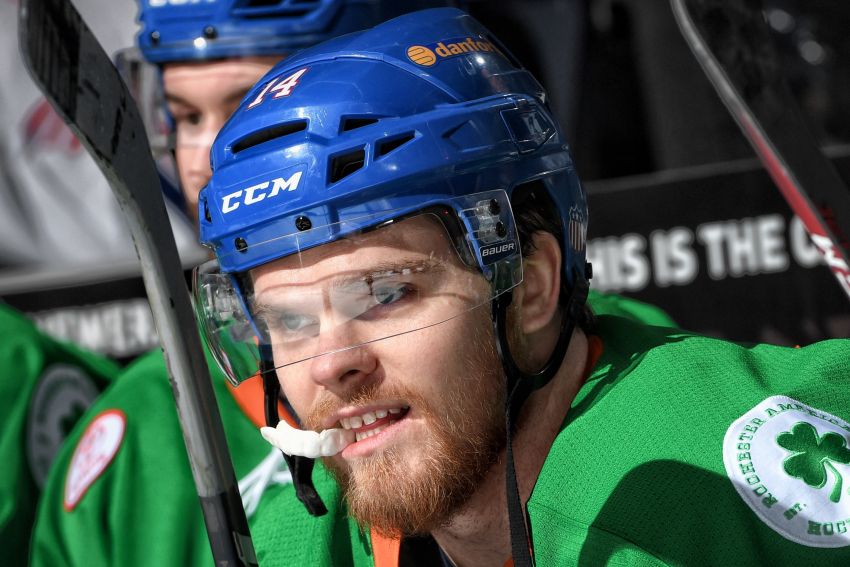 So instead of competing for a spot on the big club, Malone, 24, didn’t play his first game until Nov. 7 with the Rochester Americans.

Injuries limited Malone to only 38 appearances during a frustrating campaign. The Harvard product never seemed to find a groove, scoring four goals and 13 points and occasionally sitting out games while healthy.

Still, Malone, who wasn’t given a qualifying offer by the Sabres, will return to the organization next season.

The Amerks have signed Malone to a one-year AHL contract, the team announced Tuesday.

Malone played one contest with the Sabres late in 2016-17 after signing his entry-level contract. The Sabres drafted him in the sixth round in 2013, 159th overall.

NHL teams had until Tuesday to extend qualifying offers.

Cornel, 23, was the only Amerk to play all 76 regular-season games last season. He was, however, a healthy scratch for two of the team’s three playoff games.

Forty prospects, including first-round picks Dylan Cozens and Ryan Johnson, are on the development camp roster the Sabres released Tuesday.

The first session is this afternoon inside Harborcenter.

All six of the Sabres’ six 2019 draft picks are listed. So are four players who spent time in Buffalo last season: wingers Victor Olofsson and Tage Thompson and defensemen Will Borgen and Lawrence Pilut.

Finnish center Arttu Ruotsalainen, who inked a three-year, entry-level contract in May, is also listed.

The Sabres introduced Cozens and Johnson to the media Tuesday at KeyBank Center.

“Just getting a tour of the dressing room and everything and being in the city, just walking around and people recognizing me, it’s pretty cool,” said Cozens, a native of Whitehorse, Yukon. “It’s definitely setting in that I’m starting to live my NHL dream.”

Just days after the draft, it seems like the entire territory in northwestern Canada might adopt the Sabres as their favorite NHL team.

Cozens would be the fourth Yukon native to play in the NHL.

Cozens is listed as No. 79 on the roster.

Bailey, a Williamsville native, played 11 games with the Flyers after the Sabres traded him Jan. 17.

Clendening, 26, played seven playoff games with the Blue Jackets after appearing in only four regular-season contests.

He spent the bulk of the season with the Cleveland Monsters, compiling four goals and 37 points in 44 AHL outings.