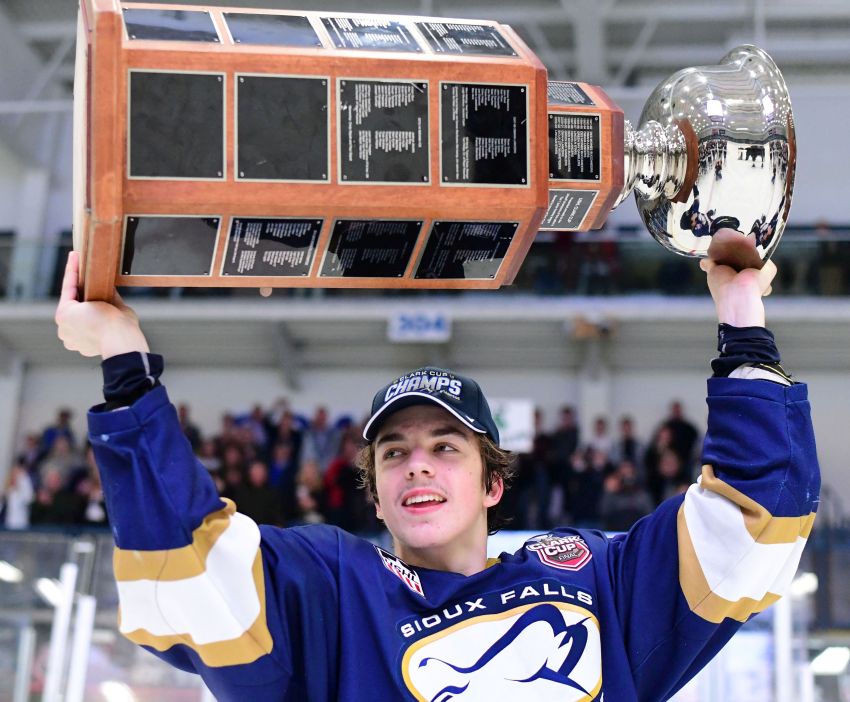 BUFFALO – For 11 years, Craig Johnson coached his son, Ryan, staying with the youngster from his first strides on the ice through high school.

So when Ryan, the 31st overall pick by the Sabres on Friday, left California for the junior Sioux Falls Stampede last year, it marked the first time he had been away from his father, who played 557 games as an NHL forward.

“It wasn’t hard to let him go,” Craig Johnson told the Times Herald. “It was hard in that, I guess, I enjoyed it so much. It was time that we got to travel together, we got to ride in the car together. I got to see him quite a bit.

“So when that’s kind of taken away and that’s been a part of your life for so long, that was the hard part. But he was ready to go, he knew he had to go. He grew up a lot as a person and as a hockey player as well this year.”

His performance during the Clark Cup playoffs – his coach, Scott Owens, called it “elite” – only improved his NHL Draft stock.

Those games possibly helped elevate Johnson to a first-rounder.

As the opening picks went by in Vancouver, Craig Johnson, a development coach with Los Angeles, left the Kings’ suite inside Rogers Arena and joined Ryan and his family in the stands.

Then with the final pick of the round, the Sabres grabbed Johnson.

“We were shocked when we heard ‘Sioux Falls,’ and all of sudden it kind of set in, just seeing him walk down the stage,” Craig Johnson said. “Just to tell him how proud I was of him and how much we love him, it was really a special moment.”

Ryan Johnson said his father taught him “everything I know.”

“He’s been with me every step of the way just kind of guiding me and always offering advice,” said Johnson, who will play college next season at Minnesota, where his father spent three years.

Growing up in Irvine, about 40 miles outside Los Angeles, had its perks for Ryan Johnson. His teammate Jackson Niedermayer’s father, Scott Niedermayer, a Hall of Fame defenseman, would occasionally stop by the rink and help out.

“When he was there, gaining advice from somebody like him was something you can’t beat,” said Craig Johnson, who played for the Kings, Anaheim Ducks and three other NHL teams.

So what kind of prospect do the Sabres possess in the 6-foot, 170-pound Johnson, who compiled six goals and 25 points in 54 games last season?

“I don’t want to pigeonhole him and categorize him,” Owens said. “I’ll just tell you this, that as far as his skating ability to break the puck out, his passing, is elite. His ability to get to the puck in the D-zone and get it moved to the right people is effortless.”

Owens said Johnson is a “transition defenseman that can contribute offense.”

“He turned into a really, really good defender, because his feet are so good,” he said. “He could always get his body under his feet and get them in the right position to defend.”

Johnson’s offense, according to Owens, will “come in another year or two.”

“Offensively, there’s a lot of room,” he said. “That’s where there’s the most growth and potential.”

“He skates extremely well, he moves the puck extremely well, he defends with his brain,” he said. “He’s not overly rugged but he does have this little sense of grit every now and then, and that showed in the playoffs this year. He had a great playoff for the Clark Cup champions in the USHL, which shows that he’s a winner and he’s a gamer.

“So I like the well-roundedness of him. From an offensive standpoint, we think that can still come. But even if it doesn’t, we know we’ve got a new-age defenseman that can move the puck and skate.”

“I think that’s the thing that made him a late first-round pick without having a lot, a lot of points,” he said.