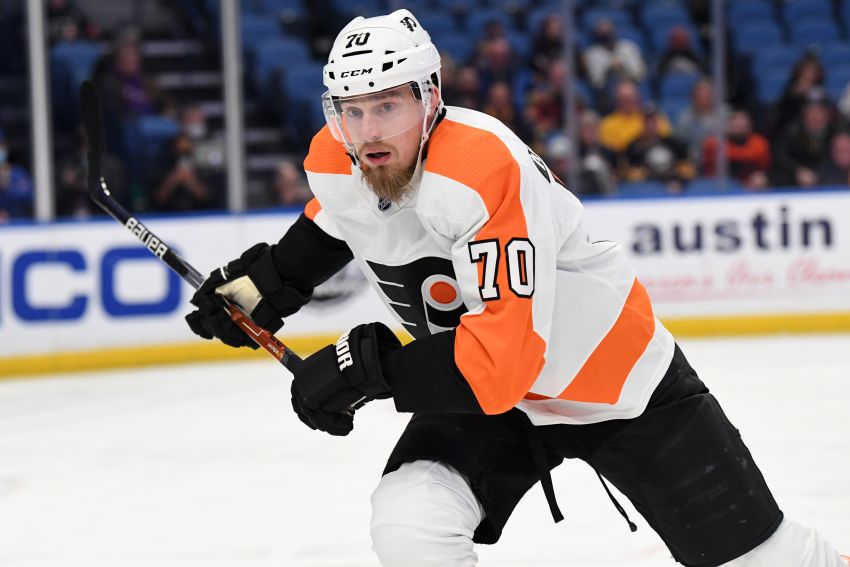 Rasmus Ristolainen is in his first season in Philadelphia. ©2022, Micheline Veluvolu

BUFFALO – In his first nine seasons, ex-Sabres defenseman Rasmus Ristolainen has endured more chaos and losing than any NHL player.

When the Sabres traded Ristolainen to the Philadelphia Flyers on July 23, it appeared he might finally have an opportunity to play for a contender and experience postseason hockey.

Instead, the Finn joined a team that has fired its coach and endured two winless skids of at least 10 games this season.

After winning five out of six games in December, Saturday’s 6-3 loss to the Sabres at KeyBank Center was the Flyers’ 11th straight setback (0-8-3).

“We are not where we want to be as a team, but still kind of for me personally it’s been exciting,” Ristolainen said prior to scoring a goal in his first game against the Sabres as an opponent. “Everything is new, all the people, city stuff, everything. I’ve really enjoyed being with the Flyers and Philly. It’s been good.”

Following an 8-4-2 start this season, the Flyers have endured a rough two months. They fired Alain Vigneault on Dec. 6 during their first 10-game winless streak and replaced him with interim coach Mike Yeo.

Ristolainen has played a different role in Philadelphia, skating on the second pair and earning more five-on-five ice time. He doesn’t play on the power play.

Saturday’s goal was just the Finn’s second this season and his 10th point.

Perhaps Ristolainen will receive a larger role somewhere else this season. The Flyers are so far out of the playoff chase they will likely try to deal him before the deadline and recoup some of the hefty cost they paid the Sabres.

As a rental player, Ristolainen, who can become an unrestricted free agent following the season, would be coveted.

“I haven’t thought about it once,” Ristolainen said of getting traded again. “There’s other things I can control and there’s stuff I can’t control. I’m not really worrying. I’m just here to try to help the Flyers turn this around. I believe in the guys.”

By last season, it became apparent Ristolainen, who played 542 games for the Sabres, would be moved before he began the final season of his contract. The Sabres, having just finished last again, started rebuilding and trading their core players.

“The core was here for a while and things didn’t work out, so you got to make some change and moves,” Ristolainen said. “We were the people that got traded, and it’s part of the business and things happen.”

Hours before the NHL Draft started, the Sabres dealt him to the Flyers in exchange for a first-round pick they used to select forward Isak Rosen, a second-round pick in 2023 and defenseman Robert Hagg.

“It was time for me to see something new, and, obviously, first there was a little bit sadness, but then, obviously, I think it was good for me to go somewhere else,” Ristolainen said. “I liked being in Buffalo. I liked living here, I liked the fans, they were great.

“So, obviously, some good memories, but I’m here to play hockey and the hockey part, it was tough. Personally, I couldn’t do enough and the team, we weren’t even close to making the playoffs.”

“I know even after the trade he said, ‘I still have my house here, I’m not selling it,’” Granato said. “He loved being here. You can tell that. I could tell that in his voice and how he talks.”

Ristolainen looked at the Sabres’ lineup before the game and saw a lot of new names.

“The closest guys to me, they’re not playing tonight, so I wish Zemgus (Girgensons) and Kyle (Okposo) were out there,” Ristolainen said.

Ristolainen received a warm ovation and acknowledged the crowd when the Sabres welcomed him back early in the game.

The Sabres drafted Flyers winger Max Willman, who has played his first 22 NHL games this season, in the fifth round in 2014, 121st overall.

Willman played five years of college hockey – four at Brown and one at Boston University – before turning pro. The Sabres never signed him.

Notes: The Sabres scored four goals in the first period Saturday for the first time since Dec. 2, 2019. … Centers Peyton Krebs and Tage Thompson and winger Jeff Skinner each scored two goals, marking the first time the Sabres had three players score at least twice in a game since March 19, 2008. … Defenseman Rasmus Dahlin recorded two assists and has nine points (one goal and eights assists) in his last six home contests. … Winger Alex Tuch registered two assistant and has 10 points (three goals and seven assists) in his first nine games with the Sabres.