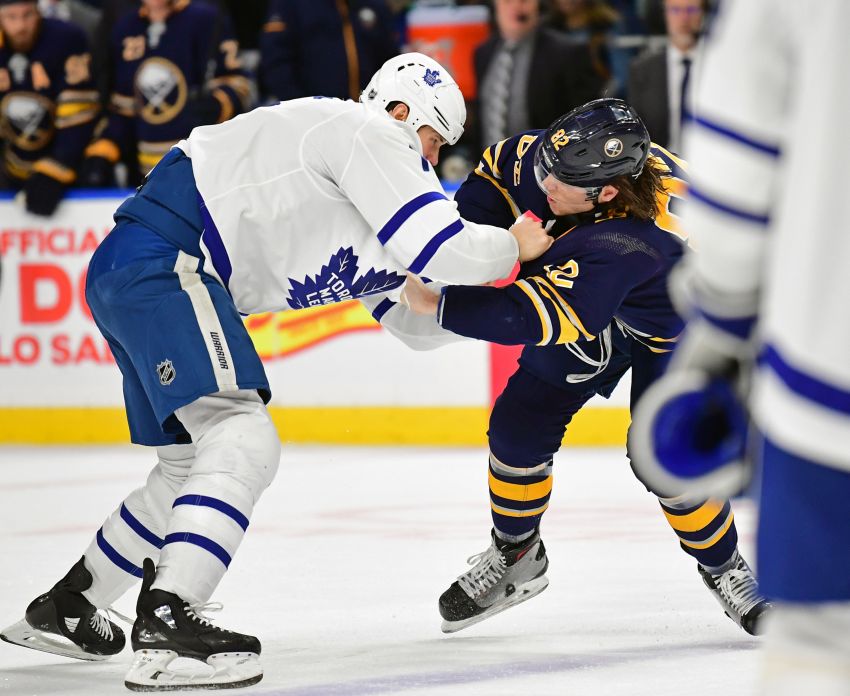 BUFFALO – Defenseman Nathan Beaulieu’s decision to challenge one of the NHL’s toughest customers had the desired effect for the reeling Sabres.

With the Sabres down 2-0 just minutes into Thursday’s 5-2 loss, Beaulieu picked a fight with Toronto Maple Leafs heavyweight Matt Martin.

“Sometimes it’s just something you need to do,” Beaulieu said. “A lot of respect over there to give me that opportunity. He’s a tough customer. Just trying to wake the boys up, get them going.”

Beaulieu’s scrap – he held his own against an opponent an inch taller and 20 pounds heavier – sparked the Sabres, who hadn’t played since Saturday afternoon.

“That’s huge,” Sabres goalie Robin Lehner said. “A lot of credit it him, against a big tough guy, too.”

Sabres coach Phil Housley said: “It really got the bench going. Nate did a really good job, stepping up like that, just trying to create some energy and some momentum for us.”

The Sabres drew a penalty three seconds after Beaulieu’s fight. Then winger Sam Reinhart scored, his 18th goal this season, one more than he had all of last season in nine fewer games.

Still, while the Sabres, the NHL’s worst team, got on track a bit, it wasn’t enough against the playoff-bound Leafs before a bipartisan capacity crowd of 19,070.

“In this league, if you get down by a couple against a good team early on, it’s tough to fight your way back,” Beaulieu said. “The second and third we played a lot better.”

The Sabres fell behind 4-1 before Sabres winger Jason Pominville scored on the power play late in the second period.

That wretched start helped doom them.

“We’ve been off for a long time,” Beaulieu said. “It just didn’t seem like we were into it right away.”

Of course, an early save would’ve boosted the Sabres.

Had Linus Ullmark not been tending to a personal matter Thursday, the Sabres likely would’ve started the goalie.

With their netminder of the future unavailable, the Sabres turned to Lehner, their regular starter. At times this trying season, the Swede has been their backbone, even their only bright spot some nights.

Lehner struggled early in a rare Sabres home loss to their top rival, setting a bad tone by letting James van Riemsdyk score from below the goal line just 3:39 into the contest.

“They got an unfortunate one,” Lehner said of the goal.

Teammate Jacob Josefson knocked Lehner’s stick out of his hand on the play. Lehner also said there was “questionable goalie interference.”

“Their guy pushes (Josefson) in,” Lehner said. “I have the post, I’m sitting there waiting, he rotates me out of position. Stuff like that happens.”

Van Riemsdyk scored again from the slot at 6:39, his fifth goal in two nights and 31st overall.

“It looked like we were off five days,” Housley said. “I didn’t think we were anticipating how fast they were going to come out.”

Connor Carrick’s long goal from the point 6:22 into the second period ultimately cooked the Sabres.

The Leafs won for the fifth time in their last 24 visits to KeyBank Center.

One bright spot for the Sabres? Reinhart continued his career-best stretch.

With No. 1 center Jack Eichel out with a high right ankle sprain, Reinhart has morphed into perhaps the Sabres’ best offensive threat. He has scored seven goals and 12 points in 14 games since Eichel was injured.

Following a downright awful start to his third NHL campaign, Reinhart has compiled 13 goals and 28 points in the last 32 contests.