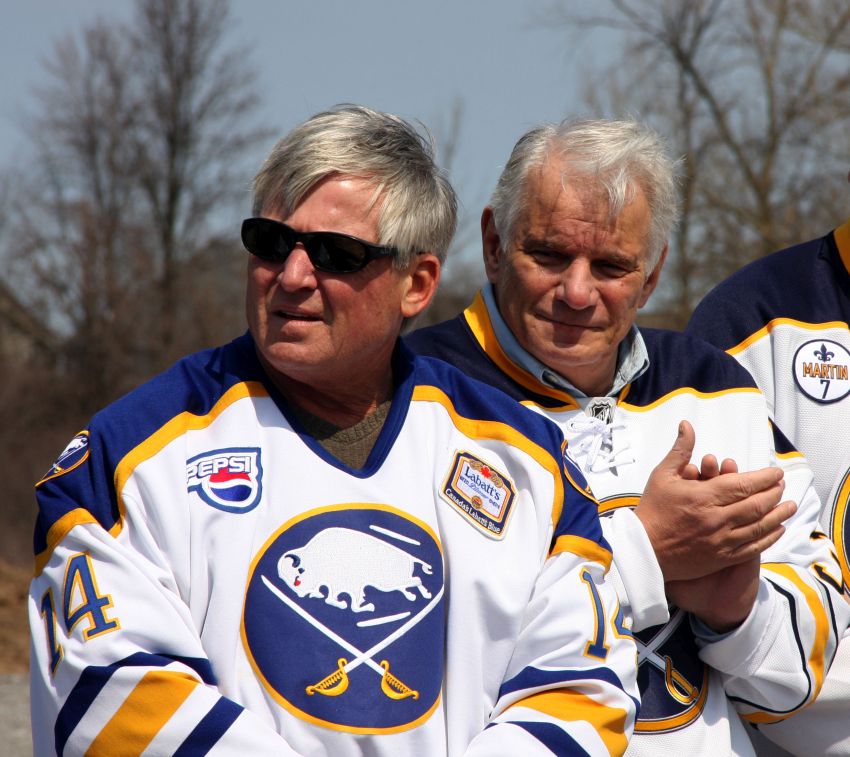 Rene Robert (14) earned the respect of teammates like Mike Robitaille (clapping) during his career in Buffalo. ©2021, Janet Schultz

When Mike Robitaille caught up with Rene Robert last year, he was struck by how well his old friend and Buffalo Sabres teammate looked.

Robert, who was approaching his 72nd birthday, had a trim physique and a full head of hair. Robitaille saw the same man he had played with almost 50 years earlier.

“Looked like a young Rene to me, just kind of bouncing along and feeling good,” Robitaille told the Times Herald on Wednesday.

Robert’s passing caused Rick Dudley to reflect. Dudley played with Robert during both of his stints with the Sabres and is one month younger than his friend.

“He was a vital sort of guy, and it’s tough when you lose somebody you remember as a great athlete and a friend,” Dudley said. “To me, he didn’t seem old. Rene Robert did not seem old to me. There are people that are 70-plus and they seem old to you. He wasn’t one of them. He seemed young to me.”

Robert’s exploits as a young man are seared into the memory of his ex-teammates. He arrived in Buffalo late in the 1971-72 season as an unknown 23-year-old. The Sabres were his third NHL team in less than two seasons.

Suddenly, everything clicked, and Robert quickly morphed into a star. He earned a spot at right wing beside center Gilbert Perreault and left wing Rick Martin, and the “French Connection,” which would become perhaps the greatest line in hockey history, was born.

Robert simply needed a chance to showcase his talents.

“You bounce around and you believe in yourself, but it doesn’t seem anyone else believes in you as a player,” said Sabres Hall of Famer Don Luce, who played with Robert in Buffalo and later with the Toronto Maple Leafs. “But you know in your heart you can do it, you just need the opportunity.”

Robitaille said Robert “was the missing piece of the puzzle” the Sabres needed to play beside Perreault and Martin, two established young stars.

Of course, Robert, who recorded the franchise’s first 100-point season in 1974-75, is remembered as a scorer. But he excelled all over the ice.

“Rene, he was very comfortable with the line, he … was exceptionally good defensively and he covered for the other two guys to really let it all out offensively, and they would,” Robitaille said. “Rene could always pick them up defensively.”

“He understood how to play the game technically, he was a complete hockey player, knew the game well, understood the science of the game,” he said.

Dudley said Robert “could do it all.”

“He even had an element of toughness, he was mean,” he said. “People kind of left him alone, because he had a little nasty to him.”

Robert used his early struggles as motivation. When the Sabres erected a statue of the “French Connection” in 2012 outside KeyBank Center, Luce said he called Robert to tell him something was missing – the chip on his shoulder. The friends enjoyed a laugh.

After the Sabres traded Robert to the Colorado Rockies in 1979, they kept issuing the No. 14, giving it to six more players. Dave Hannan couldn’t wait to grab the digits when he joined the Sabres late in the 1991-92 season.

“I was very superstitious about numbers because I wore 14 since I was 10 years old,” Hannan said.

Hannan loved the number. He started sporting No. 4 as a child for defenseman Bobby Orr, his idol, and added a “1” when he moved up to forward from defense.

“I always had in the back of my mind, no matter where I went, it was a number I really liked,” Hannan said.

But No. 14 was taken when Hannan played for the Pittsburgh Penguins, Edmonton Oilers and Toronto Maple Leafs.

In Buffalo, Hannan wore No. 14 through the 1994-95 season. When the Sabres decided to retire Robert’s jersey beside Perreault’s No. 11 and Martin’s No. 7 in 1995, the team told Hannan he needed to choose a new number.

“Being superstitious, it threw me for a loop,” he said.

Still, Hannan had no problem changing. He grew up watching the “French Connection” on television and enjoyed when the players would visit Buffalo’s dressing room inside Memorial Auditorium.

“It wasn’t hard to give it up for someone of his caliber,” Hannan said. “I thought of the organization before, how he built it when they first started.”

Hannan briefly switched to No. 17 before settling on No. 41. When Hannan ran into Robert, the legend mentioned the old number.

“We talked, he said, ‘Hey, I know you have to give up your number,’ and I said, ‘Listen, you’re a (Sabres) Hall of Famer, you’re a big part of Buffalo,’” Hannan said. “I was honored to wear it, and … I was just sort of taken aback that he would even mention it, you know what I mean? … He was a special guy.”