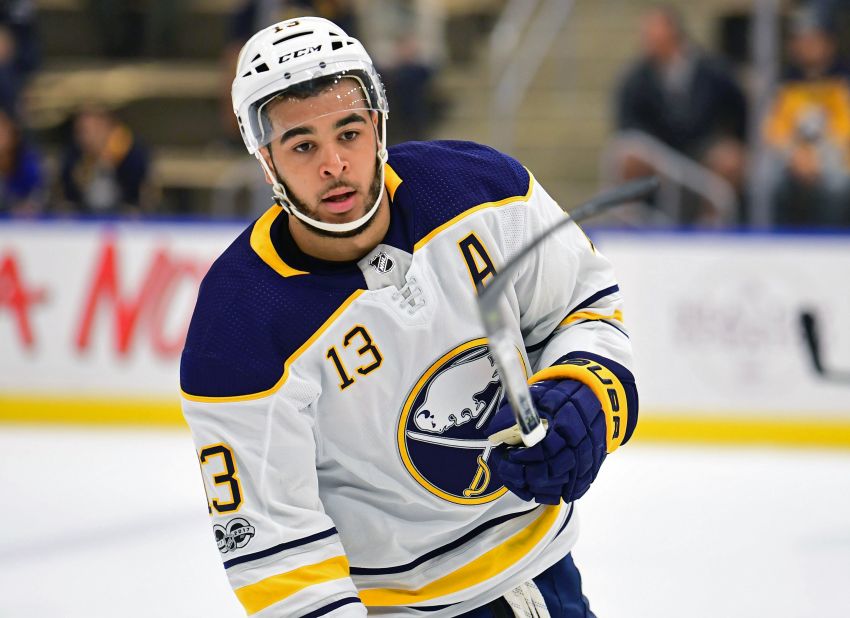 Finally, Baptiste, who potted 25 goals in 59 AHL contests last season, scored in his sixth game. The winger followed up by scoring twice in the final 2:25 of the Rochester Americans’ 4-3 come-from-behind overtime win against the Laval Rocket on Oct. 27.

“(I) simplified my game a little bit, just got to playing well defensively and using my speed and being physical,” Baptiste said this afternoon inside KeyBank Center. “I knew the offense would come eventually. It certainly did in those two games.”

Those games caught the Sabres’ attention, and they recalled Baptiste last week before their two-game road trip. Still, they scratched the third-year pro for both contests.

Baptiste should make his NHL season debut in Tuesday’s home tilt against Washington. The former third-round pick practiced at right wing beside center Sam Reinhart and Seth Griffith this morning inside HarborCenter.

Officially, Sabres coach Phil Housley said Baptiste’s status will be decided before the game. Matt Moulson, however, practiced as the extra forward today.

Baptiste played 14 games with the Sabres last season, recording three goals and four points. He’s a natural scorer with the Amerks. In the big league, though, he must adjust.

“I try to play 200 feet wherever I am,” Baptiste said. “Obviously, if I’m in Rochester, I’m going to play significantly more minutes to start off with. Here, I might not play that 20 minutes a night when I get up here. I got to be prepared to do the little things right.”

Baptiste did the little things against Laval, scoring his goals in close.

Housley said: “He’s been doing really well going to the net hard, he’s been scoring goals. That’s what we need more of. I just like the pace he brought today.”

Other injury updates from Housley:

– Defenseman Zach Bogosian, out all season with a lower-body injury, has skated the past two or three days and is day-to-day.

– Minute-munching defenseman Rasmus Ristolainen is day-to-day with an upper-body injury.

– Winger Justin Bailey is day-to-day with a lower-body injury.

– Forward Evan Rodrigues, out all season with a hand injury, has been skating and is day-to-day.

– Center Jacob Josefson is still week-to-week with a lower-body injury.

Tuesday update: The Sabres have recalled defenseman Zach Redmond from the Amerks and placed Bailey on injured reserve.