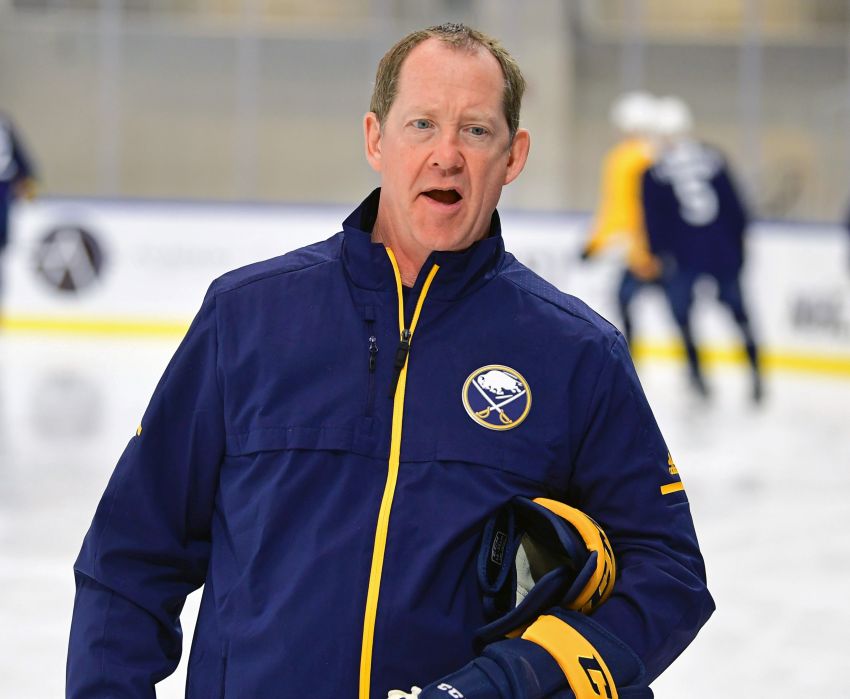 BUFFALO – Instead of tearing into the Sabres following Saturday’s embarrassing 5-1 loss in Dallas, to the shock of some observers, coach Phil Housley praised his struggling team.

“When I evaluate the game, I think we played well,” Housley told reporters. “The score tells you differently and there’s probably going to be a lot of people that disagree with me. But I think we got the start that we wanted.”

The start we wanted? The Stars pounced on the Sabres, opening up a 2-0 lead barely seven minutes into the contest and a 4-0 advantage by the 13-minute mark.

Housley also acknowledged “bad bounces” and touched on some deficiencies in the Sabres’ 10th loss in 14 outings.

Naturally, his quote raised some eyebrows. How can a coach whose team just got shellacked by four goals say his players performed well? Housley didn’t want to elaborate when he was pressed on that Monday inside KeyBank Center.

“That game’s behind us,” he said after the Sabres prepared for tonight’s home tilt against the Washington Capitals.

But Housley’s words in Dallas illustrate his early approach to discussing the Sabres publicly. No, the rookie coach isn’t exactly Pollyanna. He has been critical at times during a rough opening month and will often talk about problems in depth.

Still, he clearly tries to inject some positivity, especially in bad times. He has even talked glowingly of some players who appear to be struggling.

Of course, away from the media, Housley deals with the Sabres much differently. The Hall of Fame defenseman can be loud during practices, expecting his team to execute drills with pace and purpose. In the dressing room and one-on-one, players have said Housley is honest and direct.

“He’s played the game,” Sabres winger Jason Pominville said. “Negativity usually’s not good for anyone. But at the same time, when the doors are closed, he’s able to hold us accountable for things that we do or don’t do well. He has the fine line of knowing when it’s time to do it, how to do it.”

Housley said he tends to “look at things in a different perspective.”

“Just as a former player and now a coach, it’s easier to be a master of the obvious and really hammer the nail,” Housley said. “I like to put them in a position to succeed. … We’re still going to hold the players accountable, believe me. I think the message today was pretty strong in our meetings of doing the right things, playing the right way.”

“When things aren’t going well, sometimes to keep beating that horse is not the way to go,” Okposo said. “You got to be a bit complimentary – not showering guys with compliments, because we don’t deserve it right now – (because) keeping the guys positive and keeping everybody upbeat is, I think, important.”

Pominville said players like that Housley has their backs.

“We have his back and we’re all working toward the same goal, same direction,” he said. “I think he understands … being upbeat is the way to do it, and he’s an upbeat guy, he’s an honest guy.

Even with 4-8-2 record – only the Arizona Coyotes have fewer wins – Housley and his staff have created a different atmosphere this season, Okposo said.

“We’re trying to really do things the right way,” he said. “We got a long way to go in that regard. We have to make sure that our games are all in sync and we’re all doing everything that the coaches want us to. If we don’t, then our whole game gets thrown off.”

Housley and Sabres general manager Jason Botterill seem intent on fostering a greater sense of team. At the end of each practice, Housley huddles the Sabres up, says a few words and has them put a hand in and shout something in unison.

The huge photos of each player that adorned the wall above every locker for years have been removed. So far, only a group picture from a team outing and a photo celebrating the Sabres’ first win Oct. 15 in Anaheim have been hung.

One thought on “Phil Housley complimentary, critical of Sabres in opening month”