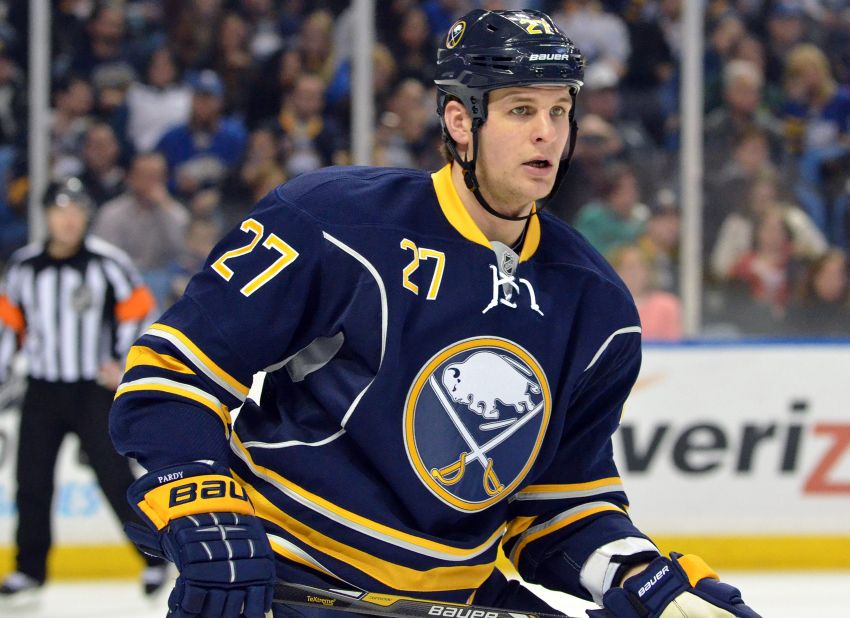 Adam Pardy should stay in the NHL the rest of this season. ©2013, Dan Hickling, Olean Times Herald

BUFFALO – There are some perks to hotel life, Adam Pardy said. Each day, a maid makes his bed and cleans his room. That’s not a bad thing, right?

For three months, the defenseman has been living out of a suitcase while shuttling between the Sabres and the Rochester Americans, an experience Pardy chalks up to being “one of those years.”

“It (stinks), but it is what it is,” Pardy said about hotel living Saturday after the Sabres prepared for tonight’s contest against the New Jersey Devils inside the First Niagara Center.

After waiting out the NHL lockout, the 28-year-old cleared waivers and was sent to Rochester, his first regular AHL stint in five years. Finally, though, in his third recall, Pardy should be sticking.

Now, with deadline having passed, the defensemen you see on the ice each night – the only six on the roster, in fact – should be the regular group the final 10 games this season.

It can be argued the blue line has been the Sabres’ greatest weakness this disappointing season. But in recent games, the defense has settled down nicely, showcasing the tight style many expected it would before the season.

“We expected some changes to be made,” Myers said about the trades. “The way this group has played the last two games is exactly the way we need to play every game coming into a season. I think if we would’ve started that way, we wouldn’t be battling for a playoff spot right now. We’d be right in the thick of things.”

For starters, Weber said forwards are supporting the defensemen better.

“We’re breaking out of our zone a lot easier just because of the support and the talk we have now in the D-zone,” he said.

“Maybe the message didn’t get through to some of guys the way that it’s getting through now, I guess,” he said.

Of course, some defensemen have started playing a sturdier game, most notably Myers.

Rolston has told Myers, a colossal disappointment much of his fourth NHL season, he doesn’t care if the former Calder Trophy winner gets another point the rest of the season. He just wants to Myers concentrate on playing well in his own zone.

Myers has embraced that philosophy, putting offense on the backburner.

“I think it’s been night and day from the start of the season until now,” Myers said about his play. “There’s always room for improvement for any player. I feel I’ve really simplified my game. It’s just a matter of jumping when … you see the opportunity.”

Myers has only four assists in the last 17 games and five all season. But the 23-year-old has played at least 23:59 in the last four games.

Then there’s Weber, a healthy scratch the first six games this season. Weber has started the last three years as an extra before earning regular duty. The gritty 25-year-old has played the last 23 games.

“Even when he was out of the lineup, he was a team-first player, which we want those players here,” Rolston said. “And then you add his battle, his competitive nature. He’s willing to do anything for the team.

“And then his game, he’s found what he has to do to be successful in the league. … He keeps things really easy.”

Weber believes he has matured with age.

“I’m getting a little wiser, maybe not running around a little bit,” he said. “I’m not trying to make those big hits anymore. I’m just trying play solid and physical down low.”

Pardy never got too low during his 75-mile trips on the New York State Thruway. He monitored the Sabres’ transactions while playing 21 AHL games.

“You always pay attention to what’s going on,” Pardy said. “You have to.”

These final weeks could be an audition for the Newfoundland native. He had two assists in Friday’s 4-2 win over Ottawa, his seventh appearance this season and second straight.

“He’s really steady back there,” said Rolston, who also coached Pardy with the Amerks. “He can move the puck. He’s got a really good attitude, great attitude, good teammate. I think that he just is looking for the opportunity in any organization now.”