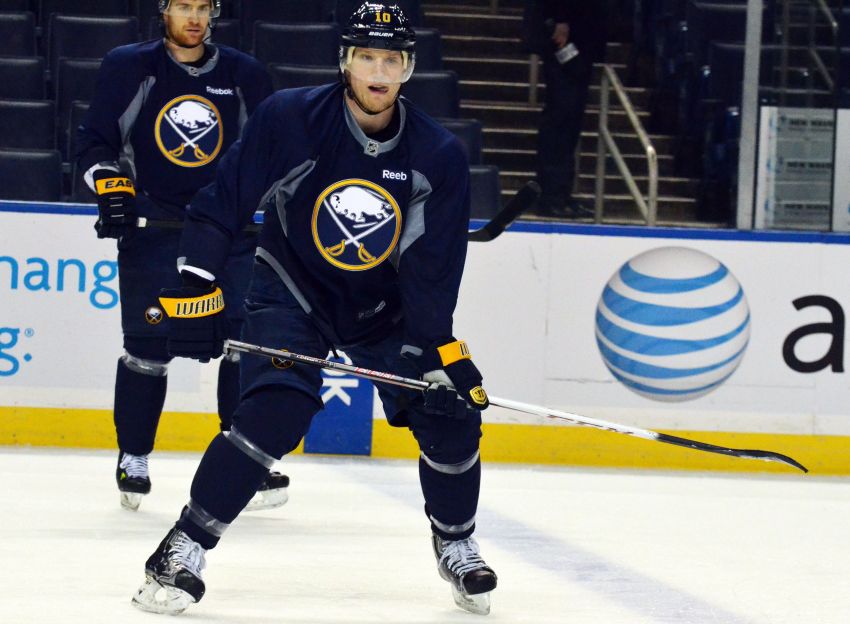 BUFFALO – Going back to the minors was difficult at first, Adam Pardy said. Other than a two-game conditioning stint last season, the Sabres defenseman had spent more than four years in the NHL.

Then the Sabres, who acquired Pardy from Dallas in July, waived the 28-year-old during training camp last month. Numbers kicked Pardy, the ninth defenseman in an eight-man race, back to the AHL.

“It’s something I’ve never went through before,” Pardy said Thursday prior to sitting out the Sabres’ 5-4 shootout win over the Montreal Canadiens inside the First Niagara Center. “It’s not an easy thing (for) guys that have went through that, being put on waivers, not knowing where you’re going to end up. Sometimes it’s hard to deal with.”

Now, after just one appearance, Pardy could be headed back to Rochester.

The Sabres summoned the 6-foot-4, 220-pound Pardy for Tuesday’s 4-3 loss in Ottawa when a muscle strain sidelined slick defender Christian Ehrhoff, whose return Thursday pushed Pardy out of the lineup.

“After a couple of laps I knew it wasn’t working,” Ehrhoff said.

But he pronounced himself ready after skating Thursday morning. Sabres coach Lindy Ruff had said the German was doubtful.

Ehrhoff’s been arguably the best player on the Sabres’ struggling defense, compiling five assists and a plus-2 rating through his first nine games.

Ruff played Pardy beside the struggling Myers on Tuesday, skating him 18:25.

“A good defender, solid in his own end,” Ruff said about Pardy. “He may have helped Tyler a little bit in that sense where (he’s) a pretty mobile big guy that can make the first pass and is tough to play against in his own end.”

Pardy embraced his first regular AHL action since 2007-08, turning heads during a five-game stint with Rochester.

“As the days go on you just get back to playing hockey,” Pardy said. “You got to realize it’s part of hockey. … You got to work (hard) to get back. There’s obviously other guys that are waiting to take your job.

“There’s a reason maybe why this happened. I didn’t take it too hard. I didn’t hang my head too much and go around pouting. That’s probably not the best approach to take. So you got to put your head down, you got to work.”

The Rochester experience helped Pardy enjoy coming to the rink again. He endured a rough season in 2011-12, playing only 36 times as he clashed with his coach.

“It was nice to go down there and actually play a lot of minutes, not have to worry about, ‘Am I going to be in the lineup or not? What’s going on? Is somebody moved? Am I going to be on waivers again?’” Pardy said. “So it was just nice to take that pressure off it and just go play and just kind of forget about it.

“You know what, if I get back up, I get back up. If not, I got to work my butt off to make sure I’m ready and show them that I’m working to get back.”

In other injury news, defensemen Robyn Regehr (lower body) and Andrej Sekera (bruised foot) skated Thursday morning and could return within days. The Sabres play the Islanders in New York on Saturday and host Boston on Sunday.

Update: Pardy has been returned to Rochester.