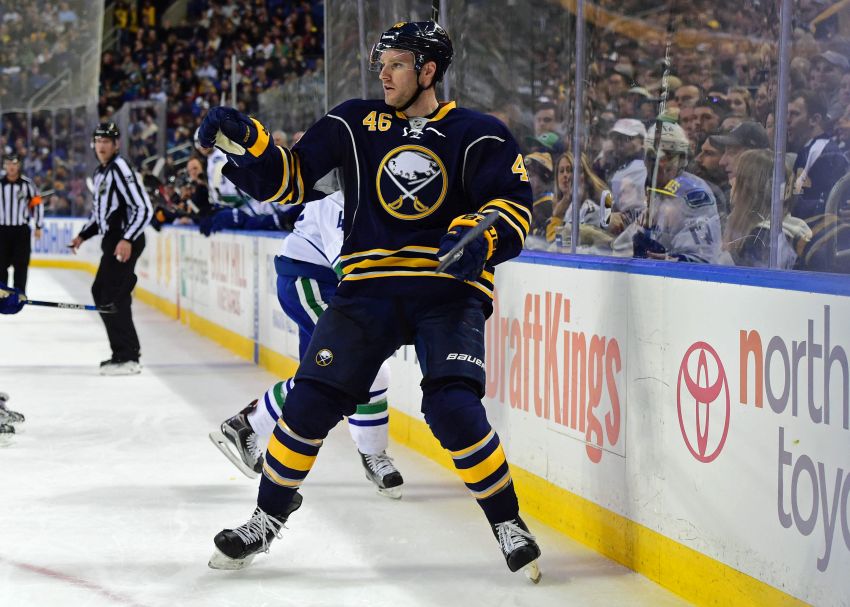 How remarkably healthy did the Buffalo blue line stay in 2015-16? The Sabres recalled a defenseman as an injury replacement just once.

Think about that. Over the course of the grueling six-month, 82-game season, the Sabres only dipped into the AHL on March 18, when they summoned Chad Ruhwedel to sub for Carlo Colaiacovo prior to their 72nd contest. Ruhwedel played that night and was quickly returned to the Rochester Americans.

The Sabres almost certainly won’t be so lucky injury-wise next season. Defense, of course, is a physically demanding position. Depth is critical, and right now they don’t have much.

But what happens when someone gets hurt? Bogosian has a recent history of injuries. Franson suffered a season-ending head or neck injury Feb. 19.

No other defenseman under contract has ever played more than 47 games in an NHL season.

The top option, recent signee Justin Falk, just won a Calder Cup, meaning he spent most of the season in the minors. The 6-foot-5 veteran is the only other defenseman with notable NHL experience, having played 171 games, including 24 in 2015-16 with Columbus.

After Falk, there’s Casey Nelson, who compiled four assists in seven late-season NHL games. Nelson, 24, is raw and probably needs a full AHL campaign after jumping from the NCAA to Buffalo in March. He shouldn’t be relied upon for big minutes.

The only other defenseman under contract with NHL experience, Taylor Fedun, has played 12 games in four professional seasons.

That’s hardly an impressive group for a team that believes it will be a legitimate playoff contender.

Will the Sabres really go far if Fedun is skating big minutes in critical games?

A year ago, Colaiacovo, a veteran of 470 NHL games, served as the eighth defenseman. On their current depth chart, Nelson, who has three weeks of pro experience, is No. 8.

Colaiacovo, 33, is still available. Sign him. He’s cheap, smart and understands his role well. He takes immense pride in mentoring young talent and being a good teammate. If he plays 70 games or 36 like he did in 2015-16, he won’t lose his smile or complain.

The Sabres thought enough of Colaiacovo he started last season as Ristolainen’s partner. The former first-round pick is still capable of competing with 20-somethings.

There are other options. Fans might not like this one, but the maligned Mike Weber, who was traded to Washington in February, is still unsigned. The gritty Weber bounced back last season following two wretched campaigns. He offers some solid depth.

Maybe the Sabres plan to make more defense moves. Perhaps they think junior prospect Brendan Guhle, who wowed at training camp a year ago, can earn a roster spot.

Whatever the case, they’re not going to be as lucky as last season, when notable injuries to Bogosian, Franson and the since-traded Mark Pysyk never overlapped.