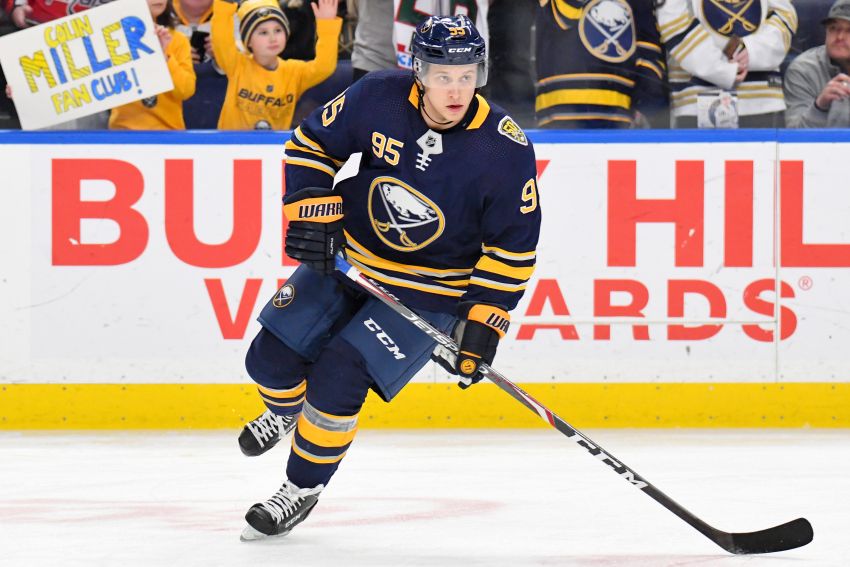 BUFFALO – It was in 2016, after Keith Aucoin returned home following a championship season overseas, when he called a friend in the scouting business and asked if he had heard of a young, undersized center turning heads in Germany.

The scout knew nothing about Kahun, who had grabbed Aucoin’s attention during their first year as teammates with Red Bull Munich.

“I’m like, ‘Well, you guys might want to take a look at him,’” said Aucoin, a former AHL scoring champion who played 145 NHL games.

Today, Kahun is one of the Sabres’ most intriguing talents. After arriving from the Pittsburgh Penguins before the Feb. 24 trade deadline, he quickly made an impact, scoring two goals and four points in six contests.

Kahun, who plays winger now, scored barely two minutes into his Sabres debut. In their last outing on March 9 before the NHL suspended its season indefinitely because of the COVID-19 pandemic, his shootout goal secured a 3-2 win over the Washington Capitals.

“His skill, his speed, he’s added a definite tool to our kit, which is nice,” Sabres coach Ralph Krueger said earlier this month following a practice inside KeyBank Center.

Having spent most of his career in Europe, Krueger first saw Kahun play as a teenager.

“We definitely had him tagged as an NHL player back then already,” he said.

Very few people in North America, it seemed, knew much about Kahun a few years ago. But Aucoin said Kahun wowed him right away in his first weeks with Red Bull.

Aucoin hadn’t heard of Kahun until he joined Munich that season. Other than two junior seasons in the Ontario Hockey League and an appearance at the New York Islanders’ development camp in 2015, Kahun had spent the rest of his career in Germany.

Aucoin saw Kahun possessed the mind – “He knows what he’s going to do with the puck three seconds before he does it,” he said – to complement his skill.

The lack of interest from North American teams surprised Aucoin. He figured the smaller ice surface would benefit him.

In 2015-16, Kahun was beginning his second season in the Deutsche Eishockey Liga (DEL), Germany’s top pro circuit. Red Bull had loaded up, adding Aucoin and some other notable players with NHL experience.

Red Bull would win the first of three consecutive championships that season. Kahun, meanwhile, was developing into one Europe’s best talents.

“He kept getting better every year,” Aucoin said. “So you could see his improvement. He was getting bigger, he was getting stronger.”

Kahun was also getting more attention. The NHL was finally taking notice of his exploits. Scouts started showing up in Munich to watch him.

He added: “(He’s) really kind of quick, speedy. Kind of like one of those guys where you’re in a phone booth with him and you can’t catch him.”

It was only a matter of time before Kahun left Munich. NHL teams love snaring underappreciated talent from overseas. For the price of an entry-level contract, you might have a hidden gem.

“By the time that second year started to come around, as a team we were all afraid we were going to lose him somewhere,” said former Munich goalie David Leggio, a Williamsville native who once starred for the Rochester Americans.

Kahun’s NHL teams have listed him at 5-foot-11 and around 175 pounds. He might weigh that much, but that height is very generous.

That size might’ve scared off NHL clubs from drafting him. When Kahun joined the Sudbury Wolves for his draft year in 2012-13, small players were still a bit of an anomaly in the big leagues.

“It was still a little bit of the age of bigger, stronger, etc., kind of guys,” said Trent Cull, Kahun’s coach with Sudbury as a rookie. “That’s where maybe this smaller stature guy maybe wasn’t going to be as effective.”

But Kahun’s diminutive stature never slowed him down growing up in Germany. As a teenager in Mannheim, he was often electrifying.

Kahun, of course, wanted to play in the NHL someday. But he was happy at home. As a child, he simply dreamed of making the local third-league team.

“That was my biggest goal, to maybe play there one day,” said Kahun, who was born in the Czech Republic but moved to Germany when he was a baby.

Kahun parlayed those dynamic seasons into a stint with the Wolves. He played well in the OHL, scoring 22 goals and 71 points in 101 games.

“It’s not like he was out charging around or hitting anybody, but I’ll tell you one thing, (his size) was never an issue for him of competing or playing against bigger guys,” Cull said.

Kahun returned home in 2014 without an NHL contract. But having set another goal of playing in the DEL, he was unfazed by the snubs.

“He was a good little hockey player,” Cull said. “Actually, we had draft picks, etc., at the time, and I was like, ‘Man, this kid is way better than half the kids we got here,’ you know what I mean?”

‘Lighting up’ the DEL

In their second season together, Aucoin said he talked to Kahun about returning to North America.

“Just to see where his head was at,” he said. “I was kind of pushing him to go give it a try, at least for a year. Whether or not he made the NHL, or the AHL, just give it a try, see what happens.”

Aucoin said he told Kahun his game would translate if he continued to develop.

“Did I know it would develop into what he was doing now as quick as he has done it?” he said. “I definitely didn’t think it would be that quick. I thought it would have to be a little bit of a learning curve. But he jumped right in.”

Kahun would bypass the AHL completely.

In addition to the scoring prowess he showcased in the DEL – he compiled a career-high 12 goals and 41 points in 42 games in 2017-18 – Kahun looked impressive on the international scene, helping Germany earn a surprising silver medal at the 2018 Pyeongchang Olympics.

Smaby called Kahun a “game-changer.” Leggio said “he was lighting up the German league.”

Kahun also possessed the work ethic to match his skills.

“From the very first step he took on the ice for practice, he does every drill as hard as he can,” said Don Jackson, Kahun’s coach with Munich. “So then he’s always out there doing extra.”

Smaby said: “Just having experienced it as a teammate, (I know) how much he cares, how much pressure he puts on himself to do well.”

Kahun said four NHL teams showed interest in him. The Sabres weren’t among them. He chose the Chicago Blackhawks because they spoke to him first.

“I had the best feeling right away that Chicago would be the best fit for me, and at the end, it was the right choice, for sure,” said Kahun, who signed a two-year, entry-level contract in April 2018.

Kahun enjoyed a strong rookie campaign with the Blackhawks, scoring 13 goals and 37 points in 82 games. But he lasted just one season in Chicago.

To acquire defenseman Olli Maatta from Pittsburgh following last season, the Blackhawks had to part with Kahun and a draft pick.

Kahun played 50 contests with the Penguins before they dished him to Buffalo in exchange for forwards Evan Rodrigues and Conor Sheary.

While Kahun has spent about a month with Buffalo, he has possibly found a home. The Sabres, one of the league’s laughingstocks, sorely need top-end talent.

Whenever the Sabres play games again, Kahun should have a role on a scoring line. Before the season stopped, he was enjoying duty at right wing on the second trio beside center Marcus Johansson and Victor Olofsson.

After struggling to adjust in Pittsburgh, Kahun acclimated to the Sabres right away.

“Hockey’s always fun for me, but obviously with the different tactics and all the different systems, the system in Pittsburgh … I had to do other stuff,” he said. “So here the hockey’s more fun for me again.”